Porsche Vision GT: the Car that Only Gamers can drive

On Monday Porsche revealed its Vision GT Concept. A futuristic racing car that will be featured in the upcoming Gran Turismo 7 releasing early in 2022 as a Play Station exclusive. 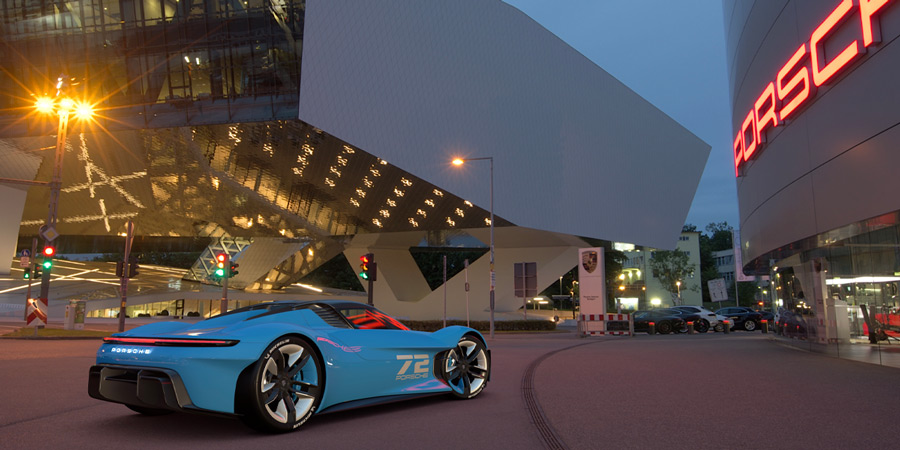 This is only the latest concept designed by an automaker for this series developed by Japanese Polyphony Digital. And Porsche has been featured in it since 2017, right after the expiration of its exclusivity contract with Electronic Arts.

Even before the announcement, the partnership between the German automaker and the Japanese developer was evident as several other Porsche’s vehicles were heavily featured in the new game’s trailers over other brands.

But what is the impact of the Vision GT project for an automaker? And how has the game impacted the younger generations and OEM’s marketing?

Polyphony Digital, like a number of different smaller game developers, is a subsidiary of PlayStation Studios a division of Sony Interactive Entertainment since 1998.

The Studio was actually founded in 1994 under the name Polys Entertainment, and it was in this period that the first Gran Turismo was released for Play Station along with a couple more titles. The success was immediate, and since then it has remained pretty much the only franchise developed by Polyphony with 12 editions released so far.

The first edition alone sold an estimated 10.8 million copies. And the trend continued. According to Goodwood’s website, the Gran Turismo franchise sold over 85 million copies worldwide which puts it in third place among the best-selling racing games of all time. Head of Polyphony Digital Kazunori Yamauchi, in an interview earlier this year, confirmed the success of the latest release Gran Turismo Sport (2017) reaching 9.5 million users.

The game’s popularity has increased as well on streaming platforms after the pandemic. With people forced at home, virtual entertainment experienced a massive boost as highlighted in the article How Covid-19 Turbocharged the E-Sports Racing Industry for official e-racing competitions. The same happened for enthusiasts’ streaming channels with some of the most popular sim-racing platforms such as iRacing and Assetto Corsa reported with the Bentley and Fanatec Partnership deal.

Gran Turismo Sport, since its release in late 2017, experienced the same growth from 2020 on with a peak in viewership of over 30,000 people on May 14th, 2020, which is very good considering the game was already almost 3 years old.

Its presentation trailer released on YouTube in June 2020 has so far reached 10.7 million views, and it is only slightly behind a Need for Speed one from 2019 that reached 11 million clicks as the most-watched racing game presentation trailer. It is also ahead of its most direct competitor on Microsoft’s platform Xbox, the Forza franchise.

So, it is clear how Porsche’s and other automakers’ investments in the development of these concepts, which are usually realised as full-scale models too, has an important return. The capacity of influencing young generations of enthusiasts by transforming them into brand supporters and potential future clients. As mentioned by Luca Venturi during our interview some of those who went on to buy a specific luxury performance car as adults were influenced in their choice by the games they played and “their dreams” as children.

“We can engage young and digital target groups in the place where their automotive dreams are born: the world of gaming”

The series of events, and especially the World Finals in 2019 involved a number of personalities including several well-known internet celebrities as well as Formula One drivers such as Lewis Hamilton and Max Verstappen. This kind of participation and media coverage gave the Gran Turismo Championship huge popularity and several million views.

Additionally, involving this kind of audience, not only promotes easier access to motorsport to a wider audience but introduces also the possibility of a transition from sim-racing to real-life racing. By fulfilling a series of requirements, gamers can become eligible for the “FIA Gran Turismo Digital Licence” from their local national sporting authority.

All these factors combined created the incredible appeal of the Gran Turismo Franchise. And this is the reason why so many brands bought into this marketing opportunity with the likes of Lamborghini even presenting its concept officially during one of these events. 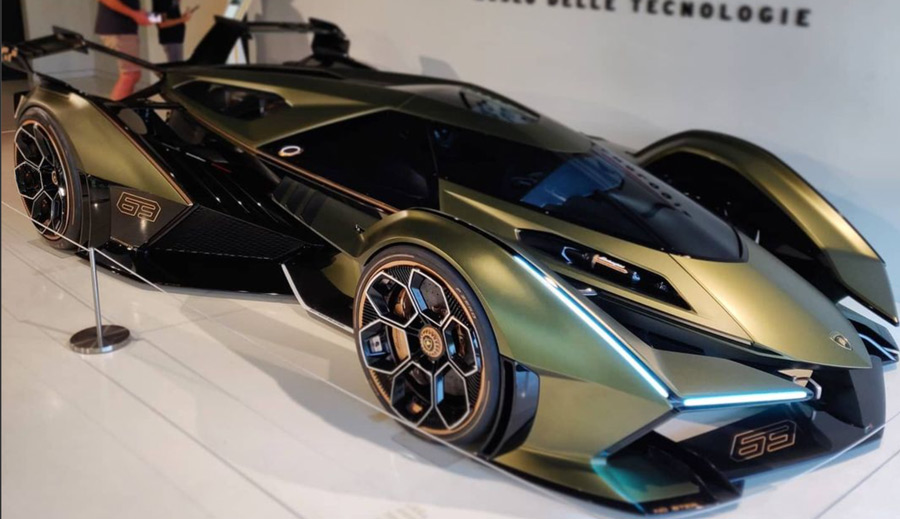 The Porsche Vision GT will be only available in the upcoming game, and apart from the full-scale model it will not be produced in any other real-life form. However, the release of this model shows again Porsche’s forward-looking approach to the market.

A team of young designers that developed this car, had much more freedom not being constrained by real-life restrictions and technical requirements. This is not to say that the car was developed just to showcase an eye-catching yet unrealistic design. It actually appears much more grounded in reality than several concepts developed by competitors, while still looking at the future. 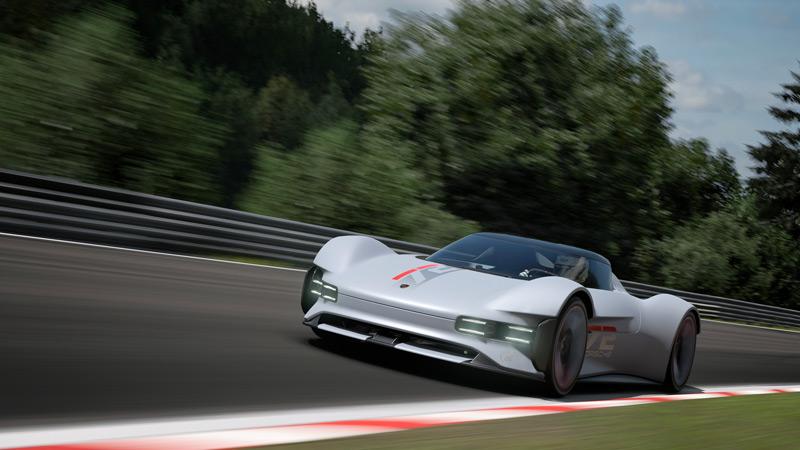 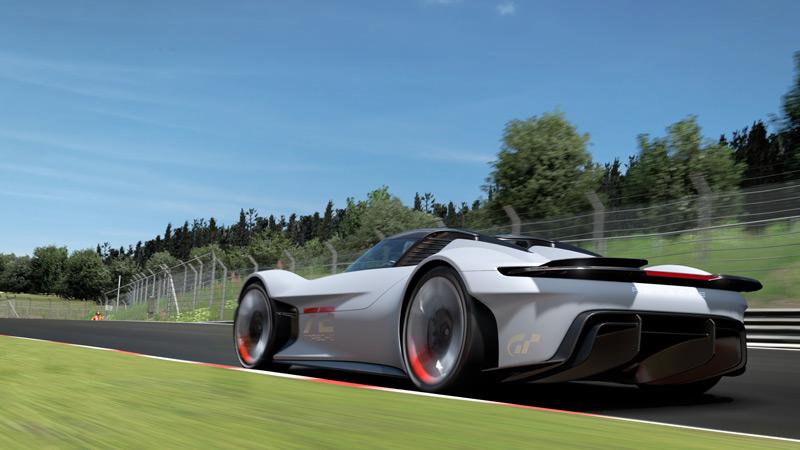 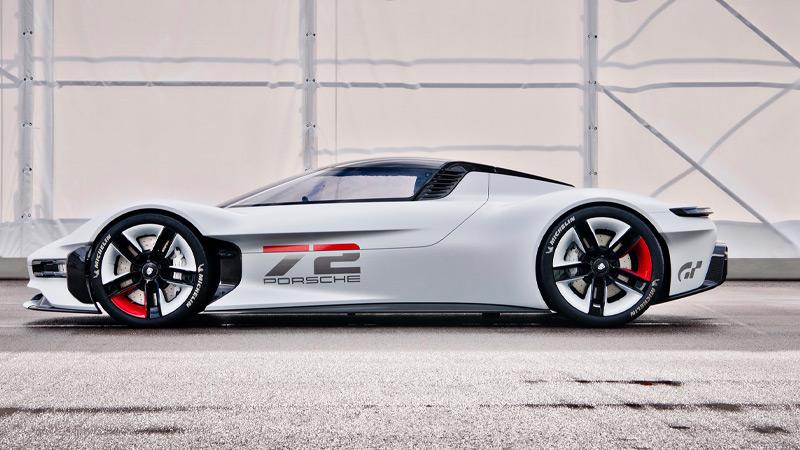 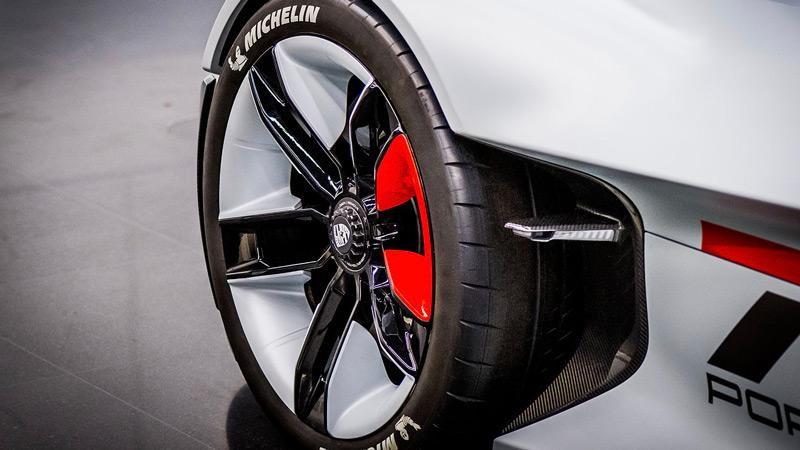 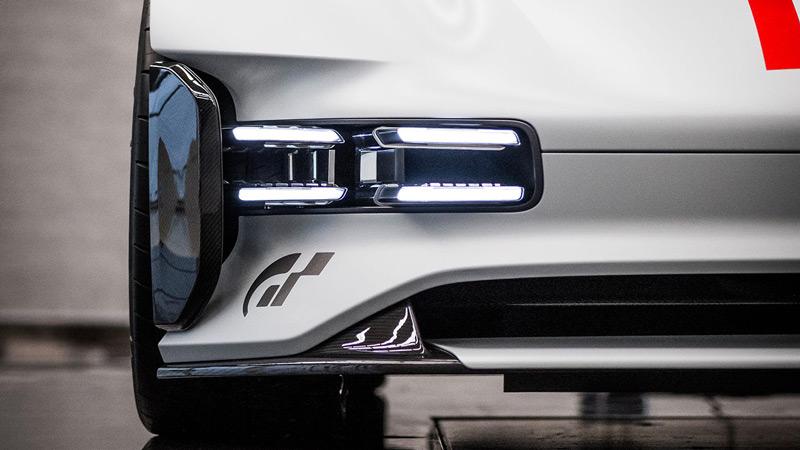 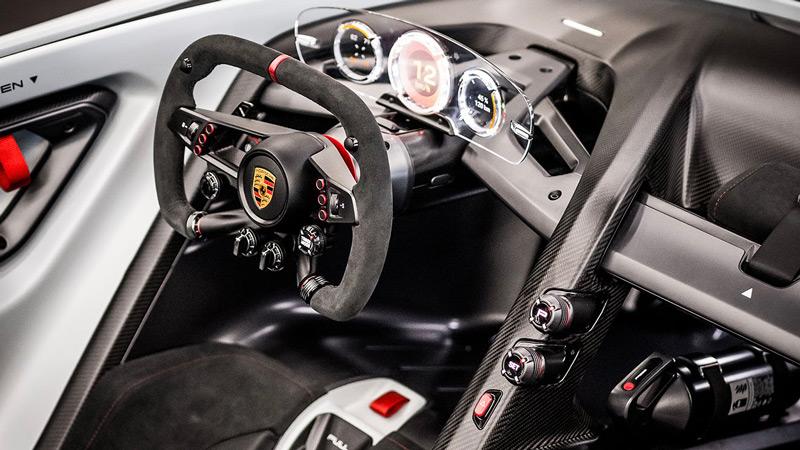 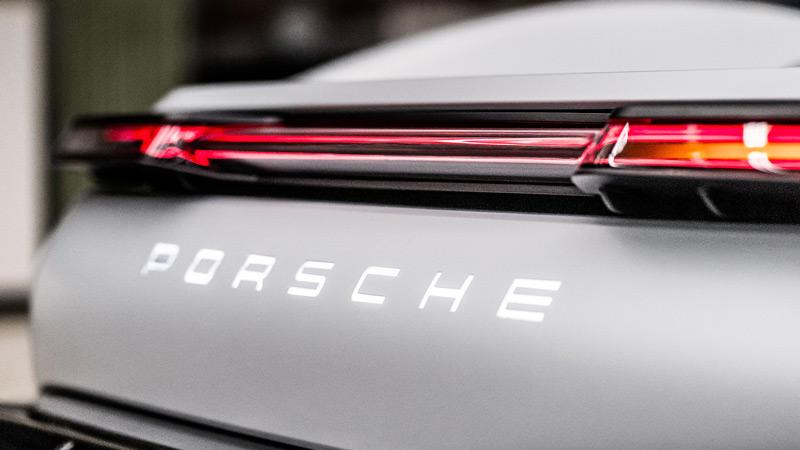 The company, in fact, highlighted how the Vision GT is undeniably Porsche bringing the brand’s DNA into the design with specific cues such as the low sloping lines, pronounced wheel arches, quad headlights, and rear light bar recalling the likes of Porsche Taycan and 911 992. In the presentation, they also took the time to showcase the team’s attention to sustainability pointing out how the concept was entirely built using sustainable materials. And finally, they provided technical details about its performance as well:

However, one element that was not mentioned but probably shows even more how the company is looking at its future market is this design’s resemblance with that of the Mission R presented at IAA in Munich earlier this year.

Several design elements in the front and even more in the back, as well as the overall shape, are clearly born from an evolving but univocal and cohesive design language. 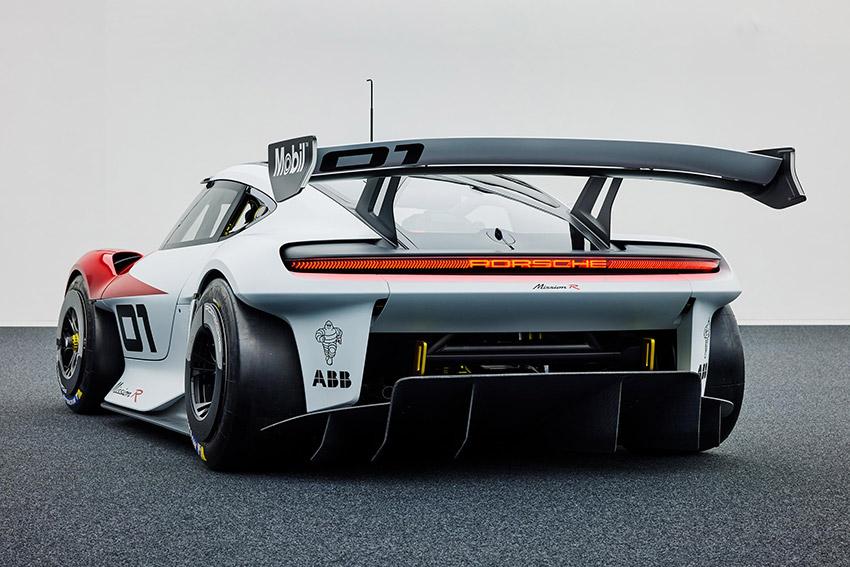 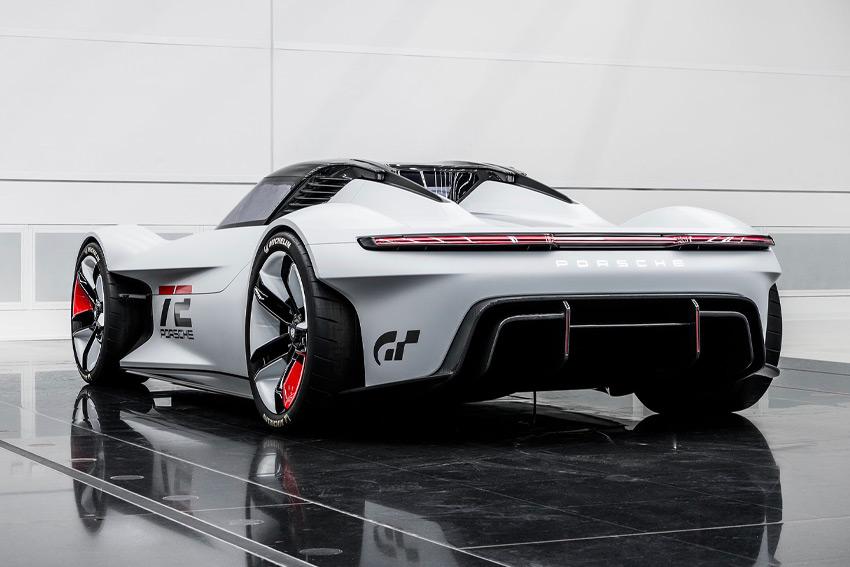 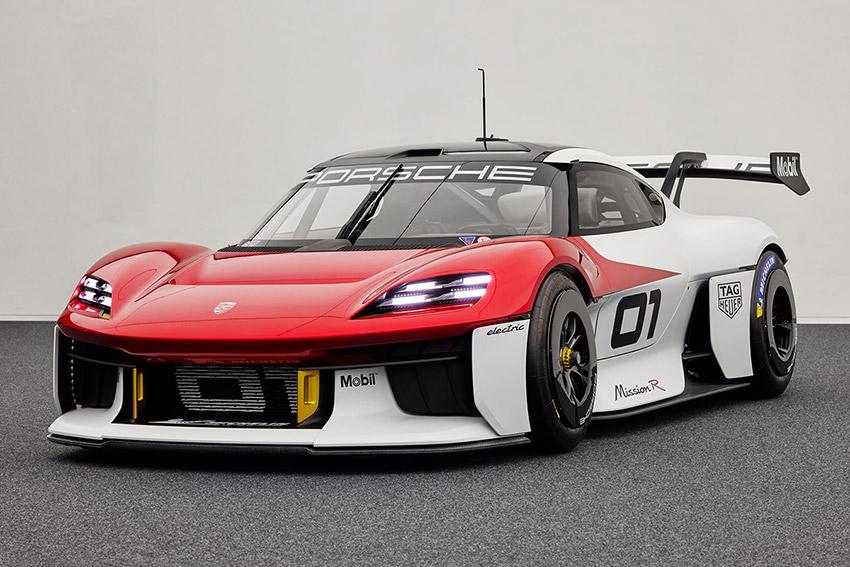 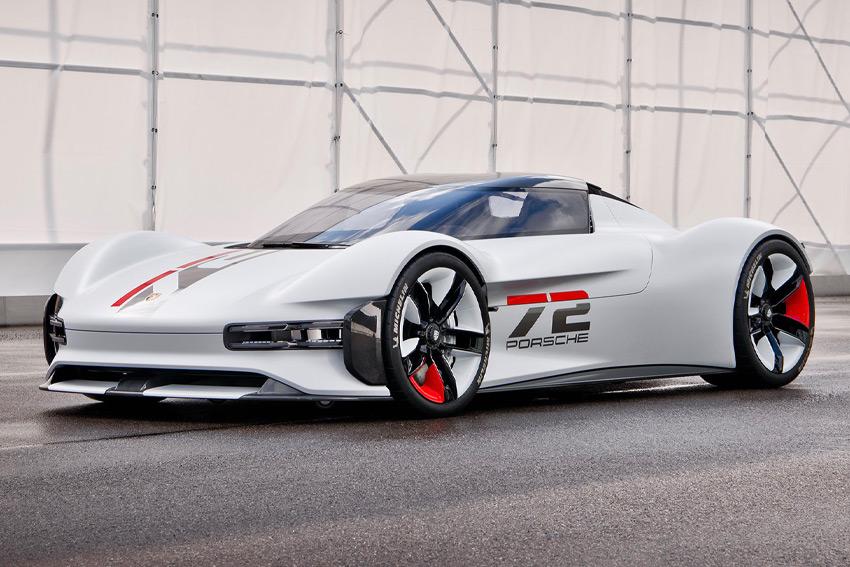 A rumour that started right after the unveiling of Munich hinted that Porsche might have planned to introduce the Mission R as a substitute for the stagnating 718 line by 2024. This would be appealing for the young audience in China (Porsche’s biggest market), where the average 718 buyer is 31 years old. Porsche is also going to make the new Mission R its most innovative model in terms of interior technologies, once again showing its focus on the younger audience that this car is more targeted towards. In this context, creating the “hype” for the brand and, even more, for a specific design language in the audience that in a few years might be able to afford a sports car makes even more sense.

With the goal of creating an immersive and long-lasting brand experience, Porsche enhances its digital entertainment partnership making it an integral part of its marketing mix.