It is from last week, an important announcement by Bentley regarding a further step into the world of e-sports with a unique initiative and the collaboration with an extremely active player within the sector: Fanatec. But first, let’s see what has been going on so far.

Back in 2020, right after the pandemic hit, the world of motorsport experienced a significant and sudden change. Sim-racing, like official virtual competitions in numerous other fields and videogame genres, was already on the rise. But the global lockdowns, and other health and safety measures put in place to contain the spread of the virus gave the booming e-sports industry a further push.

The mean of choice for this were the various Livestream platforms on the internet. Countless personalities, both born online and coming from real racing (such as almost the entire new generation of Formula 1 drivers) found themselves spending more time involved in e-sports events.

In addition, leagues and brands joined the movement organising major events and racing leagues like never before. Along with Formula 1 continuing its official e-championship, FIA WEC Le Mans Virtual 24 hours was also held for the first time.

The audience increase is clearly reflected in the number of views and hours watched recorded by Twitch for major racing simulators such as iRacing, Assetto Corsa, and Assetto Corsa Competizione.

Most importantly, looking at the data, the trend started in 2020 so far does not look like just a short-term change, but consistent audience interest suggests that the e-sports increased popularity is here to stay. And it is one that will eventually benefit the real-world racing leagues as well.

Fanatec is one of the world’s leaders in sim-racing hardware development including steering wheels, pedals, force feedback, and cockpit setups for all the major consoles and PCs.

Fanatec’s parent company Endor AG was founded in 1997, but the brand has gained a lot of popularity thanks to the mentioned rise of sim-racing and official e-sports leagues. The firm in fact previously started partnerships with Porsche upon its return to the 2021 Esports Spring Challenge Canada, F1 Esports Pro Series, NASCAR, eSports WRC Championship, and SRO E-Sport GT Series.

The good performance of the company is reflected in its 2020 financial statement. Its share price recorded at a low of €31 in March reached an all-time high of €149 in October, and an overall +254% in 2020.

Not only Endor was not strongly affected by the pandemic aftermath, but the market conditions actually benefitted the company. Revenues in 2020 were up 146%, reaching €88.1 million, net income was also up by 300%, from 2019’s €3.98 million to €15.96 a year later. The outlook is extremely positive for 2021 as well, with revenues up by 84% from €11.9 million to €21.9 million in the first quarter and forecasts predicting sales for the 2021 full year to reach the low three-digit million range for the first time in the company’s history.

So, back in April 2020, Bentley announced its first participation in an official e-sport series. The 2020 SRO E-Sport GT Series in the ‘Pro’, ‘Silver’, and ‘Am’ class.

Last week the automaker announced a truly unique partnership with Fanatec. They developed a special steering wheel dedicated to both Bentley’s Continental GT3 Pikes Peak and virtual racing. The car takes its name from one of the most famous Hill Climb races for which it has been specifically tuned, called Pikes Peak International Hill Climb. The wheel is realised using high-quality lightweight materials such as carbon fibre and magnesium alloy, and it is definitely a first of its kind. As for its characteristics, according to Bentley’s statement:

The centre of the GT3 steering wheel is given over to a circular digital display that offers the driver vital telemetry and information about their performance.

Exclusive Bentley design details include signature knurling on the rotary encoders. Other key features include a forged carbon display bezel, two 7-way FunkySwitch directional sticks with encoder functionality, a pair of aluminium thumb wheels with optical encoders, and four magnetic paddles – two for gear shifting and two auxiliaries, based on the design of the Continental GT road car. 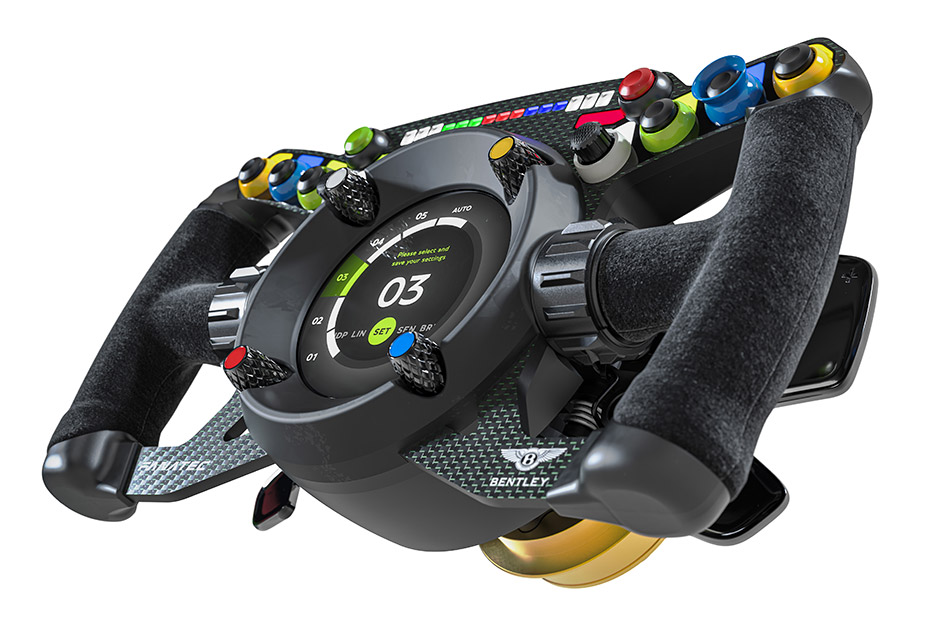 The project represents a unique opportunity for enthusiasts and car owners to experience sim-racing with unprecedented levels of realism. But it does not end here.

This initiative brings attention to the event itself in which Bentley already holds two important records. One for the fastest production SUV with the 2018 Bentayga and one for the fastest production car with the 2020 Continental GT. In 2021 however, Bentley missed the desired result mainly due to a technical issue that caused the car a power loss. Nonetheless, the GT3 finished 4th in the overall rankings. 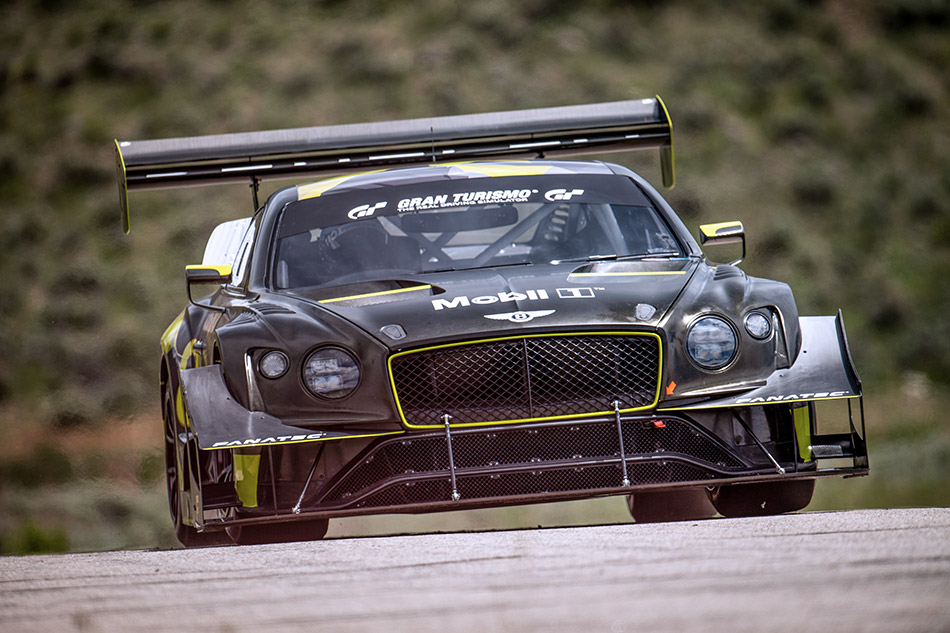 There is another important aspect of this initiative that ties into Bentley’s renewed strategy to become the most sustainable luxury car manufacturer. The specially built GT3, mounting a revised twin-turbocharged V8 and producing 750 bhp and 1000 Nm of torque, is designed to run on zero-emission renewable synthetic fuels.

Also, going back to the collaboration with Fanatec, Bentley’s choice to develop a special steering wheel for this specific event is also important as Pikes Peak presenting sponsor is Gran Turismo, one of the most well-known virtual racing and driving series ever. So, as a marketing tool, this collaboration is perfectly positioned in an event set to attract esports enthusiasts along with ‘regular’ motorsport fans.

In broad terms, in fact, this partnership is relevant to Bentley’s marketing strategy for strengthening a new platform as e-sports gain popularity and reaffirming the importance of the brand’s motorsport identity and heritage.

This partnership is not only a unique project and an important step for Bentley’s strategy, but also extremely interesting for what it indicates about the motorsport industry’s direction. New integrations between virtual and real-life racing emerge almost every day both in motorsport as a development tool and in the entertainment sector. With increasingly refined hardware developed by the likes of Fanatec, software and graphic engines like Unreal, further integrations of AI, and Virtual reality all working alongside automakers the potential future scenarios are numerous and the boundaries between real and simulated racing will likely become more blurred than ever. More to come soon!