BMW has recently introduced its vision for the sustainable automotive industry and car of the 2040. The i Vision Circular. A compact four-seater developed with the objective of exploring what more can be done by automakers in terms of sustainability. The final aim with it is to begin the journey to become the most sustainable automotive company in the world. A claim that we have already seen by other companies such as VW, or Bentley (part of the same group), as nowadays, like in any other industry, sustainability has become a key marketing factor.

This is extremely important because, while in the short-term can induce some to promote the proverbial “greenwashing”, in the long term translates into a win-win situation for consumers and OEMs. 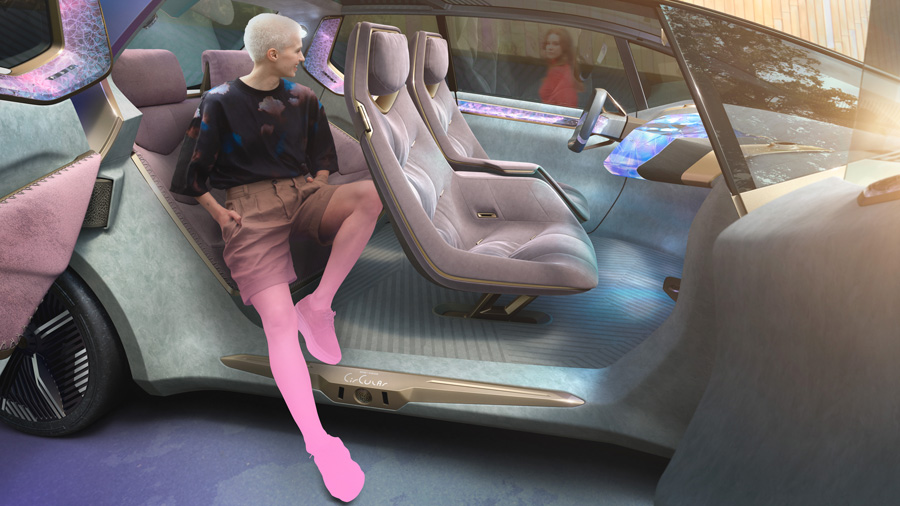 Circular economy, introduced when discussing sustainability in luxury automotive, aims at saving 100% of the used materials, avoiding wastes, and establishing a closed-loop through reuse, repair, and recycling. Ideas and concepts are several. But, how is the circular economy working for the industry? And how it has been employed so far?

BMW gave this new strategy a graphic representation and synthesised it in its four pillars: Re:think, Re:duce, Re:use, and Re:cycle. These have been applied to the i Vision Circular concept.

This is the initial phase that involves rethinking the production process of the car as well as its life cycle. It starts then from conceiving how to build the new model using as few materials as possible. The first example of this (and something that other automakers have already tried in the past) is the absence of bodywork paint. The i Vision, in fact, showcases the anodised aluminium body, and no paint is used on any component both inside and out.

Secondly, there is the energy-saving problem. Today, several automakers are already moving their production facilities toward carbon neutrality, reducing drastically the waste of water and recovery the heat that was previously dispersed to produce energy.

Rethinking involves also the engineering and composition of materials in a simpler way to make them easier to disassemble and replace.

Last but not least, in the rethinking of the entire process falls also the the supply chain's reshaping, and as discussed previously the blockchain has an important role to play, and BMW is already applying its technology

The reduce principle is expressed well by the “do more with less” saying. It can be particularly challenging for automakers in the premium and luxury segments. Modern-day cars in these markets usually boast refined exteriors and complex interiors with an extreme variety of materials. This is also something that clients have come to expect when buying a car from any of these automakers.

BMW however tries to show the way to achieve that premium feel while still reducing the use of different materials. Chrome and other trim elements are completely absent on the outside. Instead, the digital technology used for the headlights replaces the traditional “BMW face” integrating the “kidneys” and providing the option to even modify their aesthetic look. 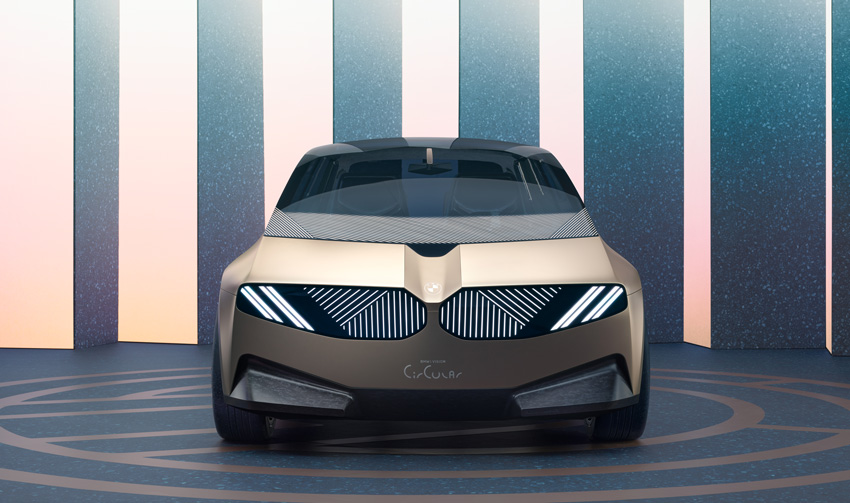 The same theme is present in the minimal interior with the prevalent use of alcantara and textiles, a few trim elements, and other glass components, used as digital surfaces for the various software integrations of the future.

In the context of recyclability, modern technology plays a big role in many ways. Digital integration is the first. Thanks to OTA updates, in fact, the ever more important car software can stay up-to-date for several years, without any need for hardware components substitution or upgrade.

Secondly, BMW envisioned a system of easy-release mechanisms that allows the quick substitution of worn-out or damaged components.

The two aspects together ensure a much longer product life compared to current cars. 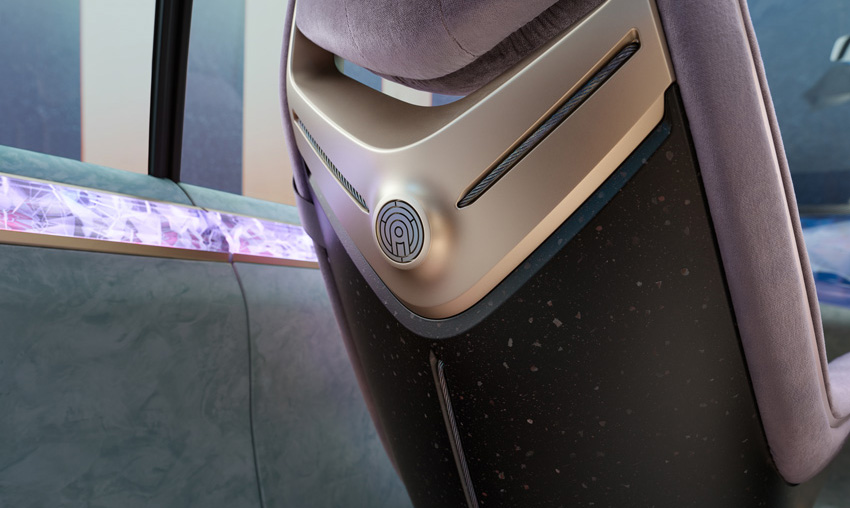 The previously mentioned reduced use of materials, along with the single component quick disassemble mechanism, make recycling much easier and more advantageous.

The i Vision Circular is, in fact, already built from 100% recycled materials. And this is the final principle that creates the circular economy. Keeping every component within the loop of use and repair, reuse, recycle, and remanufacture.

As mentioned at the beginning, BMW is not the only one experimenting with concepts to visualise a concrete future for the company.

Direct competitor Mercedes-Benz did it a year earlier with the Vision AVTR (standing for Avatar, the 2009 movie from which the initial concept of the car was derived). Different from BMW, Mercedes focused much more on technological and driving experience evolution while still maintaining a focused eye on sustainability. And, as incredible as it seems, a working prototype has been realised as well.

The Vision AVTR aimed at creating a fluid object that looks and feels less like a car and more like a natural element with which we can interact. So, gone are the steering wheel and other traditional commands, substituted by a minimal central console and some visual light-activated controls. 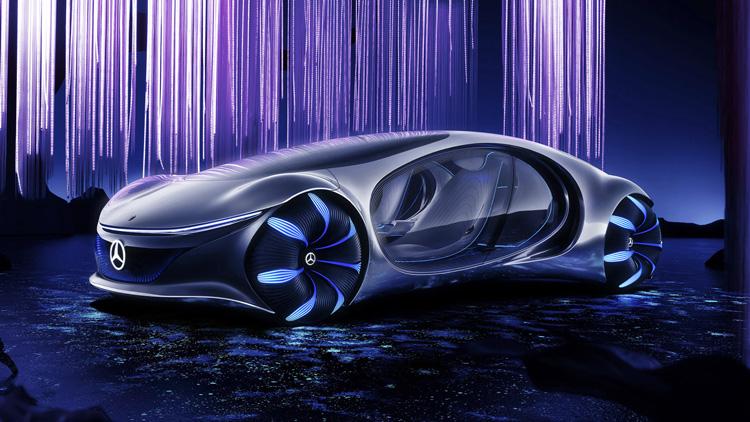 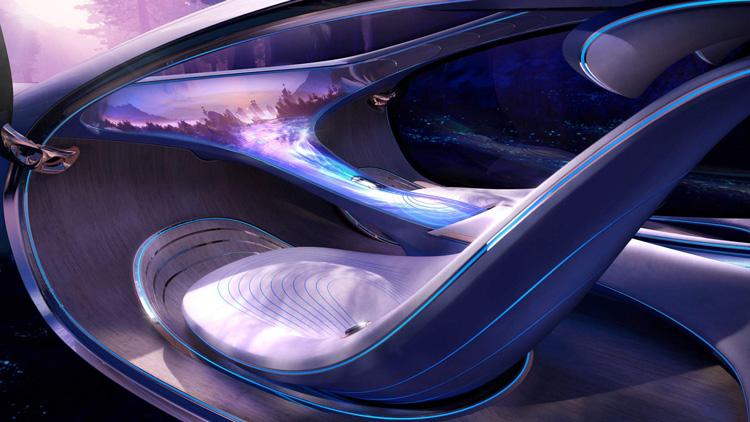 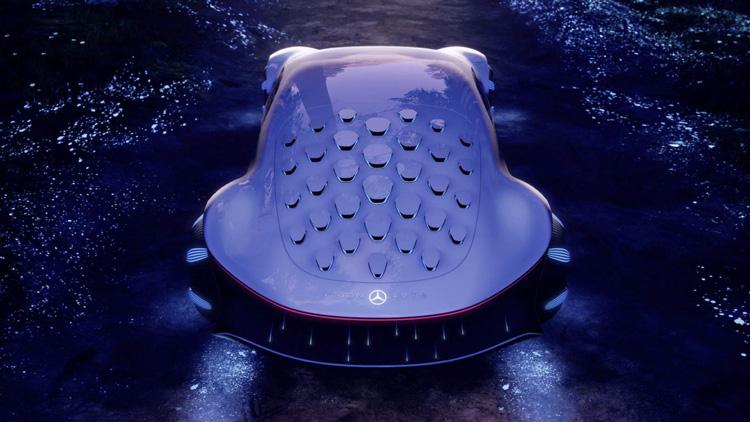 The overall prototype concept seems much farther away compared to the BMW one, but Mercedes paid attention to the current direction, by using 100% recycled and sustainable materials that could be reused too.

Back in 2019, Bentley showcased its vision of a sustainable future in perfect style with the EXP 100 GT. This car in a way is closer to BMW’s concept but takes a different approach.

While it looks to evolve the user experience through technology, as it happens in the i Vision Circular, is not completely revolutionary and unprecedented in that respect as the Mercedes Vision AVTR. It actually attempts (and arguably succeeds) to preserve the same refined and luxurious experience of any other Bentley, while being completely sustainable. But the EXP 100 GT does not follow the “do more with less” principle. Instead, both interior and exterior feature a wide variety of materials, that are however all sustainable and sustainably sourced. This likely entailed next-level material research efforts, as the concept features unique things like recycled rice husks paint, wine-making derived leather-like interior upholstery and more.

What about the industry?

As of now, all the attention in the industry’s sustainability has been focused on powertrains emission and the transition toward electrification. And major automakers are rushing to adapt their strategies to this change that is coming faster than expected.

The European Commission expects to reach 30 million zero-emission vehicles on the road by 2030 in the continent. According to McKinsey in this scenario, a third of the total carbon emissions will actually come from materials production, and this percentage could go up to 60% by 2040. Especially, considering that Evs' production material emissions are calculated to be 1.5 to 2 times higher than those of an ICE.

Investigation into BEV vs. ICE life-cycle and material emissions

So, circular economy can already be considered as important as the powertrain transition for the decarbonisation of the industry. This shift can happen through the collaboration of various stakeholders in defining common objectives and best practices within the entire value chain in order to define a new industry standard.

In this sense, the most important industry-wide initiative so far is arguably the “Circular Car Initiative” developed at the beginning of the year by the World Economic Forum along with McKinsey and Accenture.

Starting from the analysis of carbon emission reduction from material production, the report defines several measures that can be taken to direct the industry and EV manufacturing in the right direction. Through the visualisation of abatement cost curves, it is possible to analyse the impact of the decarbonisation of various components both in terms of CO2 emissions reduction and costs (or savings).

Two major contributors to EV production’s emissions are steel and batteries, with the latter also representing the biggest difference between EVs and current ICEs, as visible in the left part of the graph above. Steel instead constitutes around 50 to 60% of the vehicle weight and can account for up to 40% of its material-related emissions (something that BMW is addressing as well in a separate project). Below are the abatement cost curves relative to these two components. 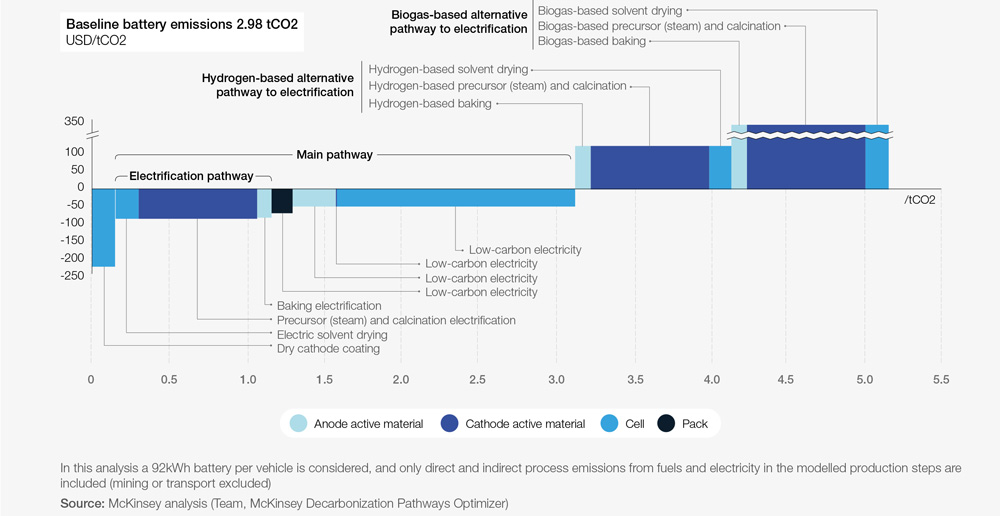 To achieve these complex goals the WEF Circular Car Initiative suggests a collaborative and non-competitive behaviour around specific topics that should involve the major number of stakeholders possible. The five key areas identified are:

Within the increasingly faster growth of the EV sector, production material circularity will become a central topic in the decarbonisation discussion. Not many players in the industry have shown a pro-active attitude toward this subject. BMW brought the issue to the public eye thanks to its concept presented in Munich and offered an interesting and feasible solution that addresses several questions raised at the industry level.