Differently from the example of marketing strategy analysed in the previous article, this one might seem less ‘unexpected’. It is noteworthy nonetheless for the range of business aspects it involved and ultimately for its daring commitment, which was instrumental for the company to recover from one of the worst financial years in its history. 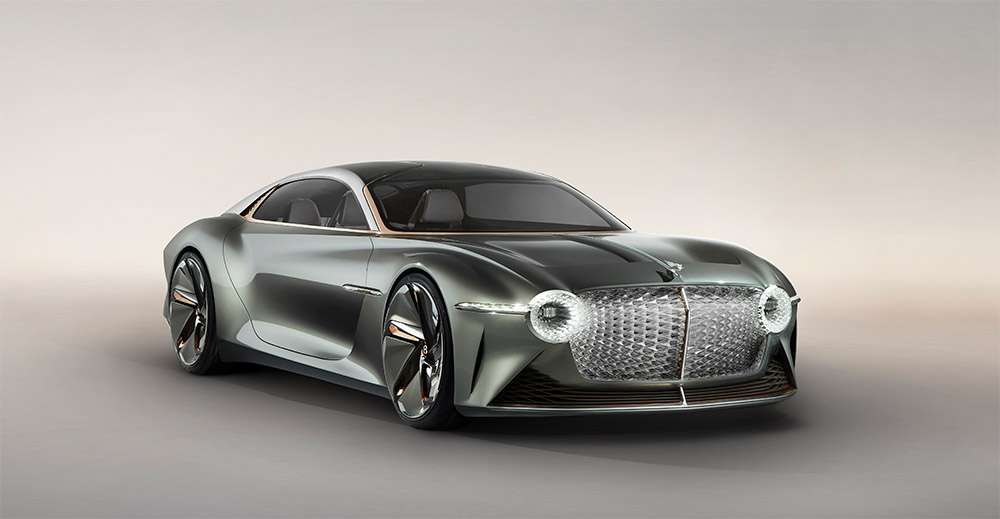 2019 was the 100th anniversary of the foundation of Bentley Motor Company. The firm from Crewe had its own share of hardships throughout one century of history. And since the arrival of the current owner VW, 2018 was its worst year, which ended up with an operating loss of €288 million, due to delayed product launch, production issues and lengthy process to certify engines for global emission standards. To come out from such a bad situation, along with other measures and while retaining all its core values of ultra-luxury and performance, Bentley focused its strategy on sustainability.

Numerous manufacturers are moving in this direction, not only because it is necessary for our environment and to comply with increasingly strict regulations, but because as of now even customers are increasingly aware of this necessity and willing to buy into the renewing automotive sector. When it comes to electric vehicles especially, younger generations of luxury car owners consider them the viable future for the industry and sometimes even the more desirable option. The graphs below show the opinions of luxury performance car owners when asked whether they thought EVs could be the future of the mass automotive market and of the luxury one. The younger age group clearly shows a higher reliance on this technology. The percentage of people believing in it decreases significantly for the luxury performance market, but it represents a consistent share nonetheless, and much higher than for the other two groups. 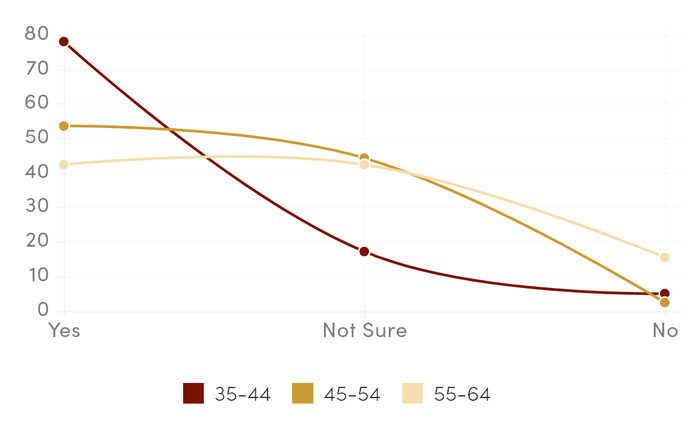 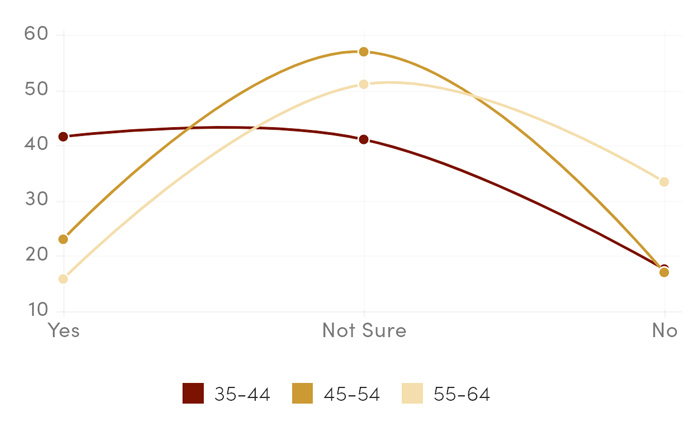 At the top of the luxury market though, so far is Bentley has embraced the sustainability challenge with a stronger commitment to tackling the issue from different perspectives.

THE PILLARS OF BENTLEY’S MARKETING

The company from Crewe started this journey even earlier though. In 2017 specifically, at the Geneva International Motor Show, when it revealed the EXP 12 Speed 6E Concept. The electric luxury convertible first showed glimpses of the company’s sustainable future in materials sourcing and was instrumental for the development of its first hybrid car presented in 2018, the Bentayga Hybrid.

Fast forward to 2019, in its centenary the major element of the marketing campaign has been an even more extreme and surprising concept car. The EXP 100 GT, Bentley’s vision for its full-electric sustainable 2035 Grand Tourer. Its success as a statement for the company has been confirmed by the ripple effect created online among reviewers and once more, at the beginning of February, by the award received from GQ as Concept Car of the Year 2020. Upon receiving the award Bentley’s CEO Adrian Hallmark said: “…The car represents every aspect of Bentley’s future, and we’re already working on introducing the design DNA, sustainable materials, and upcoming technologies showcased in EXP 100 GT into the next generation of Bentleys” (Bentley, 2020). 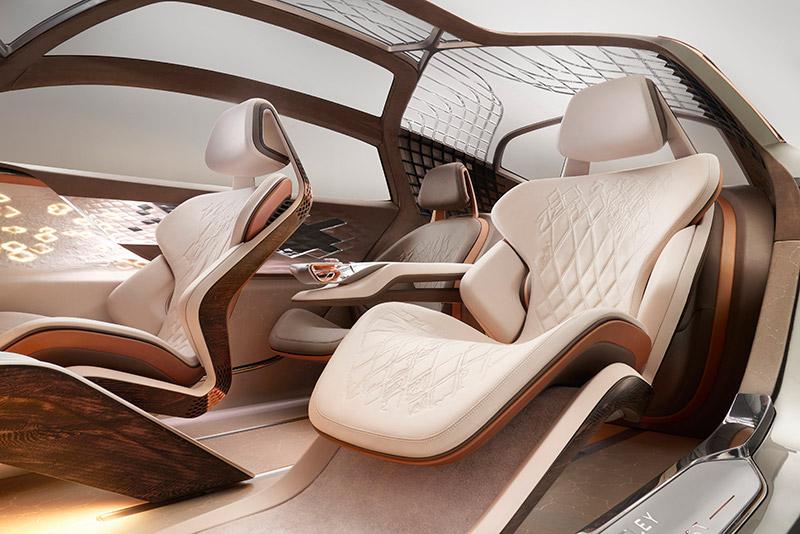 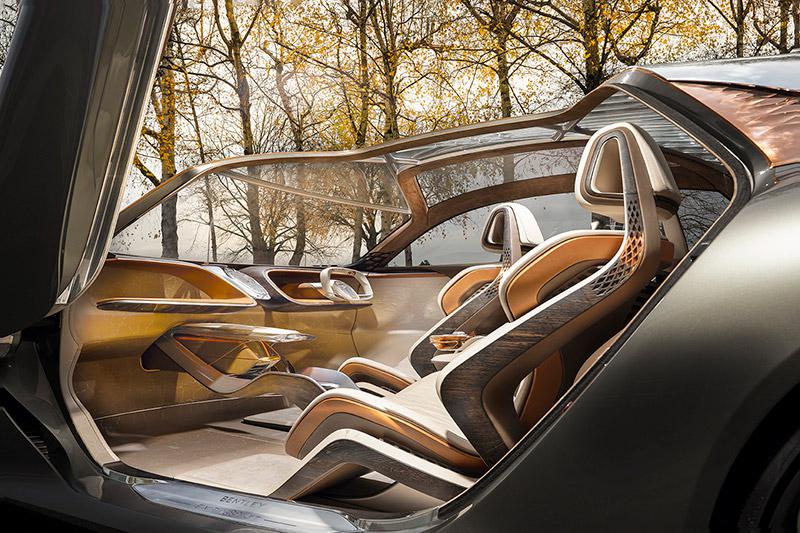 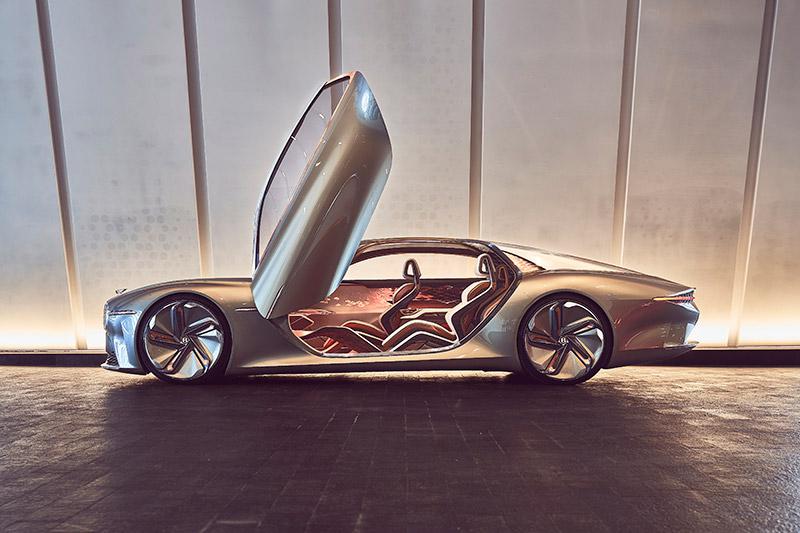 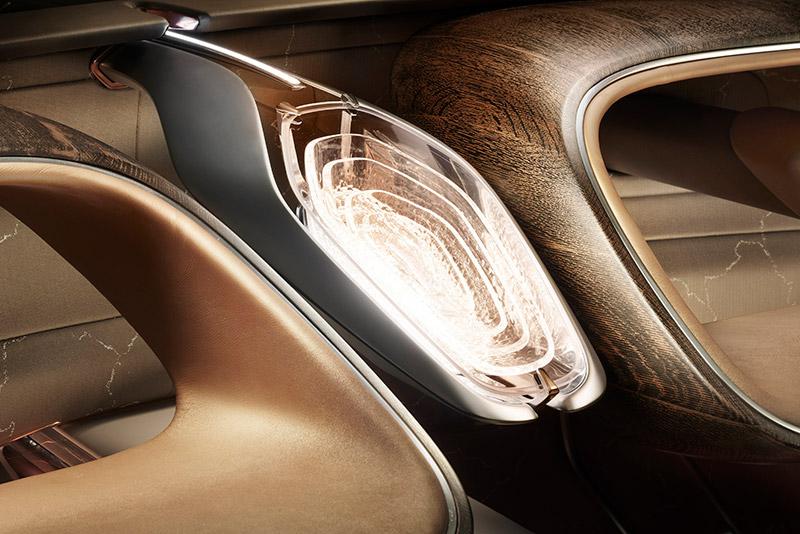 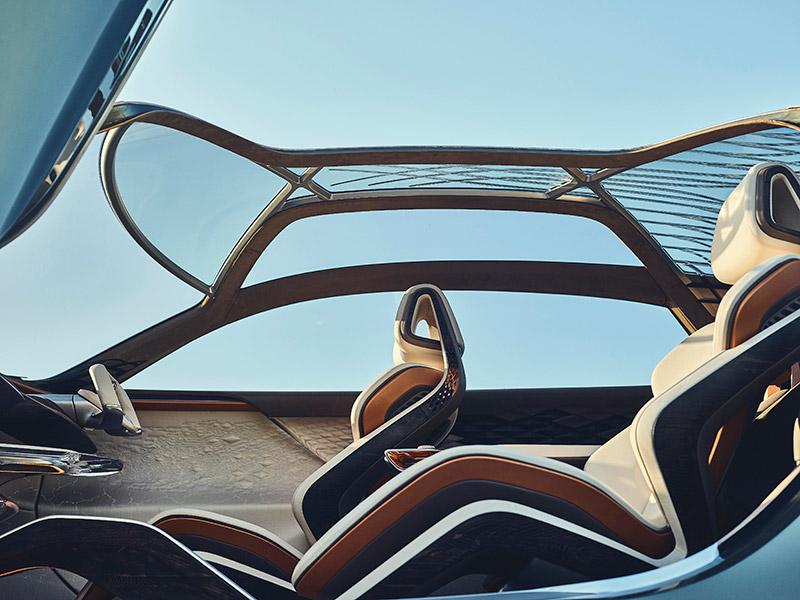 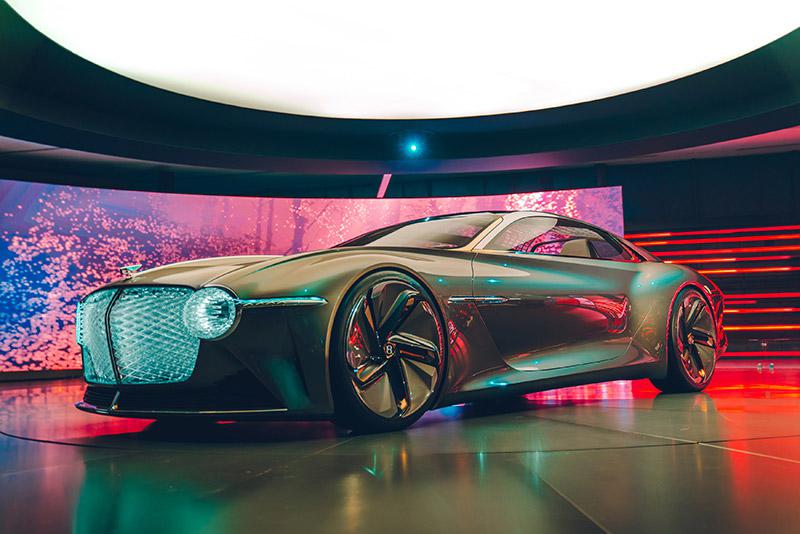 Details about its construction have been highlighted to strengthen the concept car’s proposition: “the use of 5,000-year-old copper-infused riverwood, exterior paint made from recycled rice husks, 100 per cent organic leather-like interior textiles derived from wine-making; Cumbrian crystal interfaces; British farmed wool carpets and embroidered cotton interior finishes all combined to reconnect passenger and driver to the authentic, natural world around them” (Bentley, 2020).

The second pillar of Bentley’s strategy has been the start of the Bentayga Hybrid deliveries at the beginning of October. The SUV, that as for many other OEMs in these years, has outsold any other model in the product line was rightfully the first to get a hybrid powertrain. Even though not in 2019 as Bentayga is already advanced in its product cycle while the Continental GT received its update more recently, since its launch, half of Bentley’s sales were thanks to this single SUV model, while the other half was reached by four different ones. 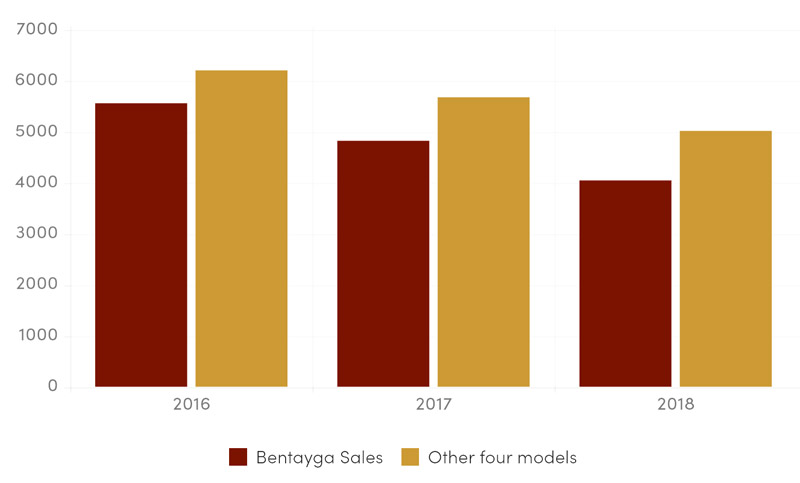 This move makes sense not only for the numbers but also considering the end-user of such model. The SUV is generally aimed at families or people who are less interested in the driving experience but, in the case of the Bentayga, much more in the luxury feeling and might be more sensitive to environmental issues (not even considering gas mileage which is arguably not an issue for someone spending over £130,000 before options on an SUV). The Bentayga hybrid has been in fact the ‘most sought-after’ since its announcement at the Geneva auto show of 2018.

Bentley’s restructuring seems to have worked well as its sales in 2019 increased by 5% and exceeded the 11,000 units.

MORE SOLUTIONS TOWARD A SUSTAINABLE FUTURE

As mentioned at the beginning, Bentley’s sustainability challenge involved different aspects of the business. It involved the powertrain evolution, realised with the Bentayga Hybrid and with the eye-catching EXP 100 GT, but also the sustainable sourcing of materials with new and innovative solutions. The other two factors that complement the former are the energy supply and headquarters’ efficiency.

For its 100th anniversary, during UK’s National Tree Week, Bentley planted 100 trees around the factory. 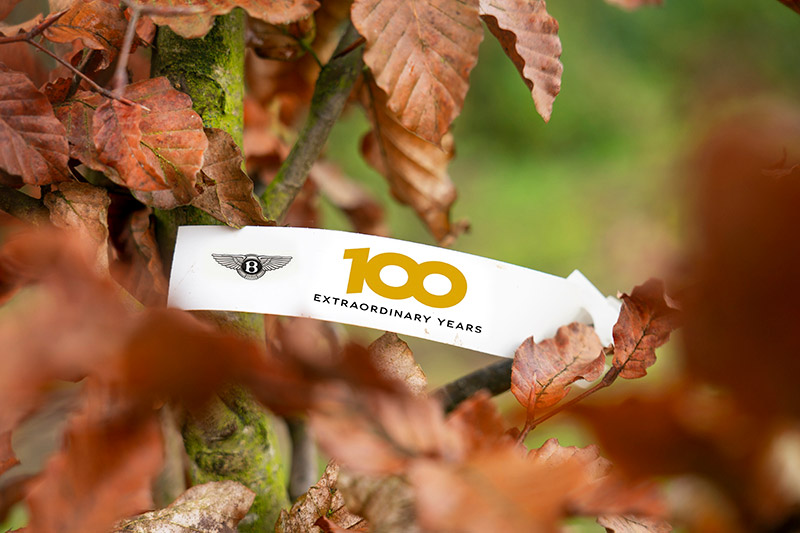 With this initiative, the manufacturer acknowledges the importance of environmental protection and reflects also how they source wood (as well as other materials) only through suppliers employing ethical practices.

While 100 trees might seem just a symbolic effort for such an important company, the sustainability journey has been developing for a while now and in various concrete ways. Through social media Bentley proudly displays how 100 per cent of the electric energy is provided by over 30,000 solar panels to the Crewe factory which is now certified carbon-free. How they halved water consumption in 6 years and committed to a zero-to-landfill policy with enhanced recycling. New policies have also drastically reduced plastic consumption among employees, improved the supply chain efficiency, and even established a site for beekeepers to house big colonies of honeybees and help biodiversity.

Bentley’s commitment to becoming the leader in sustainable practices and environmental protection within the luxury automotive sector seems to be paying off. While it was certainly not the only factor that helped the company come back from its financial distress at the end of 2018, it certainly helped to strengthen its image and show its clear vision.

This restructuring and marketing campaign are also especially beneficial in relation to Bentley’s competitors. Within the segment, only Porsche (still part of VW Group) jumped ahead of the curve with the full-electric Taycan, which is anyway aimed at a different target. The same is true for its SUVs Cayenne and Macan, which despite being in the premium segment do not reach the luxury refinement (and price) of Bentley’s. The only direct competitor, Rolls-Royce, is right now employing a different strategy, skipping the hybrid technology to move directly to full electric in the future. As of now though, it certainly looks behind or simply not as interested as Bentley is in sustainability.

However, in a time when climate change is arguably the most sensitive topic in any sector, and consumers’ awareness has never been higher, this multi-faceted strategy proves the company’s management efficiency and effectiveness in establishing its presence as one of the strongest competitors in the niche. The award-winning beautiful, elegant and sustainable EXP 100 GT tops it all and closes the circle with a sparking success.