With the holidays approaching, a lighter theme seems due. So, here is a follow-up on the 2020’s video about Christmas-related automotive social media marketing campaigns and YouTube videos.

For the second year in a row, Bentley published a Christmas video for the holiday. Last year’s one, included in the 2020’s article 5 Christmas Automotive Social Media Marketing Campaigns, showed the Bentley Mulliner division producing a tailored-made Flying Spur for Santa Claus himself. This year, there is another clever idea. When Christmas decorations go missing, Bentley apprentices come together in secret to use their skills and create unique decoration pieces from cars’ materials to save the day.

Another great idea because along with bringing a festive and light atmosphere the video displays the creative potential and craftsmanship abilities of Bentley’s staff. Skills applied for these little creations and the same that are used for each car’s component.

So far, the video has been really successful. Views are, in fact, way above those of other videos published throughout 2021 at over 800,000. Just 13 days after its publication, it is already the 5th most viewed video of Bentley’s official channel. This definitely shows once more the potential of alternative themes that even when touching the automotive topic only indirectly or through emotional connections, can become even more attractive to the target audience than the regular commercial showcasing the car or its performance.

This is the case for other brands’ similar campaigns too. Here are a few examples.

Other companies have not (or not yet) published any special video for the holidays or the end of the year. Nonetheless, the numbers shown in the graph below suggest some interesting observations. 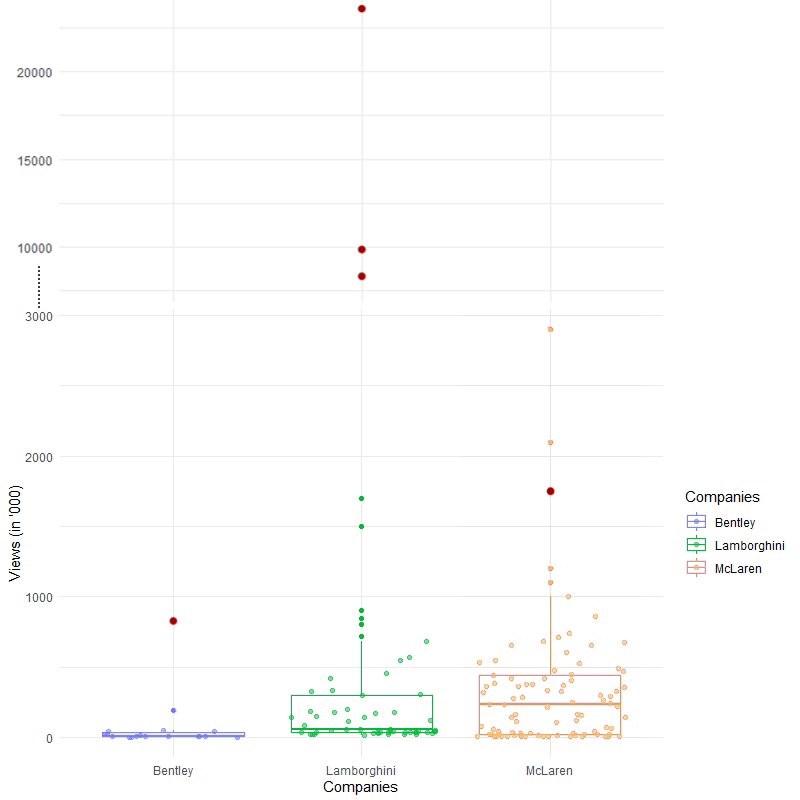 *McLaren boxplot includes both the automotive and F1 channels

Among the automotive companies in the luxury and performance segments, Bentley, Lamborghini, and McLaren are the ones that produced dedicated content for the Christmas holidays in the last few years. As visible from the graph, the dark red points correspond to the holiday videos, and here are compared to all the others published in 2021 by each company. It is not a surprise then, that in terms of views count they are always outliers in the top part of the boxplot.

In the extreme case of Lamborghini, not only all three videos are at the top, but the views exceed those of any other video on the official channel by a significant margin. The video “Lamborghini Real Lover”, at 23,6 million views is not just the most successful video published by Lamborghini, but also one of the most successful automotive marketing campaigns on YouTube overall, behind only Porsche’s “The Heist”, and Mercedes-Benz “Magic Body Control”.

Also, even though Lamborghini has the most prolific channel among the ones in the graph, considering that McLaren content is split into the automotive and the racing one, the number of videos published has no statistical relationship with the channel’s success.

This is evident by looking at the same graph for Ferrari’s channel, the most active by far, with over 1,700 videos published (while Lamborghini reaches “only” 613 and McLaren 1,091 with both channels). Here, Ferrari uploads every piece of content, from Formula 1 to the automotive business, to customer racing, and more. Views are in general much lower than those of its competitors though, and the year-end celebration video of 2020 too is just slightly above the boxplot’s third quartile. 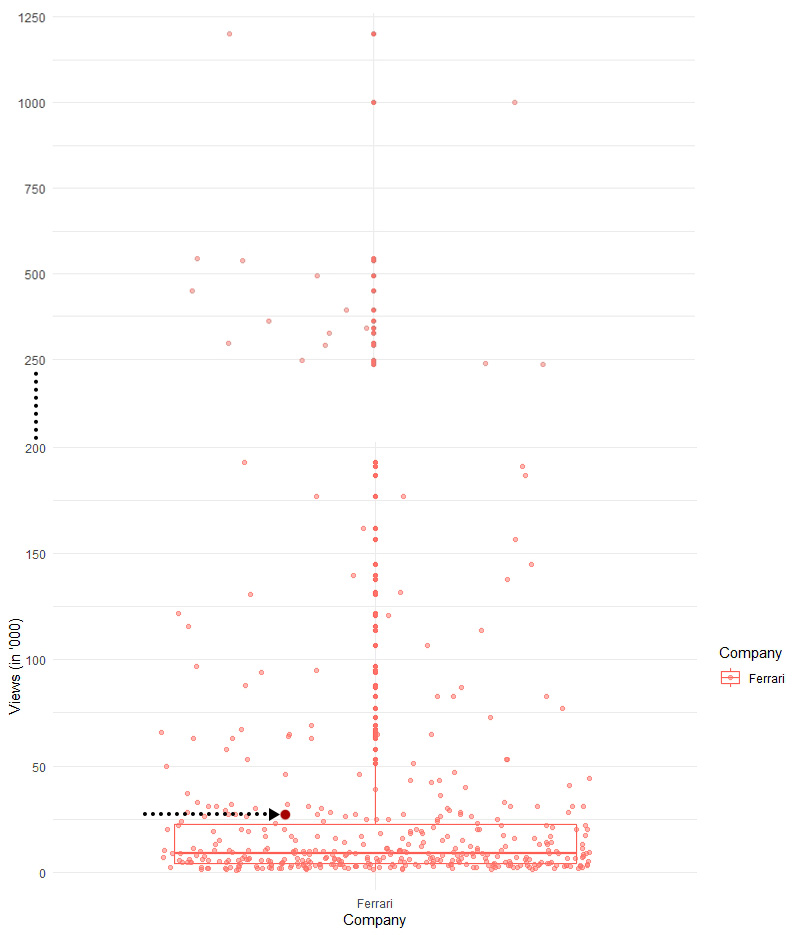 So, as reviewed in the Marketing Racing articles about Porsche’s “The Heist” and McLaren Marketing Strategy there is more involved in the success of social media campaigns.

As mentioned at the beginning of the article, not many other companies have joined Bentley so far this year. McLaren has been the only one so far through different platforms.

On both Facebook and Twitter McLaren automotive is publishing its own version of the “25 days of Christmas”, with the hashtag #25DaysofMcLaren. Each daily post features a short video with a car and some design or technical detail about it.

On YouTube, once again, McLaren went for the Formula One channel for the Christmas video. The element that has proven key to its success on social media is replicated here. The protagonists are the two current F1 drivers Lando Norris and Daniel Ricciardo, and the internet is responding, with the video reaching already over 120,000 views in just 6 hours.

The Formula One team has been the most important communication channel for the brand, ensuring the biggest following in F1 and a huge audience on every platform. Most of the views shown by the boxplot’s outliers are, in fact, from the F1 channel in the graph above.

Another mention goes to Lamborghini which, so far, did not follow up the previous years’ successes. However, it promoted a charitable initiative through LinkedIn for the International Human Solidarity Day supporting the Parents’ Association for Pediatric Hematology and Oncology. The Italian brand also teased something new coming under the hashtag #tothemoon, which will most likely be an NFT-related initiative that could end up referencing the holiday period. This would make Lamborghini the second automaker to enter this new space after Alpine sold the A110 GTA Concept as a Non Fungible Token.

Last but not least, BMW published its own Christmas video. A fun short film in which even actor Christoph Waltz is involved. This one too in just four days has received a lot of visibility reaching over 7 million views.

Edit: Lamborghini too on the 23rd released its usual Christmas Celebration video called "Lamborghini Christmas Gift 2021". With the same narrative of previous videos, Lamborghini shows the true emotions of driving in a Lamborghini.

This year Bentley has got the right formula for Christmas. And as the numbers show these activities can definitely pay off in terms of exposure. We might still see some new interesting campaigns in time for Christmas or New Year’s Eve 2021, in the meantime, I wish everyone a Merry Christmas!