During the Cannes Lions Awards that are being held between the 21st and the 25th of June, on the festival’s website has been published a panel discussion about a very interesting partnership started last year between McLaren, Coca-Cola, and Amazon.

The first two have been partners since 2018 when for the first time in history the Coca-Cola logo appeared on a Formula 1 car. On this occasion, however, the project involved also a second American giant: Amazon. This resulted in ‘Driven to Deliver’, an entertaining video featuring the two McLaren F1 Team drivers Lando Norris and Carlos Sainz (who has since moved to Ferrari) driving around in a Coca-cola-branded 600LT and delivering Amazon parcels and Coca-Cola Zero bottles to people. 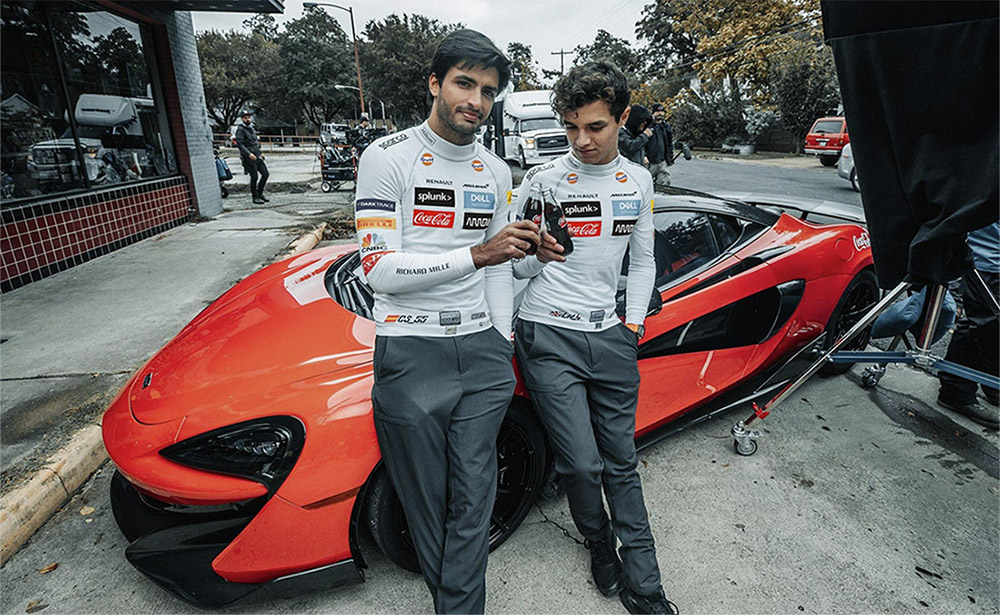 *Carlos Sainz and Lando Norris on the set of Drive to Deliver. Photo by Amazon

The interesting discussion went through the details of the collaboration and how it came to be.

HOW THE PARTNERSHIP STARTED

The first concept highlighted is the importance of the collaborative effort put in by each company and how, in marketing, the best projects are almost always the result of such cooperation. The panelists then proceed by introducing the different factors that played a role in the realization of this project.

Brand alignment was the first. Two companies must share similar values at least partially to begin a constructive conversation.

Other factors for success in this collaboration were: 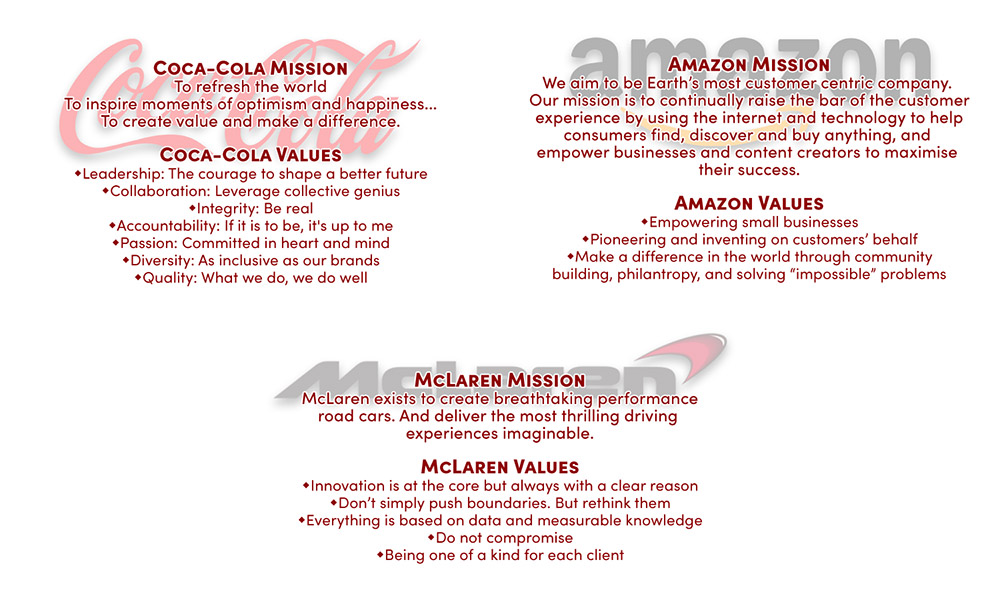 In the case of these three companies, there are several overlapping values such as the ones advocating for leadership in their respective sectors, innovation, and quality. Most of all, however, is the focus on customer-centricity. Even if applied in different ways, the driving force that shapes each business is to deliver the best product and service possible to the respective customers.

Relative to the results of this campaign started with the video, McLaren’s Marketing Director Cronin said:

“When we drew it out we wanted something that people would remember […] and how do you have that authentic experience? [...] I think the biggest reward here is leveraging the two drivers and having them in the car together […] you were able to see really the true characters of both drivers…”

And this is arguably the most important factor that not only brought even more attention to the campaign thanks to b-roll and ‘memes’ shared by the drivers on social media but also helped giving it visibility for a long time.

And this is something that the team at McLaren has already understood and is doing better than anyone else.

The genuine approach employed in ‘Driven to Deliver’ showing the true interactions between the drivers, which resulted in some really entertaining comedy, has been used for a while now by the racing division. McLaren like other manufacturers (not just those in F1) keeps two separate channels for the automotive and racing divisions. The two overlap on more than one occasion anyway. 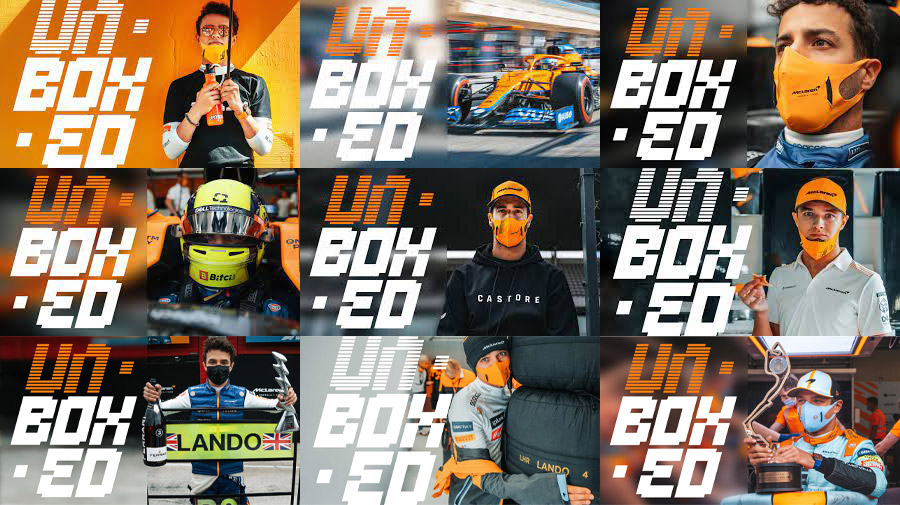 The brand is really leveraging effectively its rare advantage of being both a luxury automaker and a Formula 1 team. Two years ago they created the successful series called ‘McLaren Unboxed’. A series of short ‘documentaries’ bringing the audience straight into the life in the Formula 1 paddock during each race of the calendar. These give an unfiltered (most likely not 100%, but at least for the most part) look into the life of the drivers, but also the rest of the team during the whole race weekend. This is a very genuine and unique insight into the sport, offering a new perspective and countless details that the general public and enthusiasts would never discover otherwise. And this innovative approach is rewarding McLaren which as of now is by far the most followed channel of any Formula 1 team on the grid.

Part of the initial success was surely due to the strong personality of the two drivers and the chemistry between them. It helped to bring visibility to these pieces of content. However this is definitely not the main reason now, as the drivers’ line-up changed in 2021 with Ricciardo replacing Sainz, but the popularity of the show did not.

With Unboxed, McLaren found the perfect formula, which is evident by looking at the difference in engagement that the other teams (even the big ones) get in comparison. 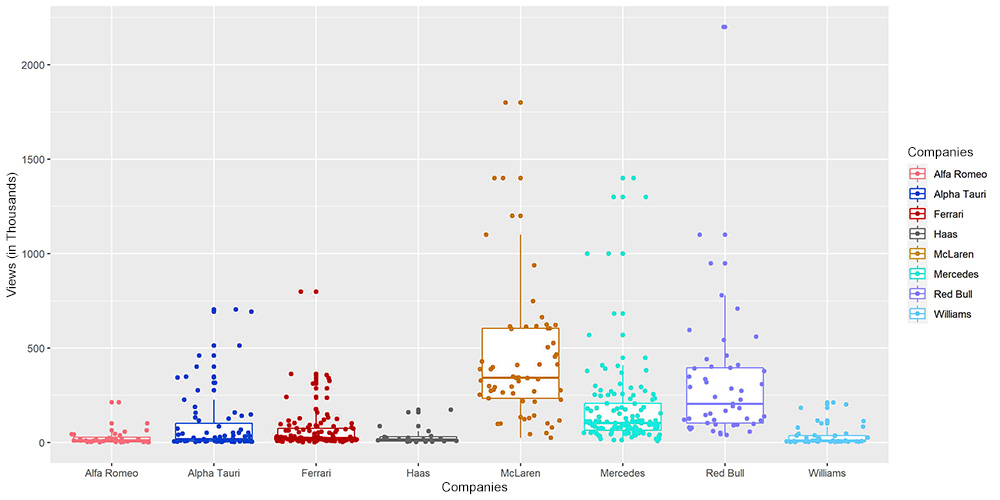 *Ferrari has a single channel for its automotive business and racing division, so only data relative to Formula 1 content has been included. Also, a single video by Mercedes with a total of almost 4 million views is not included as it would impact the graph clarity
**Alpine and Aston Martin channels are not included as they are new in season 2021 so only have a few months’ worth of content

Then, of course, the social media effect must be taken into account. Much like it happened for ‘Driven to Deliver’, the content published by the company is complemented by that published regularly by the team members and drivers. This creates a perfect synergy as well as an almost constant flow of material for the audience to enjoy and engage.

In this synergy, an important part is played by Formula 1 itself. Thanks to an effective social media strategy, with varied and engaging content on every platform, Formula 1 has experienced significant growth in the last few years. In 2020, also due to the difficult situation, the world went through, and people being forced to stay home, the sport registered a staggering 99% increase in social media engagement, more than any other major sports league.

Every company in automotive and even more in motorsport is going through a gradual transition, adapting its content to the expectations of a modern audience that wants to engage with the real people behind a brand or a team. McLaren's communication and marketing have gained a strong momentum thanks to a bold and innovative idea. Many, on the other hand, still fail to achieve similar levels of success as they deliver content that does involve the people within a brand but often feels too artificial.

In the words of McLaren’s Claire Cronin:

And McLaren is indeed the perfect example of how to develop a genuine communication with fans and customers.