The Future of Motorsports through Social Media

Rising numbers of young fans are sparking a Motorsport renaissance through social media. How does it happen? And can this wave favour car manufacturers?

Formula 1, referred to by many as the pinnacle of motorsport, in 2018 registered its second year in a row of audience increase and it has been the pinnacle of this new popularity surge.

With an increase year-over-year of 10%, it reached 490.2 million unique viewers. The top 20 countries by the audience even registered an average of +14%.

As in many other sectors, emerging markets in Asia accounted for a large share of such increase. India +87%, and China that tripled its audience since 2017 reached 68 million viewers becoming the second largest market for this sport after Brazil that counted 115.2 million. The total TV audience increased as well reaching 1.758 billion.

In 2018, across 'Western' social media (thus excluding Asian popular platforms such as WeChat and Weibo) its followers totalled 18.5 million. An astonishing +53.7% compared to the previous year that made Formula 1 the fastest-growing sport-related social media channel.

What started this change? The main input has come from Liberty Media. The American media company that at the beginning of 2017 finalised the acquisition of Formula 1 Group and the commercial rights of its Championship for US$4.4 billion.

Entrepreneur Chase Carey, who replaced Bernie Ecclestone as CEO of the Formula 1 Group, is applying a long-term plan and focusing on avoiding narrow-framing strategies that according to him were employed so far by the F1 management. There are several ways in which the new executive is trying to reignite the passion for this sport such as race calendar extensions and new regulations. One of the major efforts though is through the heavy employment of social media platforms. 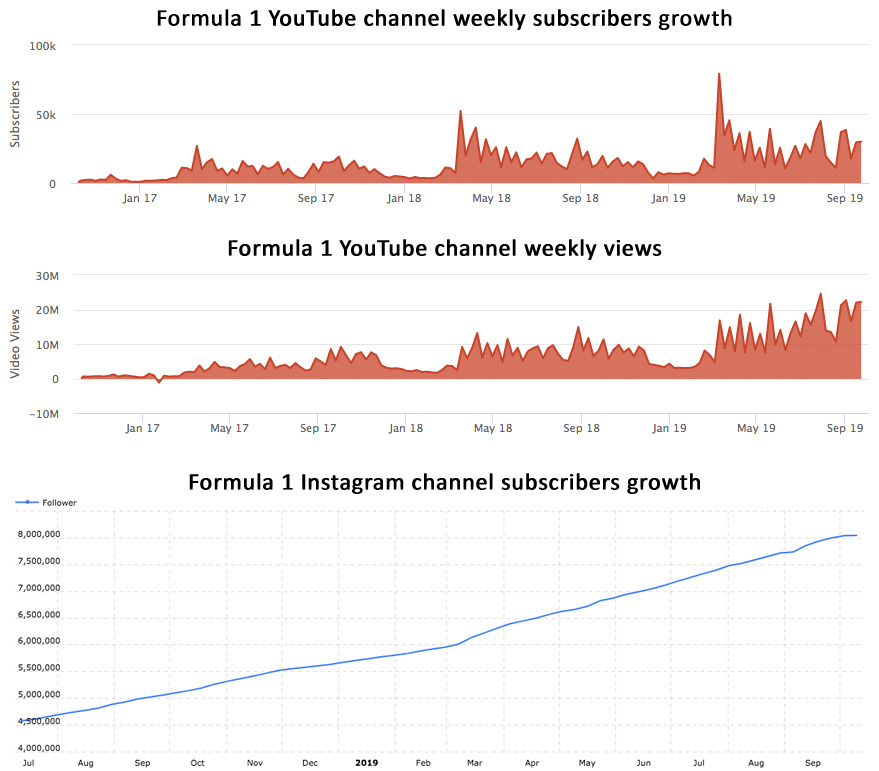 The significant engagement and following increase evident from the two graphs above reflect such focus. YouTube and Instagram, second and fourth among the most used social media platforms in the world have an audience of over 2 billion and 1.2 billion people each. They are also the ones with the youngest and fastest-growing audience.

Carey himself in an interview for Financial Times exemplifies the rationale behind this new direction by highlighting how the internet offered the opportunity to create the "Shared Vision" for all the Formula 1 stakeholders. A vision in which teams, drivers, and especially the audience interact with each other is evolving every day and it represents the strength that no other communication means had before.

The opportunity to participate and have a real impact on the content produced instead of being a passive spectator is what is making all the difference, and these resources are being used impeccably. Not only to produce content but for engagement too. Publishing original videos and photos along with a mix of materials quoted from drivers and teams create that unique 'Shared Vision'. 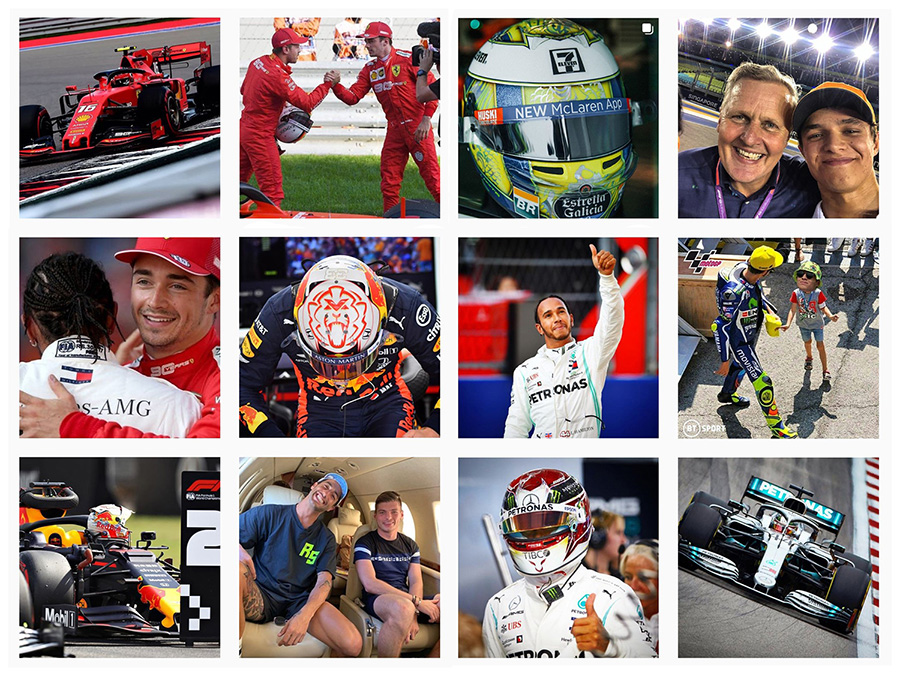 Partnerships like the one with Netflix for the show “Drive to Survive” contributed as well to show the ‘more human’ side of the sport and enjoyed a good reception by its viewers.

The increasing importance of E-sports is also consistent with this vision, and the only way for everyone to participate in a sport that has prohibitive costs for the average F1 fan/enthusiast. It is particularly relevant also because it attracts almost exclusively a very young audience composed by Generation Zs. 5.5 million viewers, with around 80 percent of under 34, while for the actual sport the average is 40 years old. Such is its importance that for the 2019 season, every Formula 1 team in the Championship will have its own E-sport team representing it in the official competition.

The second crucial aspect of this communication evolution is live content. With such a massive continuous stream of uploads, trends become obsolete very quickly and this adds value to the live experience and its immediate fruition.

The priority then is to attract a new and young audience and F1 management thinks that “unique event content will continue to appreciate in value”.

Automakers involved in the Championship such as Alfa Romeo, Aston Martin (even if only through a partnership), Ferrari, McLaren, Mercedes, Renault, as well as OEMs like Pirelli and Honda are benefited indirectly as well by Formula 1’s popularity increase.

Audience data from the Formula 1 YouTube channel show a significant positive correlation with that of major luxury performance car manufacturers involved in the Championship. The graphs below display a regression of views data from the channels of two major manufacturers historically involved in the F1 Championship: Ferrari and McLaren. While the relation is evident for the views count, the result is not statistically significant for the channel subscriptions which may involve a stronger component of personal preference. Arguably, the synergy created by each member’s activity is beneficial for all the parties involved and worth the continued effort. 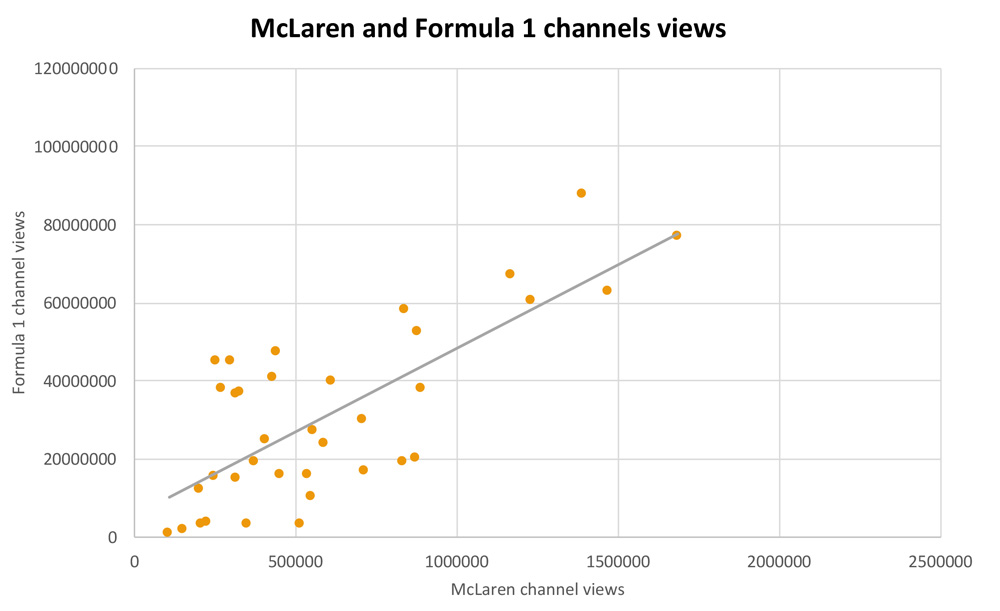 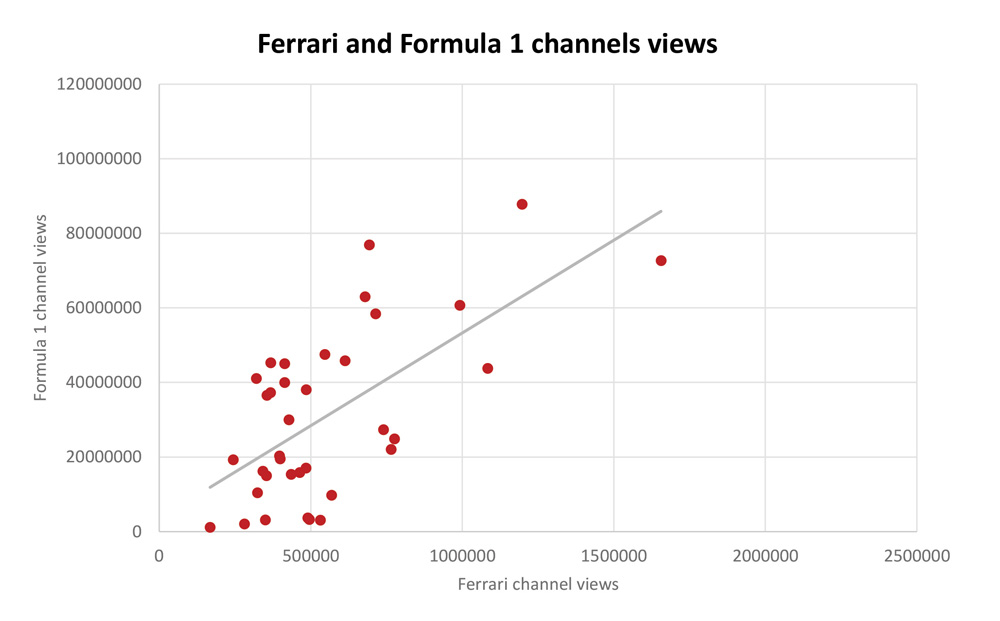 Formula 1 is the brightest example of this new business model in motorsport, but not the only one. Several other series such as MotoGP, FIA World Rally Championship, Indycar and FIA World Endurance Championship are applying the same kind of strategy with relevant results.

Social media looks very much like the most important tool to encourage the growth of motorsports that have been lacking audience traction in this decade. The upsurge is taking shape through synergies between individuals, automakers, OEMs, and institutions which with a varied mix of contents like videos, lives and online sports create the ecosystem that is so necessary to attract Millennials and Generation Zs today.