The global automotive industry is still going through a difficult period, with sales in the first quarter of 2022 shrinking in each continent. With negative effects stemming from Covid-19 cases still present despite the general media indifference of the last few weeks, supply shortage, especially with semiconductors, and uncertainties with the Russia-Ukraine war, the outlook is still worrying.

March 2022 saw sales in both the US and EU drop by over 20%. Q1 decrease was less severe overall but still reached a significant -10% in both markets (Nasdaq, Statista, Unrae). Asia might partially be an exception. While Reuters reports a 14% drop in sales in Japan in January, according to CAAM, instead, China maintains the positive momentum with a 10% growth in March, and an 8% overall in Q1. Notable is also the sales of NEV doubling in March with around half a million units sold. 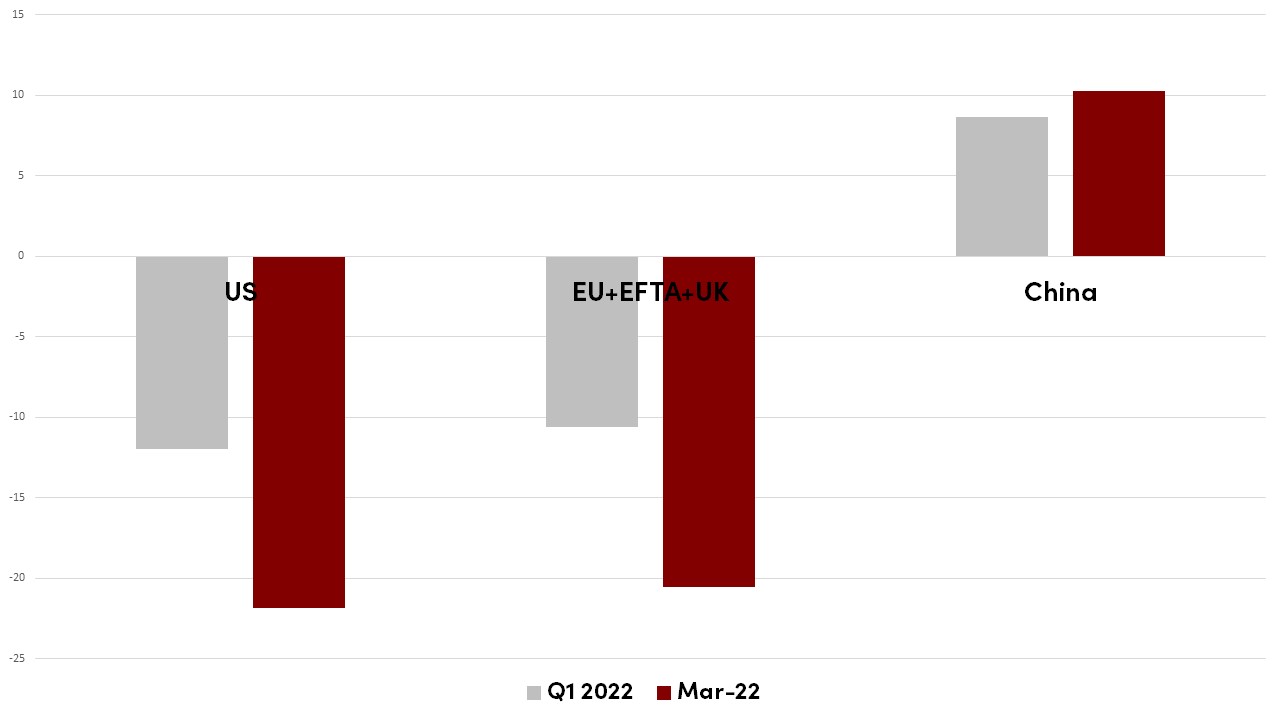 This again shows the difference between the volume market compared to the high-end luxury one where. As discussed before, and while for some the hardship is not over yet, for “the usual winners” it all seems smooth sailing and more.

The usual 5, Rolls-Royce, Ferrari, Lamborghini, Bentley, and Porsche, manage again to post yet another record quarter or a really strong one at least. In terms of sales, Rolls-Royce and Ferrari top the chart, increasing their respective sales both by 17% and reporting strong financial results as well.

Right after Lamborghini increases its sales by 4.8% and reports positive financial results as well with revenues and operating profits improving by 13 and 25%.

Porsche and Bentley both reported a sales drop of 4.9 and 4.6% but record financial figures signalling an important focus on business efficiency during this uncertain time. Revenues and operating profit at Bentley improved by 41 and a staggering 162%. At Porsche, the same figures grew by 4.1 and 17.4%. 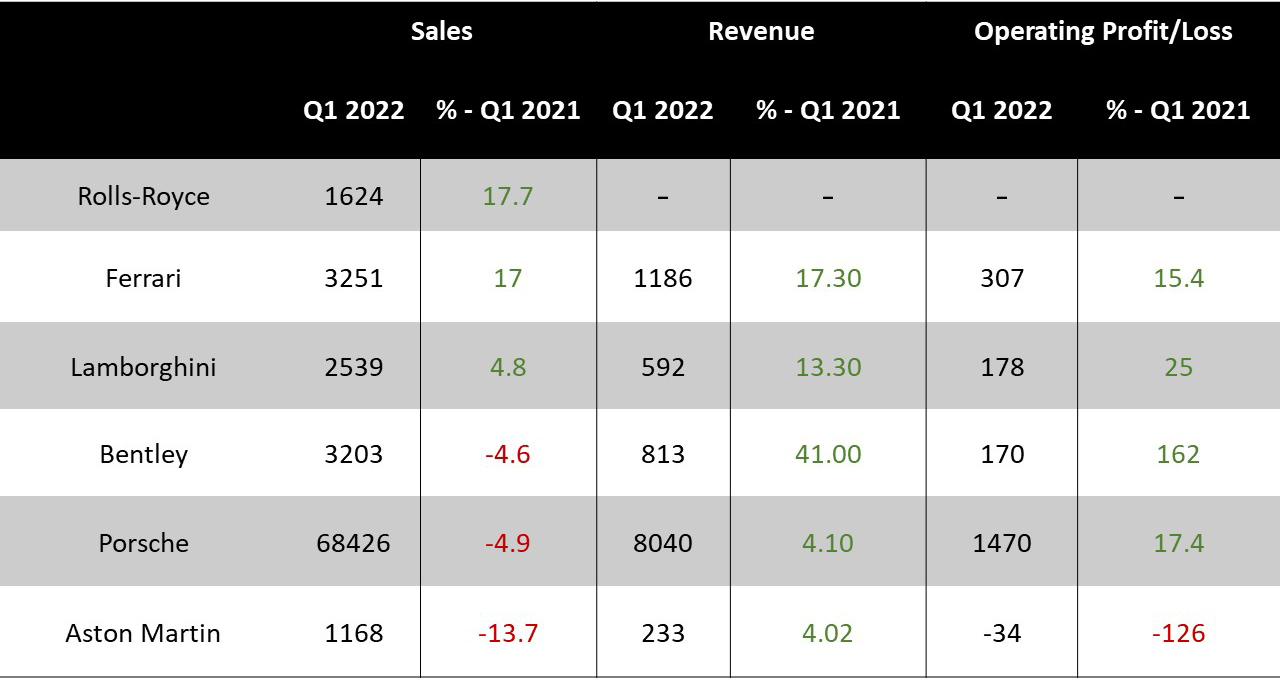 After a positive 2021, with a bold recovery from the previous year, thanks to the introduction of the SUV DBX, Aston Martin seems to be back in troubled waters. Sales decreased by almost 14% with only the GT segment improving, and the DBX sales dropping 41%. Also, despite the revenues increase, financial results are not positive as well.

The continued growth of the segment is probably coming from increasing property prices and the stock market growth of 2020 and 2021. According to property consultants, Knight Frank these unique conditions created over 51,000 new Ultra-high-net-worth individuals (UHNWI), classified as people with at least $30 million of investable capital, bringing the overall number to 610,569.

Top automakers are responding by following the current trend in the industry and expanding their portfolio to cover the widest portion of the market possible.

The one that paved the way over the last two decades and is still pursuing such a strategy is Porsche. Q1 of 2022 confirms the Taycan range as the third best-selling after the two SUVs, but above the 911, which is a key indicator of how more and more people are interested in the sporty luxury automotive experience (and in this case even electric mobility) without being “limited” by the typical sports car’s lack of practicality and everyday usability.

Notably, Ferrari has been doing the same. If it does maintain the growth rate by the end of the year, while still strictly controlling its sales numbers, it will have almost doubled the figure in 9 years, from the 7,000 units of 2013. 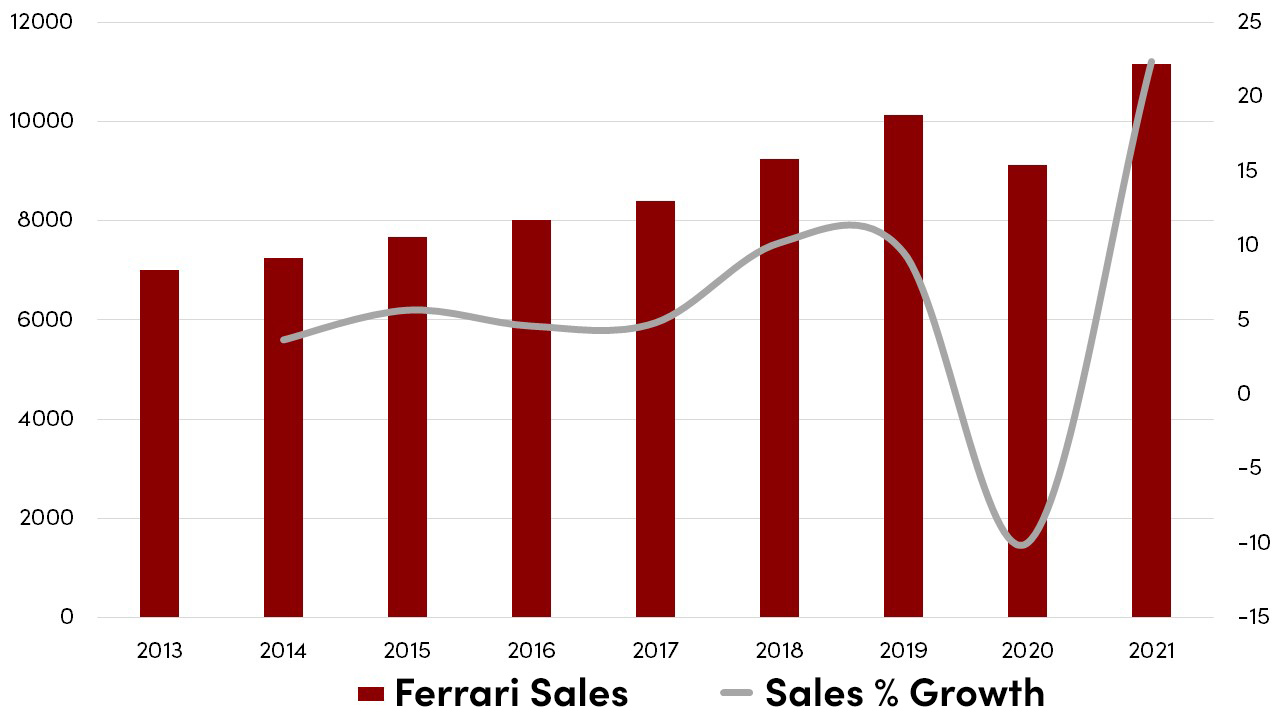 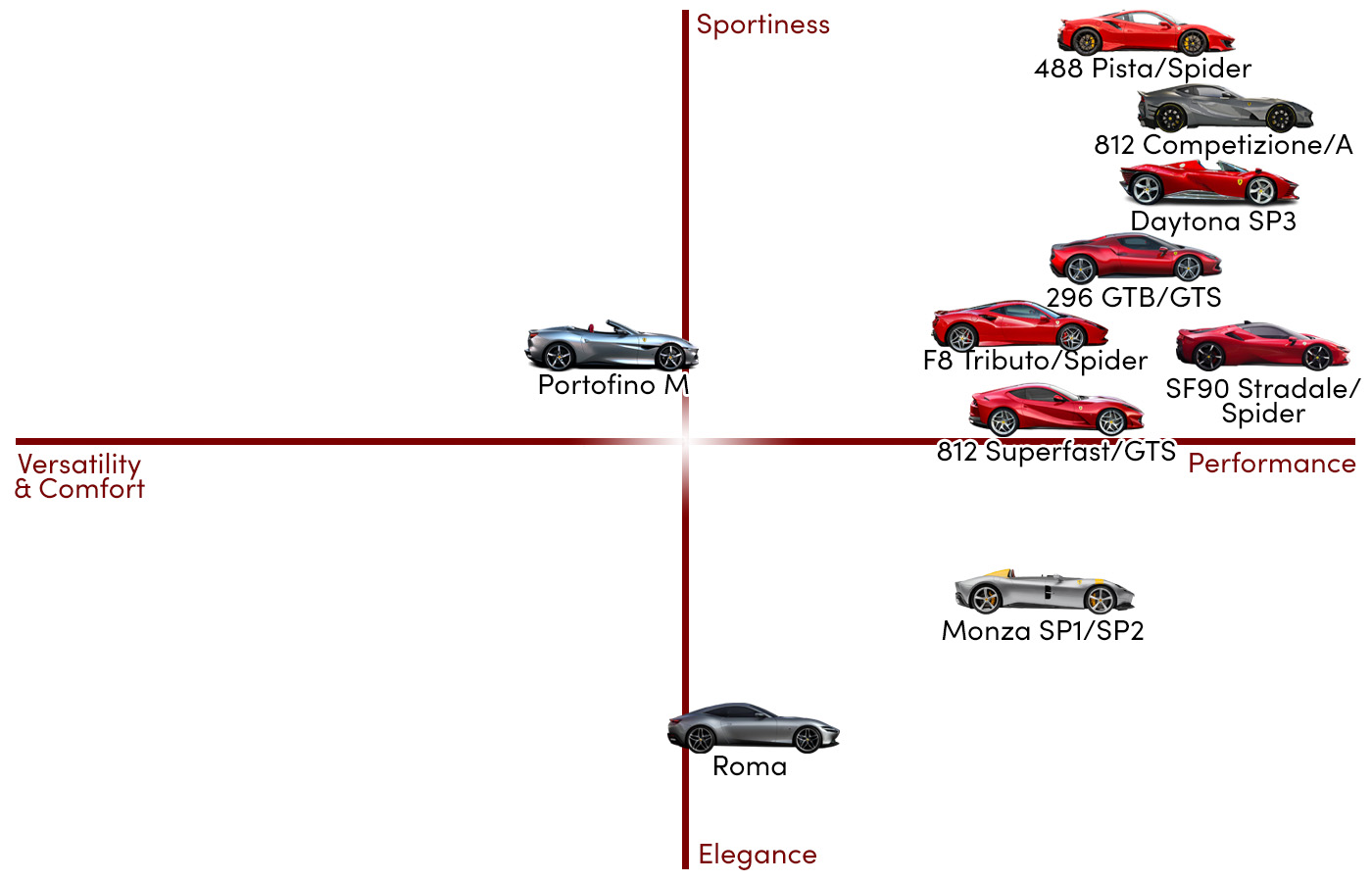 More important than that though, is the portfolio expansion. Since 2013, right after the LaFerrari, the brand added a 4-door line (FF, GTC4 Lusso), that will now be substituted with the SUV Purosangue, a new GT line (Roma), a higher-end, high-performance hybrid (SF90 Stradale). Most recently the new V6 Hybrid, that while dictated, as a choice, by the more restrictive environmental regulations, does not substitute the mid-engine V8 line (at least not yet).

Along with all this Ferrari makes sure to retain also the very top niche of its clientele with the personalisation program and the One-off, discussed more in detail as a trend here. Its latest born the SP48 Unica introduced just a few days ago.

The other brands Rolls-Royce, Lamborghini, and Bentley, as discussed have all very successfully entered the SUV segment, but that is not all. Much like Ferrari and Porsche, they too are nearing the release of additional models that will expand their lineup. For Lamborghini, it will be the full-electric fourth model, which according to what has been said by some representatives it could be more of a GT model. Rolls-Royce too has the full-electric Spectre coming soon. And last but not least, Bentley’s new model which debuts today will sit at the top of the range, expanding the brand’s reach, but not introducing a new electric powertrain.

Other OEMs that are going through difficulties or “losers” (in a figurative way regarding this last period, of course) are adopting similar strategies. But there is more going on behind the scenes for both McLaren and Aston Martin in the search for stability.

McLaren, whose market potential was investigated in the last article’s 5 forces analysis, unexpectedly has not released any report after Q3 of 2021. Its range expansion has consisted so far in the addition of the GT to the range. More importantly, however, there is also an important restructuring.

It is of last week the announcement of the new CEO finally taking place at the head of the British company after Mike Flewitt left its role. Michael Leiters will start in his new position effectively on July 1st. Before this, he held senior positions at Porsche and has been CTO at Ferrari. This important announcement followed some other major changes in important corporate roles within the company.

There is also the now long-standing rumour about the Audi buyout of McLaren’s F1 team that would at one point involve also the automotive division. The deal was first denied by McLaren in November, but speculations continued as ongoing discussions were not excluded. Despite various media outlets still talking about it, from recent statements by the likes of Zack Brown, it looks like nothing is going to happen (at least in the short term).

Similarly, it is of a few days ago the announcement of Aston Martin’s change of leadership. After just two years, Tobias Moers, the man behind the rise to power of AMG, called by Lawrence Stroll to save the British car manufacturer, will be substituted. While Moers will remain close to the top management of the firm, the role of CEO will go to ex-Ferrari Amedeo Felisa who held the same role in Maranello from 2008 to 2016. With him, another former Ferrari executive, who worked at Alfa Romeo and BMW, Roberto Fedeli will join Aston Martin as the new CTO. Both of them arrive from Chinese Silk-FAW which is attempting to establish a presence in the Italian motor valley to produce electric performance cars.

Aston Martin too has a significant product expansion planned, but its recent difficulties have left it behind the competition. Especially in the transition to hybridisation and electrification. The mid-engines Valkyrie and Valhalla have already been significantly delayed. In an interview with the Guardian, Stroll himself said that Moers’s contribution was key to restructuring the company in a critical moment. Now, someone else is needed to bring it to the next stage. While all the people involved are certainly capable, and extremely experienced professionals, only time will tell if these fast changes in management will have the positive effect Mr. Stroll is hoping for. Aston Martin went through the rough destocking phase, and out of it had a good 2021. The financial risks however are not over, and this first quarter does not look promising.

Between restructuring and vast portfolio expansions, the luxury segment continues its overall growth while the rest of the industry falters. Despite the global increase of HNWIs, one wonders if all the contributing factors that caused such a severe contraction of the automotive sector in 2022 will eventually affect the luxury segment as well. For now, a few companies are setting the trend and look very much in control of the narrative and the direction of the market.