Big Projects hint at Aston Martin and Porsche’s near future

Two big announcements were made by Aston Martin and Porsche just a couple of days ago. This time, however, they are not regarding new cars, but two big projects for new facilities that suggest plans for the two companies’ future.

As of H1 2021, Aston Martin starts to look like it might be seeing the light at the end of the tunnel. As planned, most of it is thanks to the latest luxury SUV DBX. As reported previously in ‘Aston Martin Restructuring: A year Later’, DBX had already shown promising signals in Q4 of 2020. Despite the overall industry slowdown it reached 1,171 units sold in the last quarter.

AUTOMAKERS H1 2021 SUV SALES AS A PERCENTAGE OF THE TOTAL 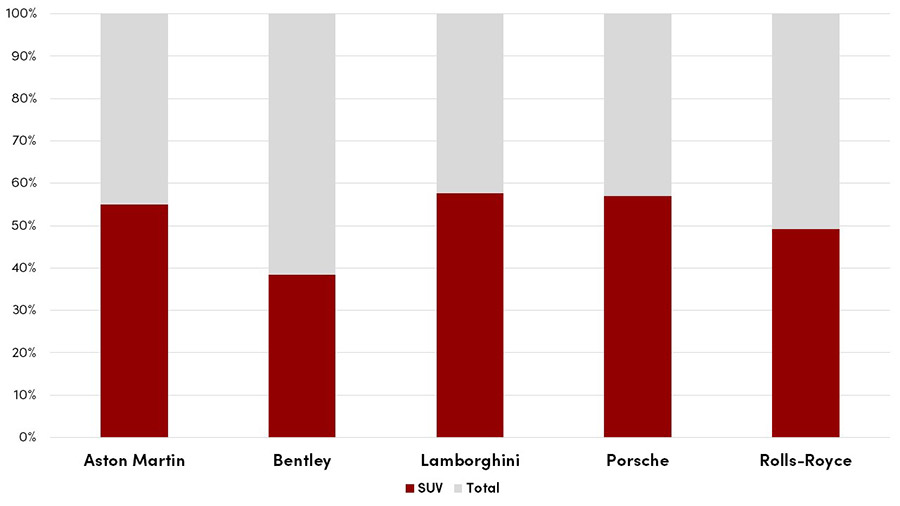 *Rolls-Royce data for 2021 is not available so 2019, closer to the current condition is used, as sales of 2020 were impacted by the pandemic.

Although the situation has improved since 2019, there is still doubt regarding the long-term success of the current line-up. By looking at the quarterly results over the past few years (excluding 2020 as it might misrepresent OEMs’ sales trend due to the pandemic impact), Aston Martin’s sales, like those of other British automakers starting slow at the beginning of the year, increase significantly by the last quarter (often the reason is a new model’s release).

This seems to go differently for other companies where Q2 often seems the strongest. If that was the case for Aston Martin, the outlook would be even worse considering the current results.

DBX’s sales in Q4 of 2020, while significant relative to the company overall sales, were much lower than its competitors’. The last quarter was arguably still affected by the economic slowdown caused by Covid-19, but other companies by that period had already fully recovered previous volumes. Also, Aston Martin’s SUV sales in the first two quarters of 2021 respect the trend reflected in the graph, as they have been both lower than the last one of 2020.

Naturally, when it comes to DBX’s success the stakes are very high. If they do not keep increasing over 2021, this could turn into a serious issue, as it sold a lot less than its competitors in 2021 as well. Right now this could be due to several factors, production constraints in the new factory. On the customer side, the brand has surely suffered some hits due to the less varied and ageing product line-up, as both the mid-engine models Valkyrie and Valhalla have been delayed.

The rest of the year will be an important indication of the brand’s condition and new models reception. And it is exactly for the company’s branding that this week’s announcement is extremely relevant.

Through a video, CEO Lawrence Stroll presented the new project for a state-of-the-art new Factory and Windtunnel dedicated to the Formula 1 development.

The first half of the season has not been the easiest. Even with some good results, Aston Martin, right now ranked 7th in the championship, can fight for the 5th spot, or, more realistically for the 6th. In terms of earnings at the end of the season, apart from the fixed income (set at $36 million for each team in previous years), a second income stream under the current regulations could vary between 10.4 and 8.7% of the amount dedicated to the second payment to F1 teams. Significantly far from last year’s fight for the 4th place with a close fight for the 3rd. 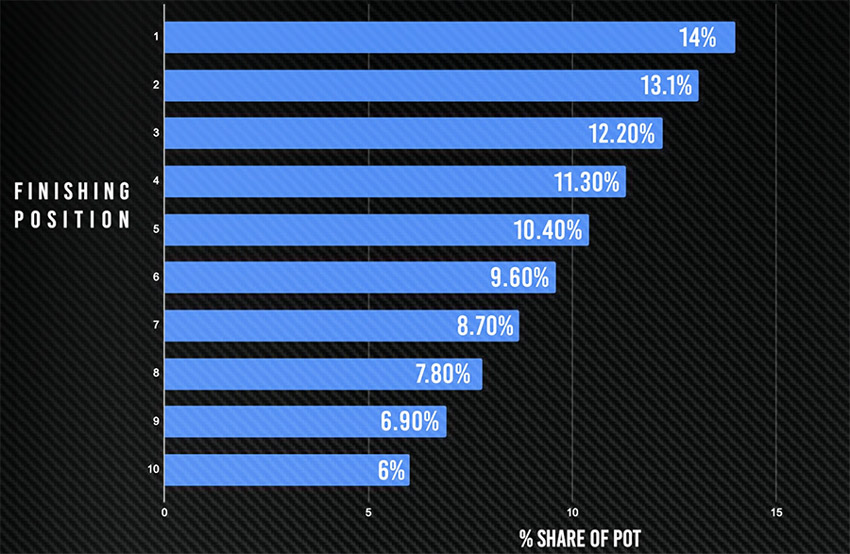 In 18 months Aston Martin Cognizant F1 Team will have a new 37,000 m2 headquarter matching its ambition of expansion and success in the following seasons. Three units will compose the complex, with one housing the design, manufacturing, and marketing departments, a second the wind tunnel, and the third will be a development of the current facility adding amenities for staff and a logistics centre.

Most importantly, however, this decision is important for the landscape of Formula 1 and for the company itself. Where the previous team owned by Lawrence Stroll was mostly considered a mid-field one, this kind of investment indicates the importance of the F1 campaign for Aston Martin.

Several automakers have been involved throughout the years. Sometimes for short periods of time. Aston Martin is clearly aiming at a long-term plan. This plan and its success in the future are what could vastly change the face, and reputation of the company in the coming years, much like the long stream of successes is benefitting Mercedes. Additionally, there is of course the innovation factor that would allow Aston Martin to transfer new racing technology to the automotive business, like other OEMs such as Ferrari or McLaren have been doing for years now.

Porsche comes from a much more favourable situation. In the first half of 2021 it recorded a 31.4% growth in sales. Up to 153,656 units, even though 2020, all things considered, was not as negative as for other companies in the same segment with just a 2,8% sales decrease, and positive financial figures as well.

Also, Porsche, ahead of its competition, shifted earlier to full-electric cars production with the Taycan, which in its first full year has been a significant commercial success.

The only two that declined were Macan and Panamera. The first one was probably due to the advanced product lifecycle (Macan received an update at the end of 2018, but also a facelift for 2021), and its pricing, placing it in a segment that was affected more by the pandemic. On the other hand, Panamera sales are more likely to have been partially cannibalised by the electric Taycan itself, which is priced in a very similar way at the different trim levels and boasts analogous selling points, such as the luxurious, but sporty and engaging driving experience, paired with the practicality of an every-day car.

2021 should clarify even further if this trend is developing in favour of the electric models. This year, in fact, Porsche followed the success of the electric GT with a lifted shooting brake version called Cross Turismo, which is even closer to the offering made by Panamera.

Overall, however, Porsche has had an encouraging and predictable success with its endeavour in the electric space. And it is here that comes its announcement.

The automaker announced the start of the development of a synthetic fuels production plant in Chile with partners Exxon and Siemens Energy. This follows the announcement, made a few months back, of a large investment for the research in this field that should ensure the survival of the ICE at least for the foreseeable future.

If interested in going more in-depth in the topic make sure to check Porsche’s bet on Automotive Future: Synthetic Fuels Explained. 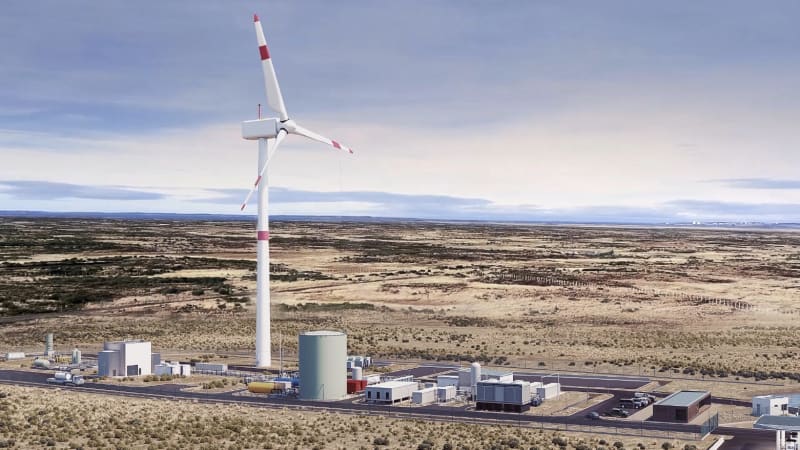 So far, in fact, it seemed like Porsche would gradually shift toward electrification with all its product lines, except for its racing cars, classic cars, and the 911 line. This is mainly for two reasons. First, is the current limitation of the electric powertrain, especially regarding the weight and different driving characteristics. Second, to avoid alienating the loyal customer base of 911 passionate owners.

So, the decision to invest in research on E-Fuels seemed logical. At least up until now, when the company took some steps that seemed counterintuitive, at least at first sight.

First, a few days ago, Porsche presented the electric Mission R, labelled as its vision for the future of racing. Then, there has been the reply of Porsche’s CEO Oliver Blume to Italy’s objection to the 2035 ban of ICEs for low-volume manufacturers.

The Italian minister of ecological transition Roberto Cingolani claimed to be in talks with the European Union about the possibility of exempting low-volume manufacturers such as Ferrari, Pagani, and Lamborghini, from this ban.

Mr Blume opposed this request, saying that electric vehicles are more efficient, and also that the quest for a more sustainable industry must involve all its players, even those producing as little as 10,000 cars or less per year.

Why then a CEO would disapprove of the attempt at prolonging the life of internal combustion engines when its company is making large investments to develop an industrial plant aimed at that exact purpose?

Porsche aims at preserving the ICE as long as possible while also being fully focused on its electric future. With almost 15 years still to go, there is time for a softer transition even for the sports car dearest to its loyal customer base, while also being ahead of the competition with the electrification. Synthetic fuels could be the complement that will ensure a faster green transition, but most of all the preservation of existing Porsches, its classic icons, and pre-owned market which is a key component of a luxury car manufacturer brand strategy.