Aston Martin has just released its results for the first half of 2021. It has been a year since new CEO Tobias Moers took office, coming from its successful experience at AMG. A little less since the announcement of the renewed partnership between the British automaker and Mercedes-Benz. And over a year since the release of the company’s first SUV, DBX.

The changes have been numerous after Lawrence Stroll’s takeover and this last year was made even more difficult by the pandemic. Despite the challenges, Aston Martin seems to have gone through a period of ‘necessary evil’ to come out on the other side renewed and with a vision for the future.

The semi-annual report presents encouraging numbers. The first and most evident piece of data is the staggering increase in sales volume, which also confirms the expected success of the first and most important step in Aston Martin’s strategy for the future: the DBX.

The SUV, which has already significantly supported the company’s sales in 2020 during the pandemic, registers record sales in 2021. DBX so far reached 1,595 units sold, which account for almost 55% of the 2,901 overall figure. 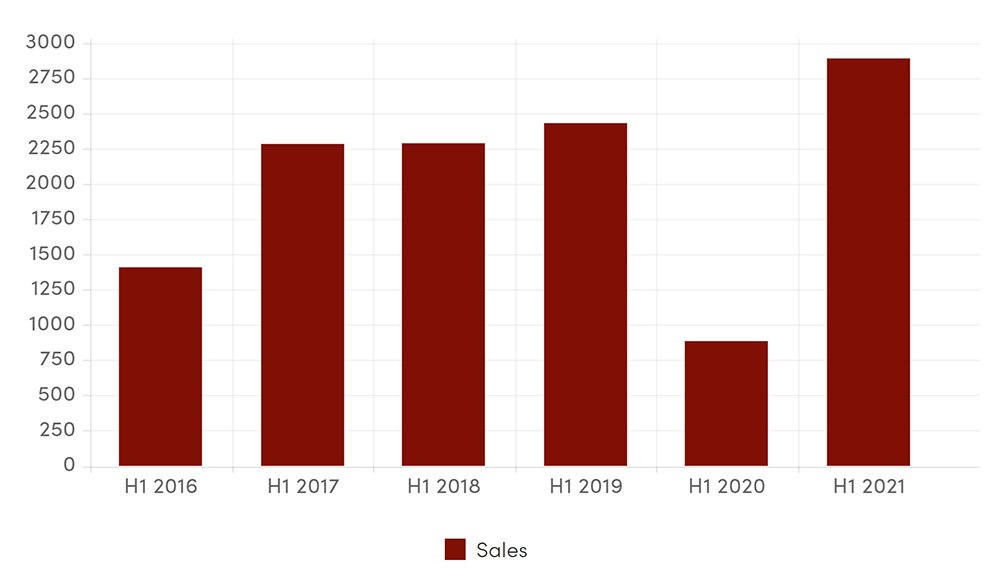 Apart from the SUV, the other two production segments, GT and Sport have grown as well. Even though the first was only by 2%, the second increased by 137%.

Compared to the previous YTD period, sales not only have grown by 224%, but they also represent a record overall, exceeding the previous one of 2,442 units in H1 2019.

Financially, the results are positive as well. Revenues too are at an all-time high with £499 mn. Additionally, EBITDA is positive, the Operating loss has been reduced significantly compared to 2020, and the selling price too has risen to the highest average since 2018, most likely thanks to the heavy destocking carried out last year. 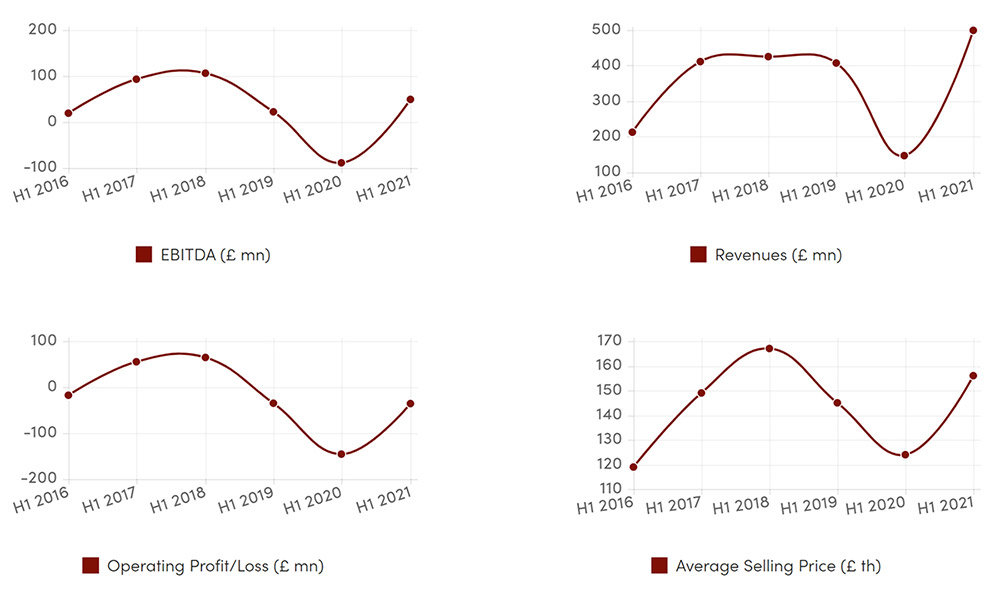 Other important events in Aston Martin’s development are the official release of the production-ready version of the mid-engine Valhalla, and the upcoming refresh of the front-engine line-up.

The first acclaimed concept of Aston Martin Valhalla was presented at the 2019 Geneva Motor Show, besides the two sisters, Valkyrie and Vanquish Vision concept. Due to the company’s difficult period, however, the production start has been delayed. That is up until July 15th, when the company finally unveiled the renewed and production-ready for Valhalla. Compared to its concept, some lines have changed, even though the overall sculpture respects the original one. The powertrain will also be different. While staying hybrid, the car will not be equipped with Aston Martin’s own V6, but with partner AMG’s twin-turbo V8 seen in the GT. Finally, its strategic positioning has changed as well. The car initially planned for just 500 units at over £1 million, will now reach 999 priced at around £800,000.

Starting from the biggest success, the DBX so far achieved what Aston Martin was planning for. A strong entry into the luxury segment of the fastest-growing category in automotive. Its continued success would ensure Aston Martin a proper recovery and the resources to keep developing its current line-up and future models.

According to Tobias Moers, in fact,

“the DBX offers the best combination of luxury and driving dynamics in the segment. Built on its own flexible platform, there will be many opportunities to expand our SUV range that simply aren’t offered by the competition. This presents a great opportunity to support our growth ambitions and medium-term plan.”

A second and equally important strategic factor is the refresh of the front-engine GT and Sport ranges coming in 2023 which will implement Mercedes-Benz's latest technology and should boost the sales of the front-engine cars up to 3,500/4,000 units. This will translate into the hybridization of the existing product lines and the overall update of the interiors and especially the infotainment systems that are now significantly outdated when compared to the competition in the same price bracket. The front-engine range refresh, along with the production of Valkyrie, Valhalla, and Vanquish, which will not be limited, should contribute to reaching the overall volume expected, around 10,000 vehicles. 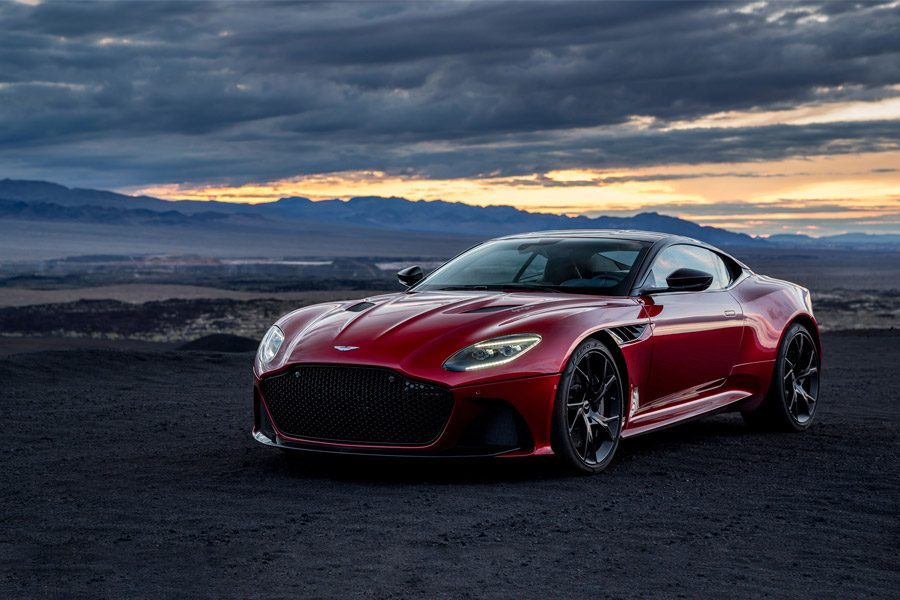 There is then the successful rebalancing of supply and demand. With the complete destocking, Aston Martin can employ the ‘Ferrari-like’ build-to-order model that Lawrence Stroll wanted to implement right from the start. This will improve the brand status, and should limit the cars’ depreciation.

Other operational improvements have been carried out with regards to production optimization and improved efficiency that in turn help achieving higher margins per vehicle and waste savings.

Despite the positive results of 2021, there are some significant risks with the company’s current strategy.

Along with risks linked to the political, or regulatory environment, potential unexpected evolutions of the Covid-19 pandemic, supply chain, and financial conditions, some factors are more tightly connected to the company’s recent changes.

The first is a potential high reliance on just a single model, the DBX. While highly unlikely that the good sales results achieved so far might suddenly stop or decrease significantly in the second half of the year or even in 2022, right now Aston Martin is forced to rely too heavily on a single model.

Potential delays, as happened with Valhalla, in the refresh of the existing product line could compromise the company’s financial situation. After all, the range suffered a big hit in 2020 due to the pandemic. But, while the Sport range showed a natural improvement, the GT one, which includes the most iconic models has remained almost stagnating, which is already a worrying sign during a year of strong recovery.

Secondly, the Aston Martin F1 campaign so far has been more difficult than anticipated. With Racing Point F1 Team (now Aston Martin Cognizant F1 Team) missing the third spot in the Championship in 2020 for a handful of points, Aston Martin was expected to be off to a great start in 2021.

However, a change of regulations impacted some teams more than others, and Aston Martin was one of these. So, despite some strong results, and the positive effect on the media of having in the team a beloved character, and successful champion such as Sebastian Vettel, the season so far has been difficult.

If the form of the team and the results do not improve, this could seriously impact the company’s image as well.

Finally, one last relevant factor of risk could be the one connected with the company’s entry into the mid-engine segment. While Valkyrie has been a mediatic success right from the start and it is expected as one of the most special hypercars of the current generations, the same is not sure yet for its smaller sister Valhalla. 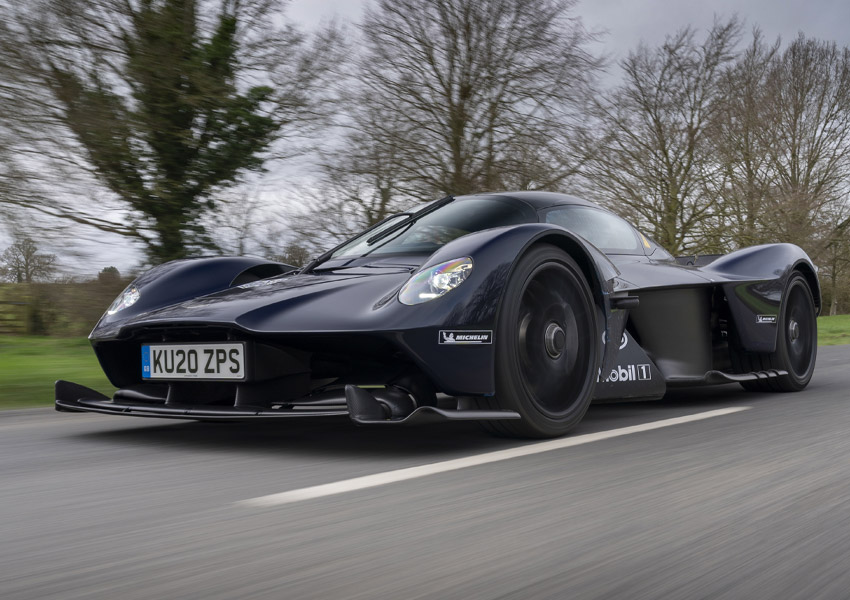 The car was significantly delayed first and now has been changed in some key aspects as mentioned before. Some did not appreciate too much the substitution of an Aston-Martin in-house engine with the AMG one, which could make the car less ‘special’ or less ‘unique’. Plus, in this segment, Aston Martin goes against some fierce competition with companies that have a much longer experience. The likes of Ferrari, McLaren, and Lamborghini. So, even though the revised version of the Aston Martin Valhalla generally received positive reviews, it remains to be seen if it will be a market success as well.

Another issue connected to the upcoming mid-engine line-up is the potential delay of the Vanquish. The one that should become the proper core of Aston Martin’s mid-engine range. As the company encountered hindrances during its restructuring program, a delay (or even a cancellation) of such an important addition, that represents the fifth production series of the automaker, would also be a serious matter.

So far, however, since the acquisition by Stroll and the management, and operational restructuring, while it has not been all plain sailing, Aston Martin has achieved a lot. All the factors listed above contributed to an overall change of image and perception of the brand, that through sports, partnerships and new media will become the point of reference of the new generations. And this specific strategic and communication shift so far has been nothing but successful.