Should Lamborghini produce a GT car?

Nowadays, Lamborghini is, for the most part, synonymous with flashy, futuristic-looking, impractical, “uncomfortable”, but luxurious, beautiful, and crazy-fast 2-seater supercars. Naturally, being impractical, and uncomfortable, to a certain extent, is not a concern for a Lamborghini owner. Because anyone who buys a car like this knows exactly what is signing up for.

After the Miura in the 60s and 70s, and even more after the Countach that has become a proper Icon of the 80s, Lamborghini’s main focus has become producing V12-powered (later V10 too) flagship supercars. As the years passed, along with maintaining the values mentioned before, the main focus for these cars has been offering outstanding performance. And they have achieved some noteworthy results. The latest with the Aventador SVJ at the Nurburgring (and we could expect more from the recently released Huracán STO). But the top-class performance and the right driving experience come with a cost. Harsh ride quality and weight-saving measures are a natural requirement. So uncomfortable does not mean that who buys a Lamborghini gets bad seats but will get the most appropriate gear to drive fast and properly enjoy the car’s capabilities. The same goes for poor practicality, these cars are born for the track, not for long trips.

In the beginning, though, I wrote “for the most part” because at the end of 2017, to the two product lines Aventador and Huracán, Lamborghini added the SUV Urus. This latest addition certainly addresses both the characteristics of comfort and practicality that lack in the other two, as well as giving the brand access to the hottest market segment right now. Saying, in fact, that Urus is just a mere part of Lamborghini’s production might seem an understatement as since its inception it straight doubled the company’s numbers. In the last two years, it sold more than 50% of Lamborghini’s total output. 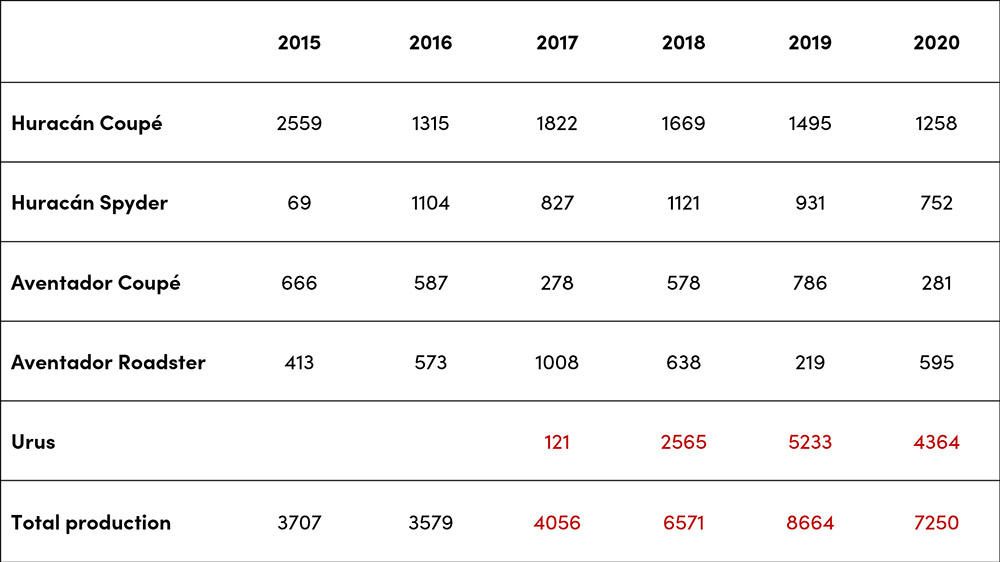 But there is another popular category when it comes to luxury super and sports cars. The Grand Touring, or GT. Usually, a 2+2, 2, or 4-door, high-performance car that is more practical and suited for long trips in style. A range of vehicles for customers who want the thrill of speed, and the status of an iconic brand while also being able to enjoy a daily-drive luxurious experience.

So, why does Lamborghini not produce GTs? And most of all, would it be a good idea?

HAS IT ALWAYS BEEN THE CASE?

The first criticism that could pop into one’s mind is that this kind of vehicle could be perceived as out of brand and dilute its image. But there are two strong arguments in favour. First is the success of the Urus which speaks for itself. Second, as some purists still criticise the idea of a different class of Lamborghini cars, it is sufficient to back up a little and have a look at the manufacturer’s history.

At its birth, in the vision of the founder Ferruccio Lamborghini, the company would have produced luxurious and sporty grand tourers. Its first cars, the 350GT, and the successor 400GT were just that. Lamborghini did not want to sacrifice interior refinement and comfort in favour of performance.

Later came the Espada from the previous concept Marzal. At the same time, Lamborghini produced also a short run of the GT Islero, followed by the Jarama. After these models, through the 80s the direction changed, with an increasing focus on super and sports cars. From the flagship Countach to the entry-level Urraco, Silhouette, and Jalpa.

It is on the back of this tradition, that in 2008 in Paris, Lamborghini introduced the GT concept Estoque, celebrating the Espada even in the name (which is also the name of the bullfighters’ weapon). Why then, the Estoque never became a production model?

There has been quite a lot of speculation on this topic. Some bring the marketing factor, some the brand image. However, one factor that likely affected the decision-making process was also the most severe financial crisis of the 2000s that at the time of the Estoque reveal, 2009, was in its worst phase.

WHAT ABOUT THE FUTURE?

Right now, there are rumours of a 4-door Lamborghini set to arrive in 2025 and representing effectively a fourth product line for the company. But as its development should begin this year and might have well been delayed by the pandemic aftermath, there are no sure info about it.

But would it be worth it? Is the market big enough for such a model? After all, the largest automotive trend of the last few years in pretty much every price segment is the SUVs growing popularity. That meant a general loss of interest for saloon cars. This is reflected in the overall sales within the luxury market too. 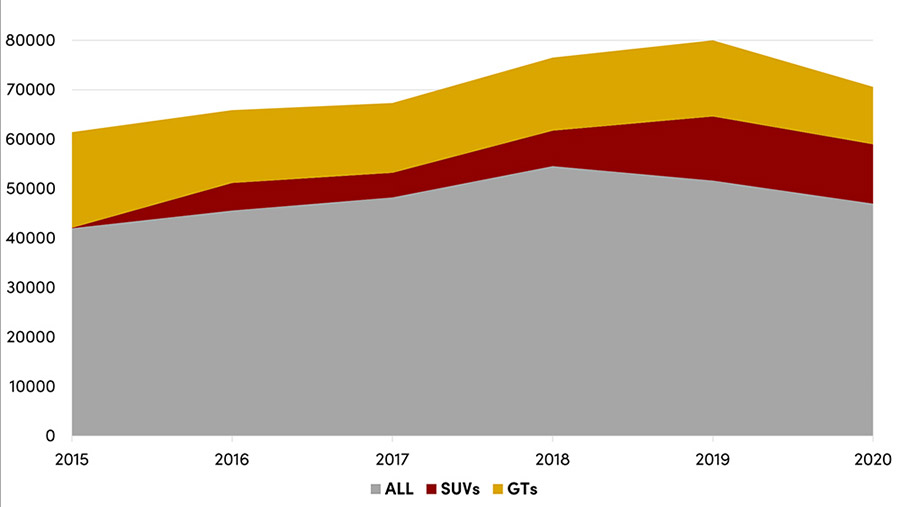 *Data are based on official data from Aston Martin, Bentley, Bugatti, Ferrari, McLaren, Lamborghini, Porsche, Rolls-Royce.
**Porsche’s data include only 911 and special/limited series due to pricing

The graph shows some interesting trends. In the last five years, as expected the SUV segment has been expanding and remained consistent in 2020 despite the exceptional situation that brought an overall decrease in sales in the sector. Additionally, this product type segment will most likely expand even more. The new Aston Martin DBX, which has experienced strong sales and order, has just been delivered in Q4 of 2020, and Ferrari will soon release its own competitor Purosangue.

At the same time though, it is also interesting to observe that the GT segment, after losing 24% in 2016 compared to the previous year, has remained strong up until 2020, where it also endured a drop. But, if Porsche’s experience with SUVs before any other company (not included in the graph because of the different price bracket) is anything to go by, there might be a new factor strengthening the GT section. It is electrification. Only in its first year, the Taycan has been a commercial success with over 20,000 units delivered. So, not only the GT segment is currently strong, but, even if it does not have the SUV momentum, it shows growth potential through new technologies.

In this sense, Lamborghini would have a range of options. Excluding the pure ICE due to increasingly restrictive environmental regulations, a new GT coming in the next 4 to 5 years, could either use a hybrid powertrain or be even more daring with a full-electric one. In both cases, Lamborghini has the big advantage of a platform used extensively within the VW Group.

The MSB architecture, born in 2016 with the Panamera, has been used as a platform for Bentley Continental GT and Flying Spur, as well as for the EVs Taycan and the new Audi e-Tron GT. Like it happened for the Urus this would help drive the development costs down significantly. 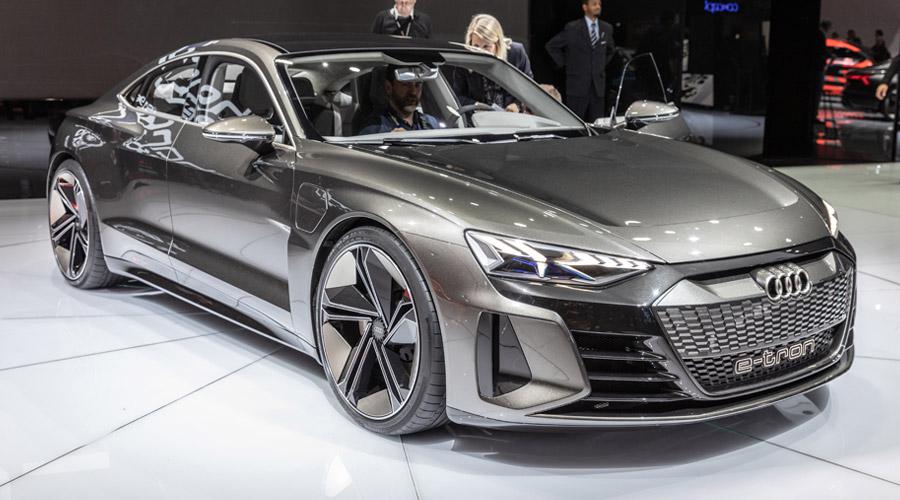 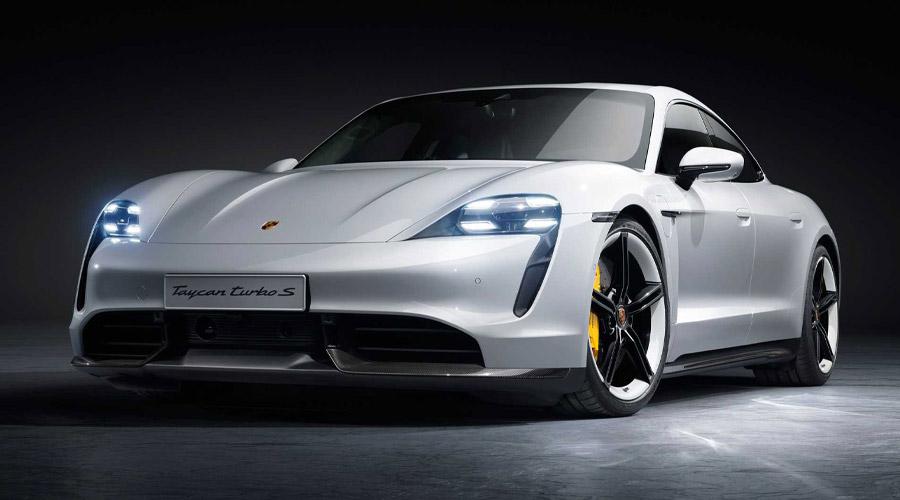 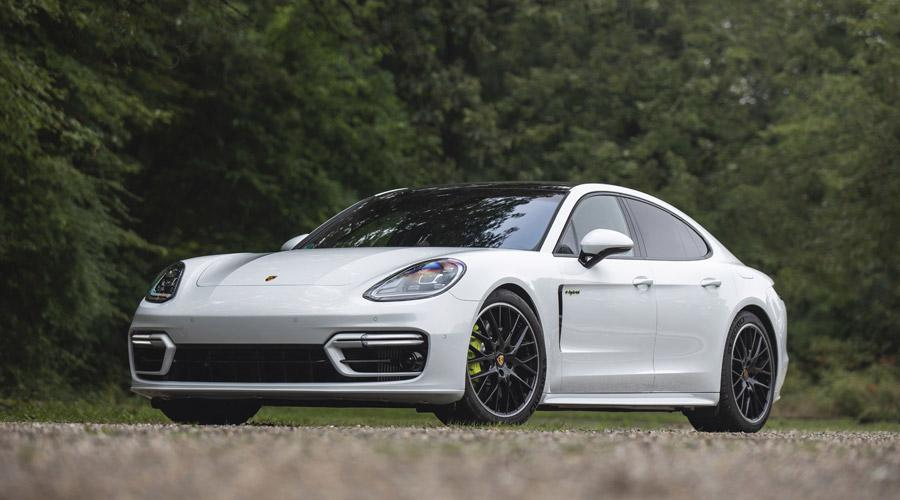 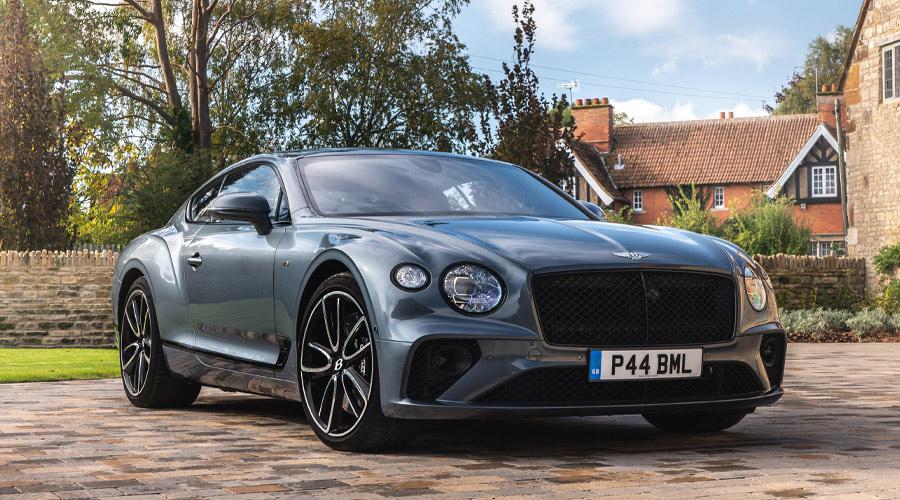 Also, Lamborghini’s success on social media indicates that the brand enjoys a younger audience than other competitors, which as highlighted in a previous analysis is more open to electrification even in the luxury sports car segment.

In this regard though, there is the potential challenge of a GT car perception. Grand Tourers are often aimed at a more mature audience or families. So, even if just partially, such a model could be more disconnected from the brand’s core audience.

In the modern luxury automotive market, along with Porsche that diversified its offering heavily way earlier, many competitors are adopting a similar strategy. Even with different starting points, the majority of the companies are expanding to cater to vastly different audiences. From Aston Martin that just introduced an SUV and will soon release its first line of mid-engine supercars, to Ferrari that after a shooting brake, further expanded with the new GT Roma, the hybrid SF90 Stradale, and will soon release its own SUV, to McLaren with its GT. Even, a super low-volume production company like Koenigsegg, on constant research for innovation with the Gemera offered an extremely different product.

Lamborghini removed any doubts about brand dilution with the success of the Urus. And as much as the SUV was part of its history thanks to the LM002 in the 80s, the GT is too when the very origins of the company are taken into consideration.

The parent company platforms present an extremely advantageous opportunity to reduce R&D costs. So, as long as the Italian automaker maintains its image of ‘Future Shaper’ without compromising on features and quality, creating a daily-driver that can appeal to a wider and younger audience, its strong crowd of customers and admirers who might become clients, will likely follow new and daring projects.