A few hours ago, Mercedes-Benz CEO Ola Kaellenius went back to the much-discussed Vision EQXX. The focus is again on the impressive range the concept would be capable of.

The Vision EQXX was presented first at the beginning of the year and developed in just 18 months. Most importantly, it showcased in numbers all the aspects that Mercedes truly believes are key for the EV sector of tomorrow, and which the OEM has already been pursuing with all the other models of the EQ range (its EV product line). The first two metrics mentioned by Kaellenius himself are in fact drag coefficient and battery range. 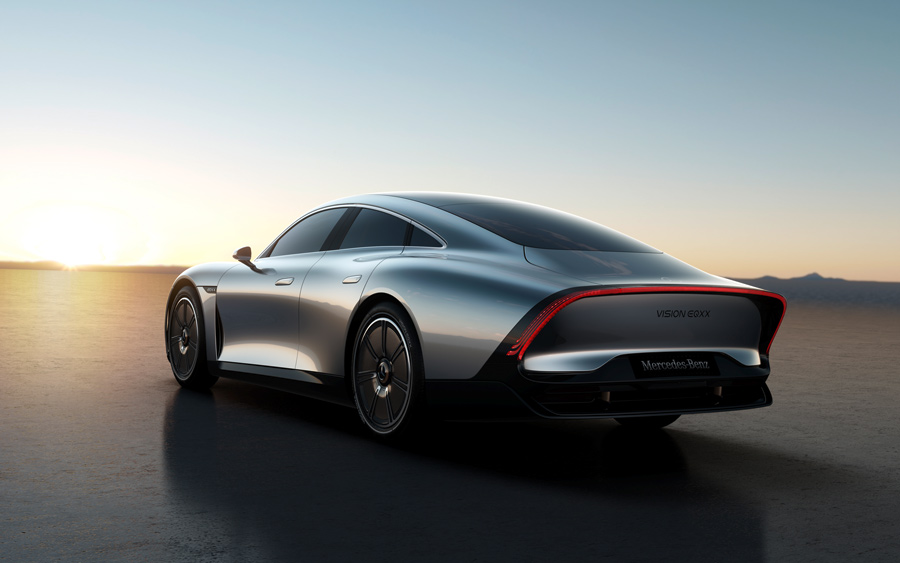 How is the market shaping the EV purchasing decisions? Which are the factors affecting the choice and how different OEMs in the segment are approaching it?

Challenges in the EV market

From the customer point of view, demand is surely increasing, and mass adoption is expected rather soon. According to a report by McKinsey, the most important factors affecting customers’ decision are always related to battery, range performance, and charging capabilities.

Also, there is a difference in general preferences with regards to features, where EV buyers are on average more accustomed to the use of digital channels, more personalised and seamless options that rely on new technologies. Naturally, considering the overall direction of our everyday life, and our evolving relationship with technology, it is easy to see how connectivity and other digital integrations will likely become increasingly important for a purchase decision. Especially in the volume market, they will presumably become proper deal-breakers.

Naturally, along with these come different variables separated from the specific characteristics of a vehicle but that still influence the overall EV adoption rate.

The main ones are regulations and incentives. China which, as mentioned by Reuters, is reducing its subsidies by 30% in 2022 and intends to completely phase them out from 2023 on, is a good example. In the first month of the year, the BEV sales dropped by 18.6% following the incentives cut, and this is something that happened already before and on which Beijing went back and forth a few times already. 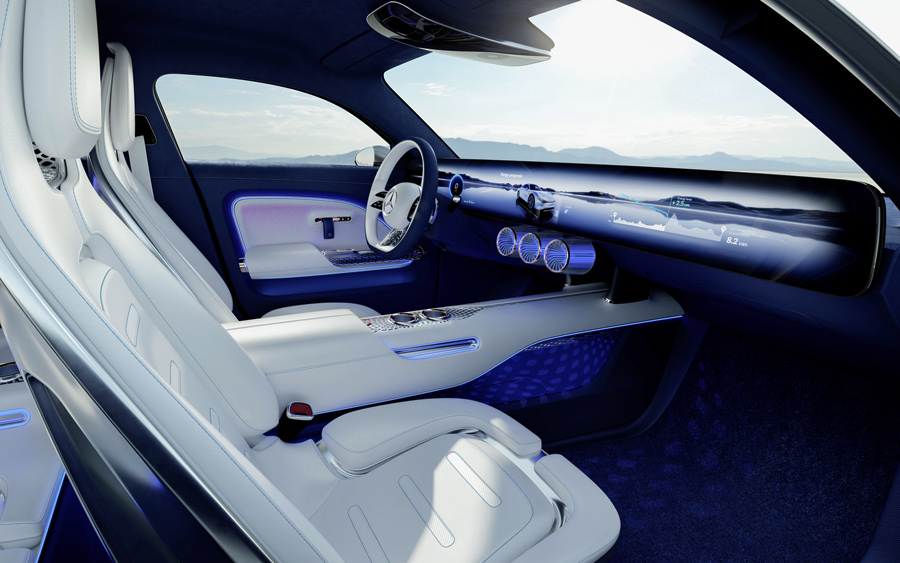 Infrastructure development is another defining factor, directly connected with “range anxiety”, especially in countries where this is felt the most.
In my overview EV Market growth 3 years later: China and the rest of the world I highlighted how best-selling models’ characteristics in different continents change significantly. In particular, in China except for the booming Model 3, small and cheap EVs with pretty short-range are by far the best selling ones, which indicates how price sensitivity is more relevant than range anxiety there.

On the other hand though, in Europe and the US, this is definitely important. Tesla got and still has a significant advantage over the competition thanks to its “apple-like” model. The OEM created a vertically integrated ecosystem that gives it complete control over its charging network resulting in the most prominent competitive advantage over any other manufacturer today.

To secure a stronger position in the EV segment, McKinsey again proposes a series of 7 steps that could help OEMs' go-to-market strategy, or even strengthen that of brands that have already moved into the electrification space.

This is particularly interesting because some points reflect strategic moves that have already been adopted by some OEMs.

Mercedes Vision EQXX, and the rest of the industry

Mercedes claims some proper class-leading numbers with this concept, which if achieved in relatively short times could be real game-changers.

The Vision EQXX claims a drag coefficient of just 0.17, the lowest in the industry. A record that right now is held at 0.2 by both the American Lucid Air, and again Mercedes’s flagship EQS. The German automaker has been aggressively pursuing this target, which is very evident from their decisive change in design with the entire EQ model range.

Secondly, the range is set at 1000 km thanks to higher battery energy density, with the current record-holder still being the Lucid Air which is claimed to reach a range of 830 km thanks to around 105 kWh of battery capacity. 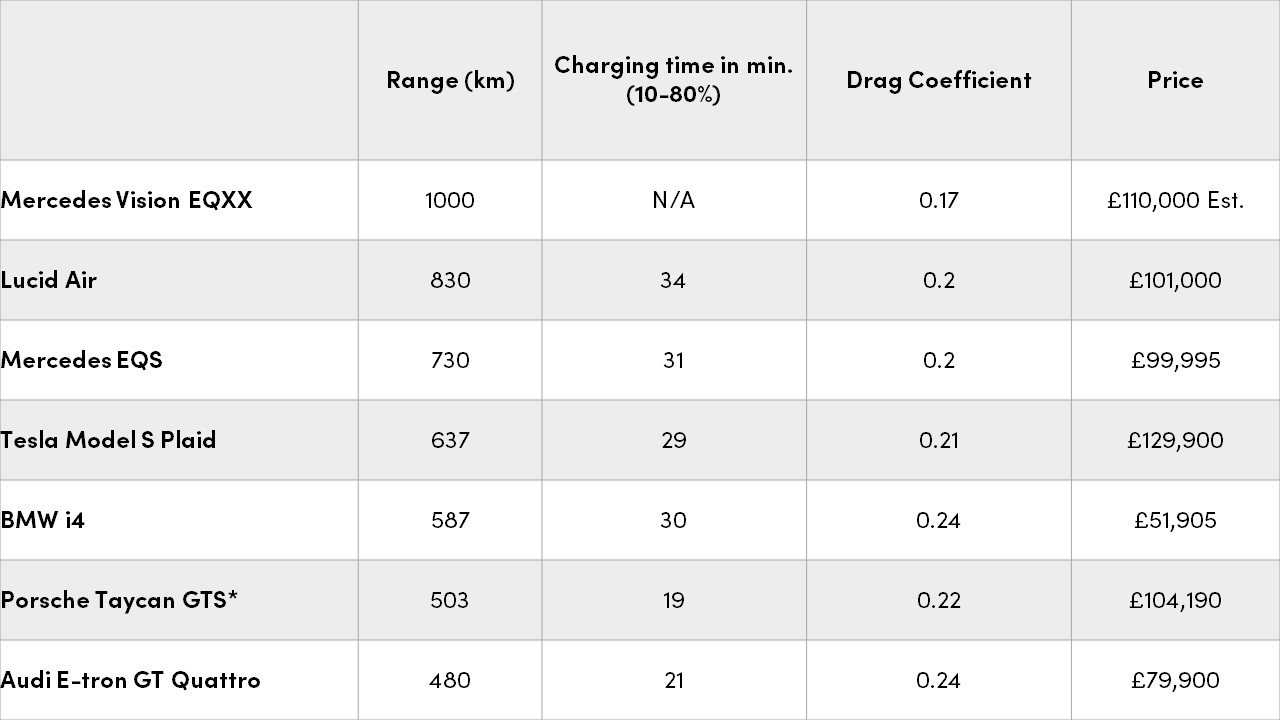 Overall, within the same segment of 4-door luxury saloon cars, there is a certain alignment in terms of charging and range performance, with two main differences. The first is that the BMW i4 (which is soon to be followed by the i7) is much cheaper than the competition, around half the price of most other models. So, a relatively lower performance can be expected. The second is that VW Group seems to have taken a different approach to this trend. Both Taycan and E-Tron GT, in fact, have a significantly lower range than their competitors but charge from 10 to 80% significantly quicker.

Different strategies could be more successful in certain countries and vice versa. While it seems that the majority of the luxury players are focusing on the increased range, the path taken by Porsche and Audi that here share the same platform too for Taycan and E-Tron GT could be the best as range anxiety fades.

Mercedes Vision EQXX anyway, sets important targets, and not just for range, but for weight as well. Because the OEM claims a battery pack weight reduction of 30% which is a massive deal, considering that batteries weight has been one of the major factors affecting car performance and driveability, especially for sporty models. Time will tell in which way the market will move forward, and major brands taking quite different approaches make everything even more unpredictable.