In 2021 Aston Martin reported strong sales, close again to its 2018 all-time high (just 4% less) almost doubling its 2020 figures. Financial performance too shows positive signs. Despite being still far from that of some of its competitors, every improving metric demonstrates the results of a clear vision for the future of the company that so far has delivered on many promises.

Naturally, the OEM is still not out of the woods completely. 2022 and the next few years will be crucial to proving its strategy and product line’s resilience. Special focus will be on the SUV segment which has been one of the pillars of this strong recovery, and on the electrification strategy, on which Aston Martin is still slightly behind its competitors as of now.

However, the new team and management at Aston Martin are no slouch, and important steps have been taken to reinforce the company position in these respects. So let’s see how the automaker is preparing to face this decade of transformation and big challenges, and also what kind of competition it is going to face.

Project Horizon is the path set by Aston Martin and announced by new CEO Tobias Moers, which much like the Cor Tauri plan for Lamborghini, defines the company’s short to mid-term future.

The first is, of course, the SUV development. As mentioned, 2021 was a good year for Aston Martin which delivered 3,001 DBXs capturing almost 20% of the luxury SUV segment. 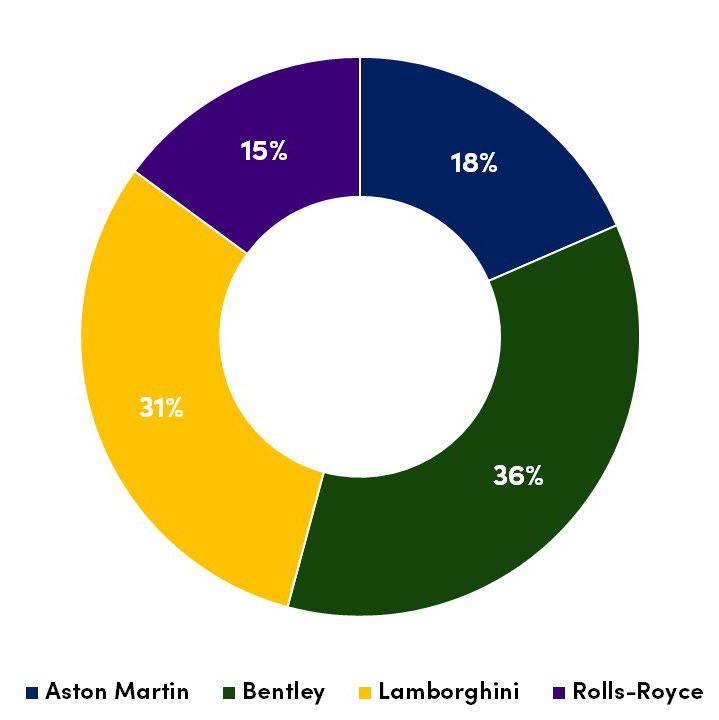 *Percentages are likely to be slightly lower as Porsche is not included in this graph, but out of its 83,071 Cayenne sold, the Turbo S E-Hybrid, Turbo S E-Hybrid Coupé, and Turbo GT have pricing that is comparable to those of the models accounted for in the graph.

As mentioned, the continued positive performance of the SUV model will be extremely important for Aston Martin, and to that end, the company has already realised two variants that enrich the range and offer a better market coverage. The mild-hybrid DBX Straight Six, offered only in China (perhaps to better cope with import regulations for ICE vehicles), and the performance-focused DBX 707, quoted right now as the most powerful SUV on the market.

So, the timing is also quite perfect for the latter. DBX 707 has been released in advance of an incoming strong competition in the form of the Ferrari Purosangue, and updated, more powerful Lamborghini Urus EVO, which gives it a significant opportunity over 2022 to grab a larger share of the market for top performance SUVs.

2. Entry in another new segment

The second aspect of the strategy is the renewal of the other models in the line-up. The most important step is the introduction o three new mid-engine models which effectively introduce Aston Martin to a completely new segment as well.

Deliveries of the hypercar Valkyrie have started at the end of 2021, and Mr. Moers claimed deliveries of the Valhalla will begin by 2024. To these will follow also the new Vanquish, presented as a concept in 2019 at Geneva Motor Show, which will fit in the line-up as a lower-tier sports car below the more powerful Valhalla. 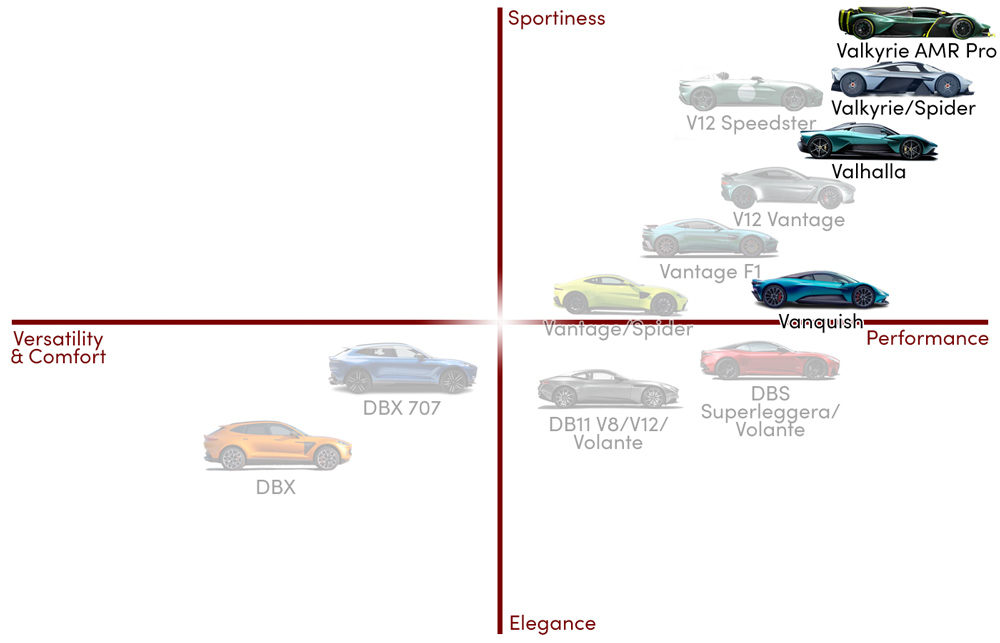 The third model like the first two will be a hybrid. And last but not least, there will also be the Valkyrie AMR Pro, a track-only version of the hypercar with even more extreme characteristics.

The other models which are, and have been for years now, the core products of Aston Martin’s line-up will also receive updates and gradually hybridised. Most of all, thanks to the renewed deal with Mercedes-Benz they will get updated, cutting-edge interior technology.

These will also be complemented by more limited editions. For instance, over the last year and a half, to also celebrate the entry in Formula 1, and the deal for the use of Vantage and DBX as Championship safety cars, the Vantage has been released in two distinct limited editions inspired by this new experience. The F1 Edition, and the V12. Along with these series, more Continuation models will be produced as well, continuing the trend of increasing personalised, rare, and exclusive luxury and sports cars.

As discussed in a previous article, the customer journey in today's market is almost as important as the product itself. And this is especially true in the luxury segment. So, this has been one of Aston Martin's main focus within the Project Horizon Strategy.

One of the most important improvements has been the release of a new car configurator. The new software offers a seamless, more flexible, and enjoyable experience. Thanks to constantly improving 3d graphic engines, the new configurators offer a more immersive and realistic visual experience, as well as the possibility to create both images and video content of the model as specified in the software.

This forward-looking momentum, also meant that Aston Martin had to hire new people to bring in the expertise necessary for electric powertrain development, software, and other related skills.

First of all, in March 2021, the OEM completed its destocking. A key step to move forward in its change to a build-to-order business model.

Secondly, Aston Martin is looking to strengthen its presence in Asia and in the US which are both sizeably smaller than the EMEA region in terms of sales.

The other area for improvement targeted is the efficiency in various steps of the production process. From reduced waste in the paint shop to a consolidation of the production lines in the Gaydon plant. The combination of these different factors resulted in a 20% reduction in manufacturing cost per unit.

These measures are complemented by a renewed ESG (Environmental, Social, Governance) strategy. In particular, the commitment to reduced emissions and carbon footprint according to the Science-Based Targets initiative (SBTi), to eventually reach its Net-Zero Standard.

Yes, plans have changed also for the second brand owned by Aston Martin. The Lagonda brand initially set to be revived during the Palmer leadership, will not be developed as an independent one. This decision will serve to bring more efficiency to the business as well, focusing on the sole Aston Martin brand.

However, the Lagonda badge will not be completely abandoned. It will likely be featured in future luxury-oriented models, delivering a function similar to that of the Maybach brand for Mercedes.

What about the competition?

In the short term, the biggest challenges will likely be the competition in the SUV market and the product line electrification.

The luxury SUV market has been consistently growing in these years, and the pandemic did not significantly impact the numbers. But the competition is increasing and automakers are starting to diversify significantly within the segment, with Porsche leading the way in this sense. 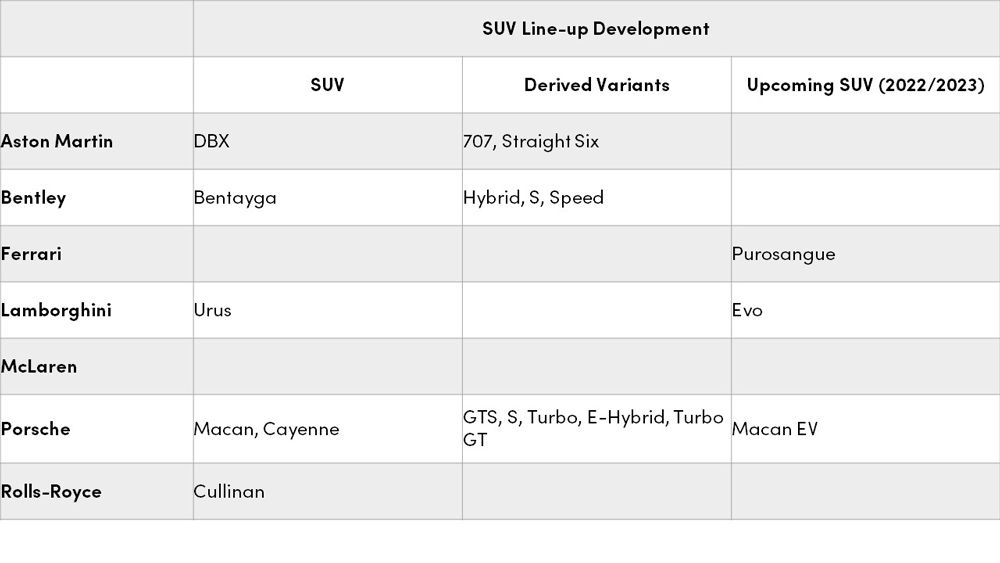 Strategically speaking though, Aston Martin seems well-positioned. Having quickly released both the DBX 707 and the Straight Six soon after the base model has certainly given the OEM a competitive advantage over part of the competition.

As for the electrification process instead, the situation is quite difficult to judge and impossible to predict. There are many factors at play, and most of the manufacturers in this segment are only starting to approach the change. Porsche once again ahead is about to introduce its third full-electric model, the Macan, its best-selling model of 2021. If the trend follows the success of the Taycan and Taycan Cross Turismo, the new EV could become a best-seller very soon as well. 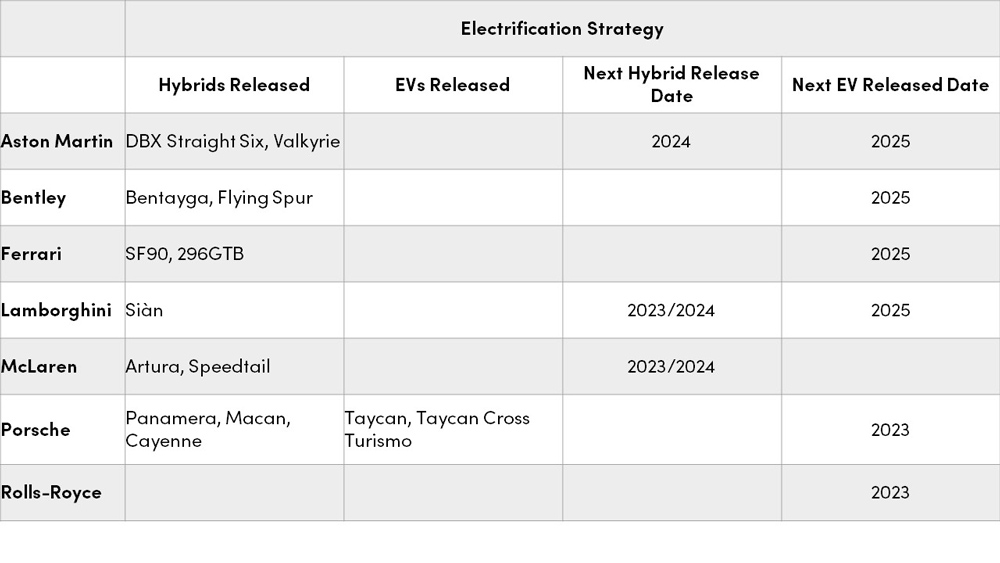 All the other competitors have similar deadlines for the next hybrid or full-electric models, albeit most of them with significantly different approaches or implementation strategies. This time too Aston Martin benefitted from its ties with Mercedes that provided the engine for the hybrid DBX Straight six, proving once more how this partnership could be a crucial factor for the success of the company in the future.