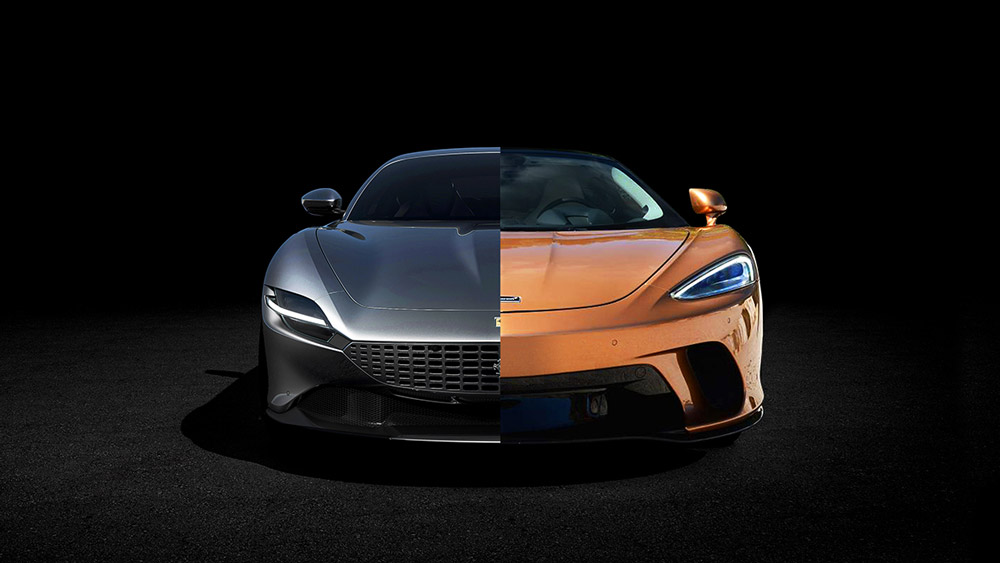 In 2019, Ferrari and McLaren both launched two new models that expanded their respective lineup and market coverage. The Roma and the GT, which especially for McLaren Automotive represents a totally new segment, aim at competing with models such as 911, Vantage, or DB11 looking at the pricing, and generally more luxurious grand tourers. It is no coincidence then that as of now (I doubt it will last long), when searching for ‘Ferrari Roma’ on Google it is actually the Bentley Continental GT that comes up at the top of the ranking (image below). The house of Maranello, in fact, quotes Bentley along with BMW, Mercedes, Aston Martin, and Rolls-Royce among its competitors for the new model.

Both McLaren and Ferrari’s options though do not look like direct competition for the more luxury-oriented leaders of the segment like Bentley with the mentioned Continental GT or Mercedes with the AMG S63. This is clearer by looking at some of the vehicles’ characteristics. While the latter two weigh respectively 2165 and 2065 Kg the former with around one-fourth of it are weighted at 1530 and 1472 Kg. A similar feature is true for Rolls-Royce as well, with the additional difference of a much higher price range to access the brand. 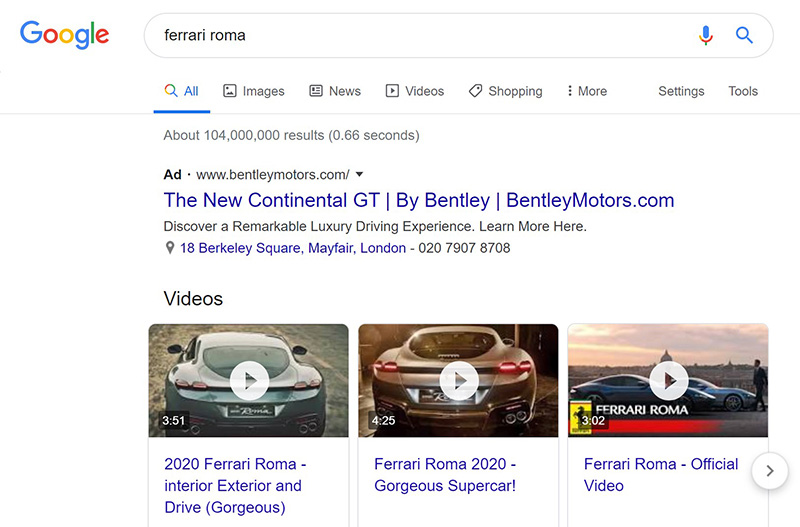 Also, GT and Roma preserve a strong component of sportiness, confirmed not only by the early reviews but well-highlighted by the manufacturers themselves in their marketing strategies. While the other brands’ models despite having a similar power output market their models more as pure luxury cars. Such a difference is also evident in the interiors where Bentley, Mercedes, and Rolls-Royce focus much more on the super-luxury in every small detail. This does not mean that Ferrari or McLaren display an inferior quality level, but once again the sporty heritage is still present and visible in both these new models. Their competition with these will arguably be mainly against Aston Martin (as well as with each other of course), but it is still a new niche for both the brands.

If the target looks similar though, the objective might not be the same. Both the brands have registered a continued growth for quite a few years in a market that differently from the mass automotive market experienced consistent growth as well for the majority of the low-volume luxury performance car manufacturers.

In 2018, Ferrari and McLaren reached record deliveries in their history with 9,251 and 4,829. Ferrari exceeded that record in 2019, surpassing the 10,000 vehicles mark at 10,131 units. Data for McLaren’s full-year are not available yet, and despite the further financial growth with 19 per cent more revenues, up to Q3 sales figures, momentum seemed to falter with a decrease of 4.5 per cent, from 3,463 to 3,306. The house of Woking is aiming with its Track25 plan at reaching 6,000 units sales by 2025, and despite the quarterly slowdown, they expect sales to be in line with 2018. So, without a huge jump in sales or even with a slight decrease, they are not far from their mark. Considering that low-volume manufacturers often deliberately limit their sales number (something that Ferrari did in the past) to maintain their status within the industry and their exclusivity, the Roma looks like a diversification aimed at offering a more understated and luxury-oriented option to surprise and retain customers more than increasing the sales figures massively. McLaren on the other hand so far has been only focused on high-performance sports and supercars. The expansion toward a more daily-drivable car could prove the trump card to reach their strategic goals like happened for other manufacturers in this space such as Ferrari itself, Aston, and Lamborghini. 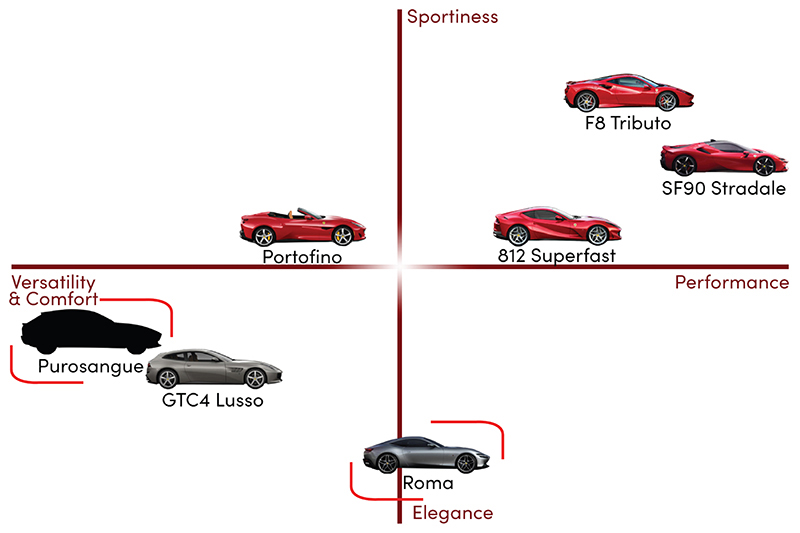 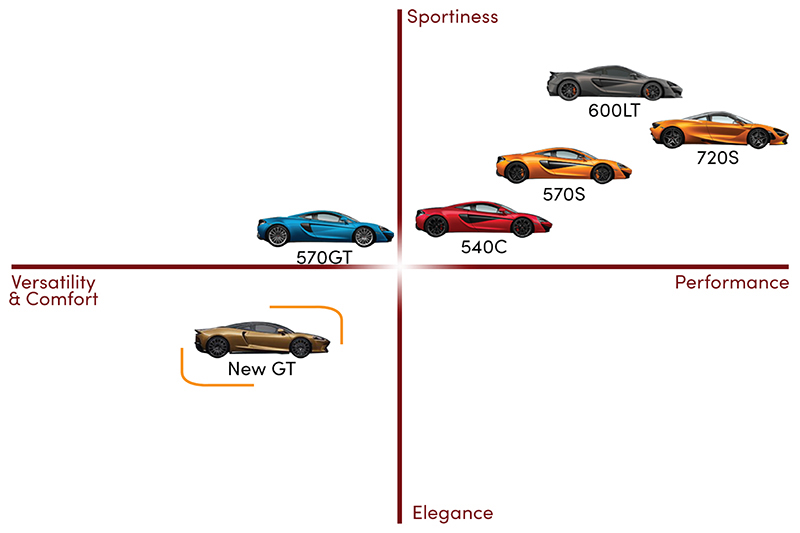 WHAT ABOUT OTHER SIMILARITIES?

Ferrari and McLaren both have a unique marketing channel which is the first that comes to mind when someone mention their names, and no one else in this market has (so far). A Formula 1 team. But there are indeed a few more, strictly related to the automotive business. The first is the release of two limited edition highly exclusive speedsters. On Ferrari’s side, the Monza SP1 and SP2 (one and two-seater) on McLaren’s the Elva. Both cars are extremely limited, 499 units the Ferrari, 399 the McLaren, with similar power output around 800 bhp and similar price, £1.4 and £1.6 million respectively (before options). Both flagships also pay tribute to the classics of the two manufacturers. The Monza part of the Icona series celebrates Ferrari’s most iconic classics like 250 Testa Rossa and 750 Monza. The Elva recalls classic open-top race cars conceived by Bruce McLaren in the 60s and outsourced at the time to the British manufacturer Elva.

SUV OR NO SUV

The second, at least for the time being, is that both the companies do not have an SUV in their lineup. The vehicle that has completely changed the game for almost all the other players in the segment, and on which Aston Martin that just released its own is relying to save the day.

It is known by now though that Ferrari is just ‘late’ but developing a vehicle called ‘Purosangue’ that will come in 2021 and will supposedly be an SUV. While Ferrari does not explicitly call it like that, it implies a new ‘body shape’ mentioning its future technical challenges with a new architecture. McLaren instead, up until now explicitly claimed they are not going to build one. The reasons are several, from an already crowded segment to the difficulties for a ‘small’ low-volume manufacturer to develop an entirely new platform both in terms of time, due also to lack of expertise, and financial resources, up to the difficulties of remaining true to the brand values.

These are probably also the reasons why it took Ferrari longer than other brands to enter the segment. Company values, resources, and time. First of all, the brand is one of the most important assets that these companies have. As it demonstrates a survey conducted among luxury performance car owners about the factors affecting their purchasing decision (Table below). 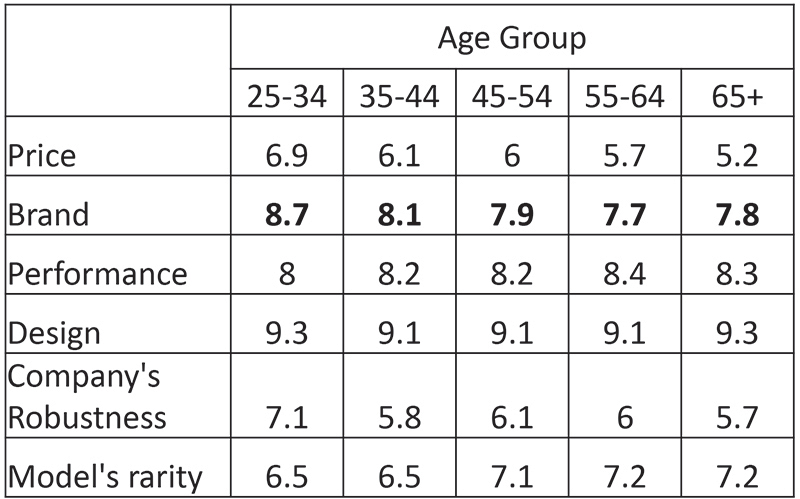 Survey involving 243 Luxury Performance car owners from the US, Europe, and Asia.

In each age group, on a scale from 1 to 10, the Brand is firmly marked as the third (and second for 25-35 age group) most important factor for the purchase decision. This analysis reflects also a changing luxury market trend by highlighting how for younger generations the Brand is gaining even more importance.

Secondly, for the firms under the VW umbrella, an SUV was a much different challenge as for instance both Lamborghini and Bentley’s models were based on Audi’s platforms. Aston Martin in its marketing, instead, highlighted numerous times how long it took for them to develop a completely new platform just for the DBX, which according to them will also be one of the keys to their success. A development process that could relate to that of Ferrari’s Purosangue.

The two companies in this market segment that have the most in common, starting from their important Formula1 heritage, have been developing product strategies with different similarities, and both successful even though with different rates (McLaren Automotive is effectively just a 10-year-old company after all).

For the future, considering a likely high sales figure for Maranello’s SUV, if the trend continues, it will be interesting to see if Ferrari will again voluntarily limit its sales that, at the current market condition, could easily reach the 2,000 units, or adopt any strategy to preserve the brand exclusivity. As for McLaren, is not certain yet if they plan to hit their Track25 plan marks with the current lineup or further diversify, and if so, in which direction.

Finally, it must be noted that regardless of any strategy, the consistent risk for disruption caused by the Coronavirus, especially with regards to the Chinese market, is affecting and will likely keep affecting both the manufacturers’ supply chain and sales performance for 2020.