Luxury Automotive Resale Value and Depreciation: How and Why

Resale value is an extremely important factor in the luxury automotive sector as it affects different stakeholders and impacts the company long-term. Scarcity and exclusivity are arguably the most important elements of any strategy in this niche and are applied to different extents by every company. This allows maintaining a healthy balance between supply and demand, at least for this industry. And I specify this because as Enzo Ferrari himself said, perfectly exemplifying this concept:

“Ferrari will always deliver one car less than the market demand”

The production here is not about satisfying the demand. But creating more than what the market can supply. While overproduction is detrimental in any sector, that is even more relevant in luxury automotive. Oversupply can impact resale value negatively, scaring away potential clients and collectors who also buy these cars as investments, and ultimately diluting the brand value.

It is somewhat counterintuitive how right now the majority of luxury automakers are seemingly overlooking the ‘brand dilution’ factor with SUVs’ production numbers. One example is Lamborghini that has been steadily drastically increasing its production and sales in the last three years just thanks to the SUV Urus, while the other models have been decreasing the majority of times (with 2020 of course impacted by the pandemic). However, this trend should at least in the short-term help preserving the value of sold Huracán and Aventador.

A similar trend is observable in Rolls-Royce’s delivery numbers with Cullinan and other models, while Bentley despite the Bentayga outselling the rest of its range, registered extreme variations with the other models too, Flying Spur and Continental GT.

However, the production number in relation to demand is not the only factor affecting car depreciation. Others being mileage, production year, and, even if they are more difficult to define under precise variables, perceived brand value, and market segment.

Let’s have a look at some segments and how the models’ market value behaves.

Every luxury automaker has an ‘entry level’ car that gives clients access to the brand, as it is significantly cheaper than flagship models. These cars are, of course, still much more expensive than mass-produced ones, but they usually still end up selling well over 10,000 units over their entire lifecycle. It must be noted however that very often, new clients actually access a brand through the pre-owned market rather than with a new car. For this reason, many companies run official pre-owned programs.

The models reviewed here are Aston Martin Vantage Coupé, Ferrari Portofino, McLaren 540C, and Lamborghini Huracán Coupé (LP 610-4 and LP 580-2) for sale in the UK market registered between 2017 and 2020. 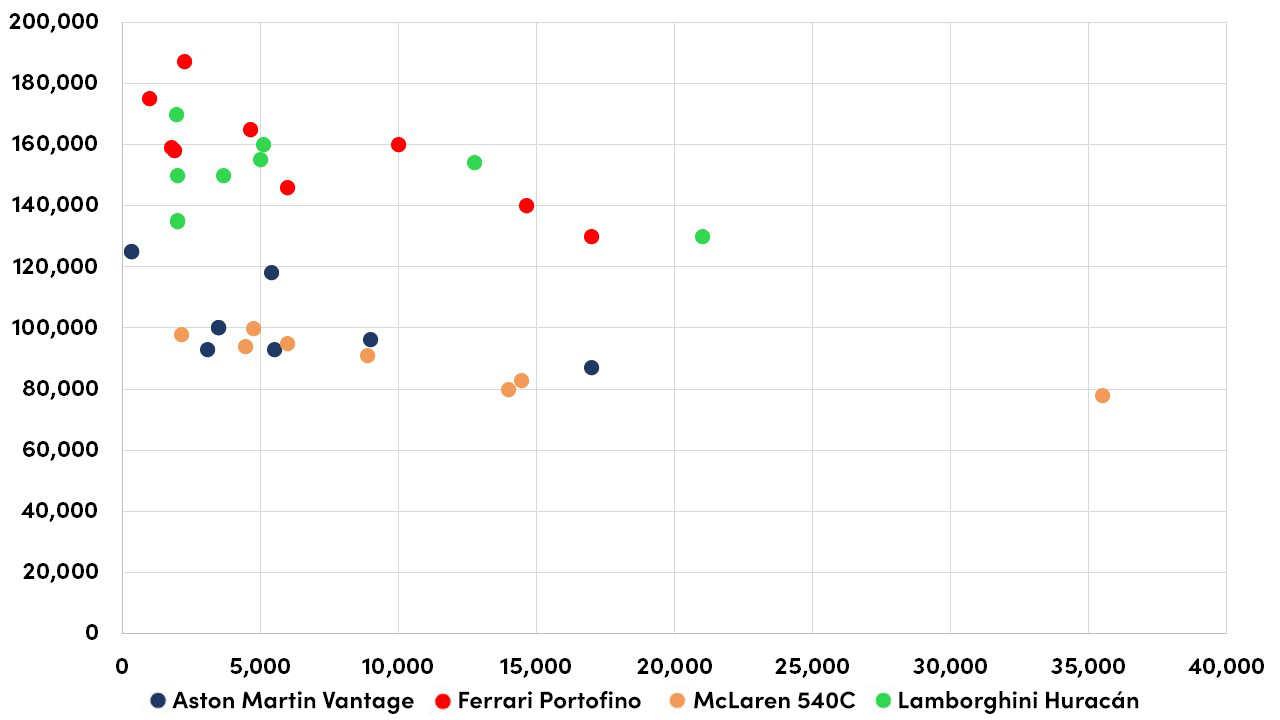 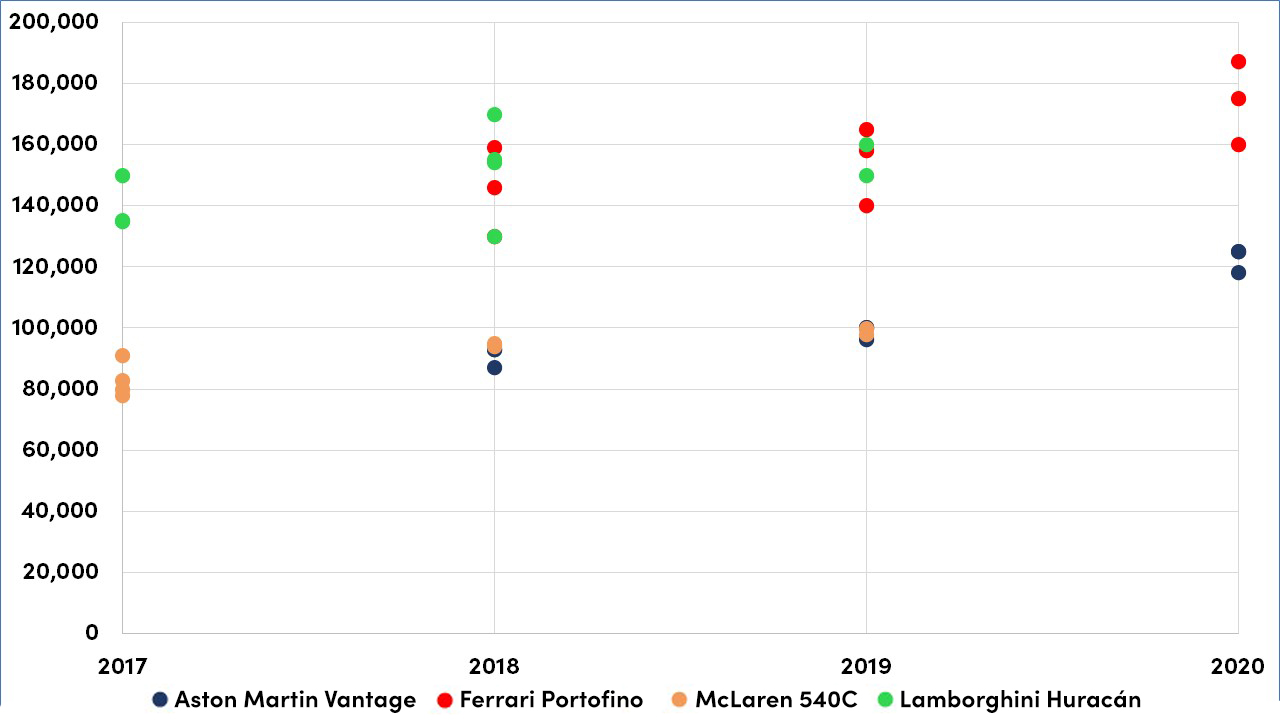 Some interesting observations come from these first two graphs. The two models that seem to depreciate the most after one year are Vantage and Portofino, while the other two do not vary much. All of them, however, depreciate significantly due to mileage, where a range between 5 and 10,000 miles can cause up to £10,000 decrease in value.

The second interesting segment is the luxury one, usually featuring Grand Tourers more than pure sports cars. For this segment, the models reviewed are Aston Martin DB11, Bentley Continental GT Coupé, Ferrari GTC4 Lusso (V12), Rolls-Royce Wraith. The cars are comparable as even though both Aston Martin and Ferrari have a strong ‘Sport’ component, in each automaker’s product line these are the most luxurious options. As for Bentley and Rolls-Royce which are more luxury-oriented, Continental GT and Wraith represent the sportier 2-door option, instead of the full-fledged luxury flagship. The years covered are the same as before. 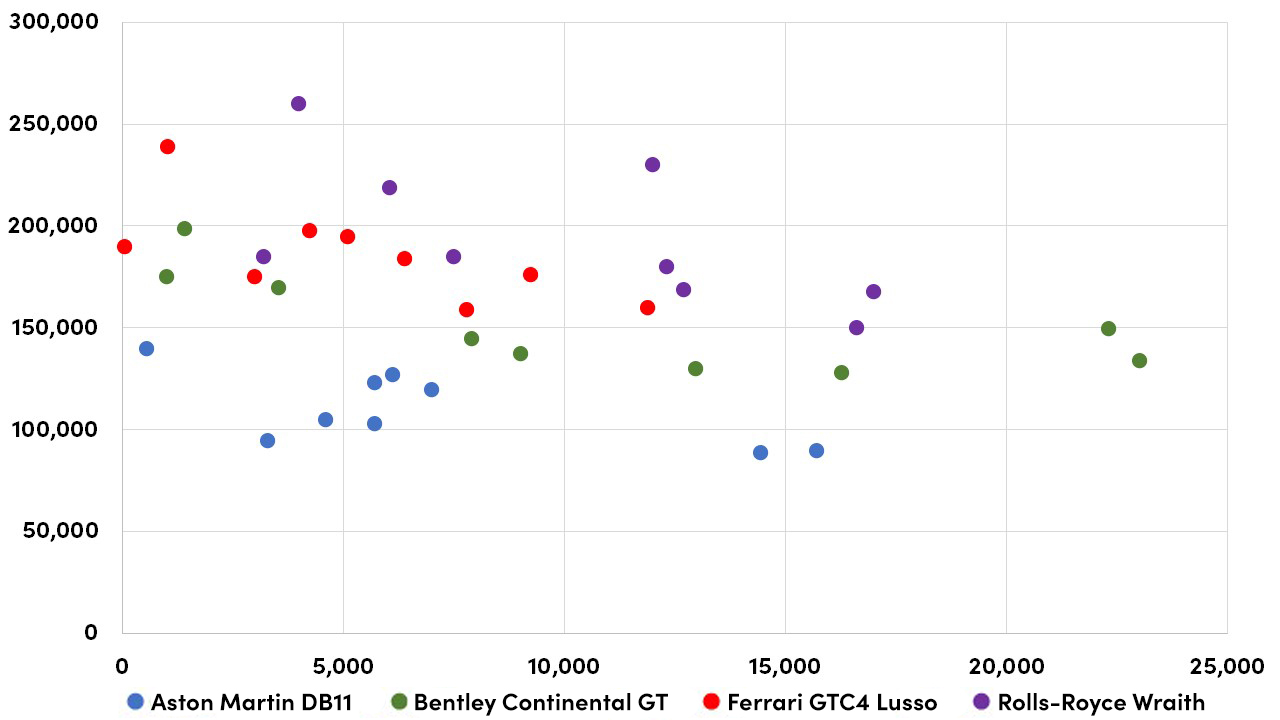 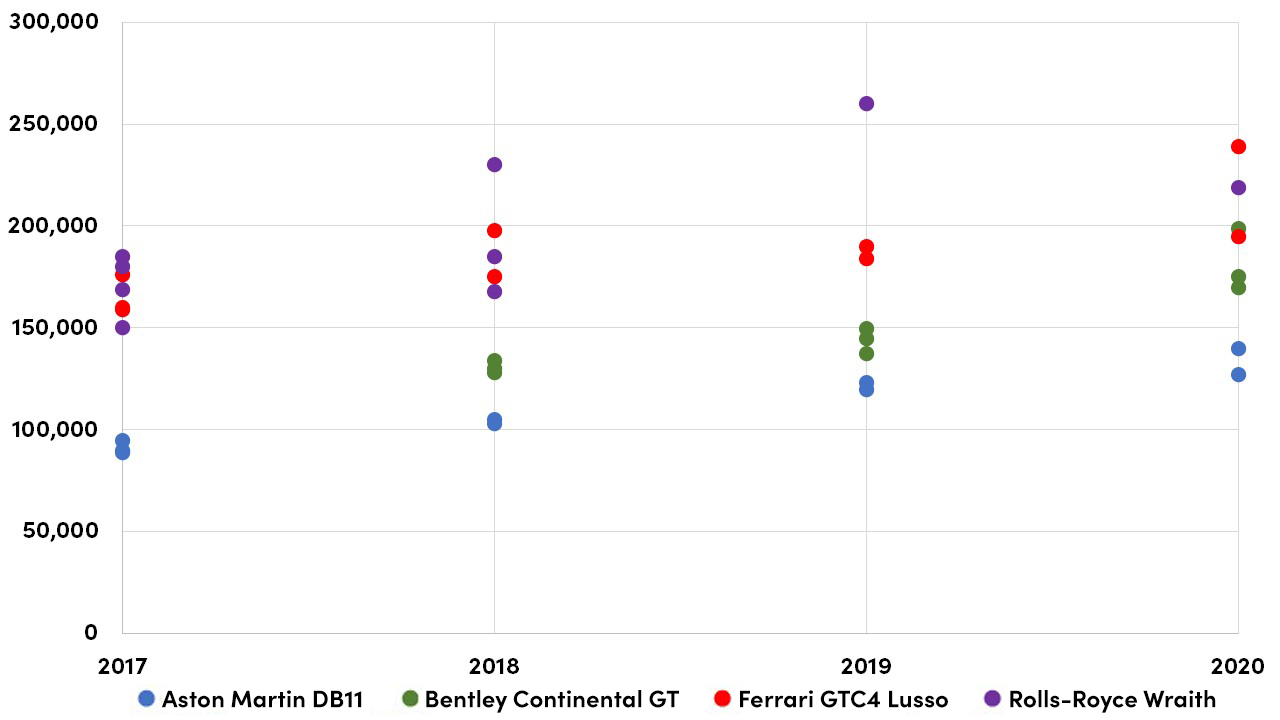 In this segment, cars suffer a higher depreciation rate compared to the other two. The causes can be different. First of all, being cars engineered for everyday use, they usually have higher mileage than sports cars. Another reason could be a lower demand for pre-owned luxury cars that are often driven by a chauffeur and are highly personalised such as a Rolls-Royce, which is not developed to offer the thrill of fast driving. The two models that experience the most absolute depreciation from mileage are Wraith and GTC4 Lusso. On the other hand, the Ferrari is the one that seems to maintain its value through different years.

The four models included in the graphs below from the 2017-2020 period are Aston Martin DBS Superleggera, Ferrari 488 GTB, McLaren 720s, and Lamborghini Aventador S. 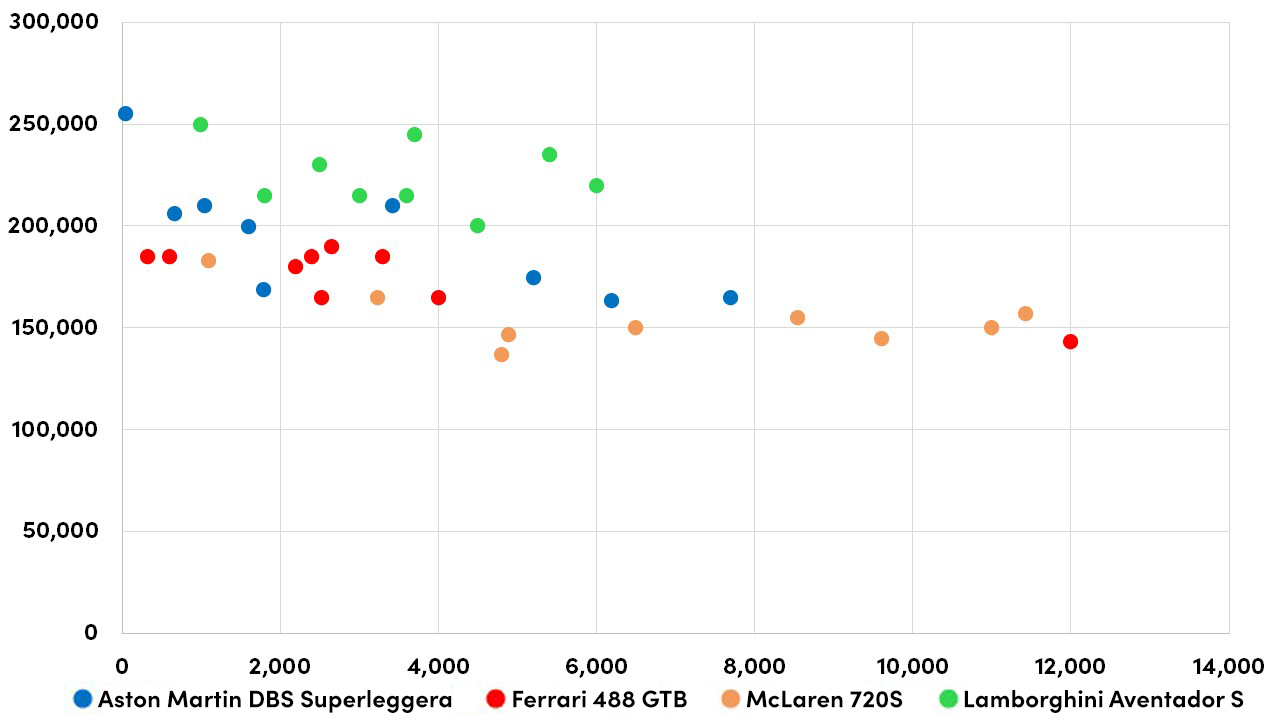 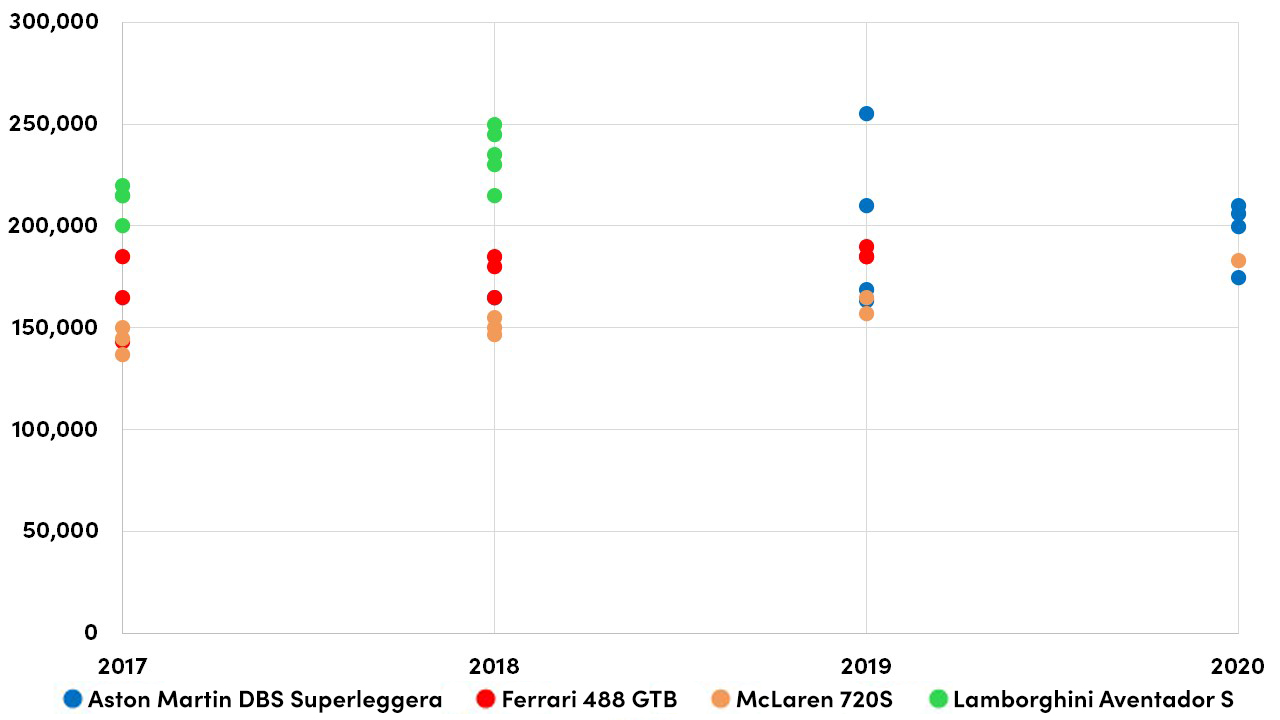 From these two graphs, it can be observed how DBS Superleggera and 720S suffer the most depreciation due to mileage increase. As for the registration year, the differences are more visible for the 720s again, and the Aventador S. Both Aston Martin and Ferrari here do not lose too much value from one year to the other.

SOLUTIONS ADOPTED BY COMPANIES TO AVOID OR LIMIT DEPRECIATION

Of all the models observed, Ferraris are the ones that maintain most of their value. Lamborghini Aventador too seems to not depreciate drastically. As for the others, they all show a significant depreciation over 3 to 4 years that goes from around 30% up to 50% in the worst cases.

This is most likely due to the production model. As mentioned in previous articles, while Ferrari adopts the production-to-order approach, others do not. This might result in oversupply and value loss due to low demand. The two companies that are affected by the highest depreciation of the ones reviewed are Aston Martin and McLaren.

Aston Martin comes out of two very difficult years, and during 2020 put a lot of effort into destocking to translate to a Ferrari-like business model as highlighted previously. As for McLaren, it had with having similar issues, as well as having been hit severely by the pandemic. Also, the strategy of releasing an extremely high number of special limited edition series, and derivatives of the Sports Series 570S in just 10 years, probably took some exclusivity away from each model and had a detrimental effect overall. This is likely a major factor behind the significant loss of value of an exclusive model such as the Senna on the used market. 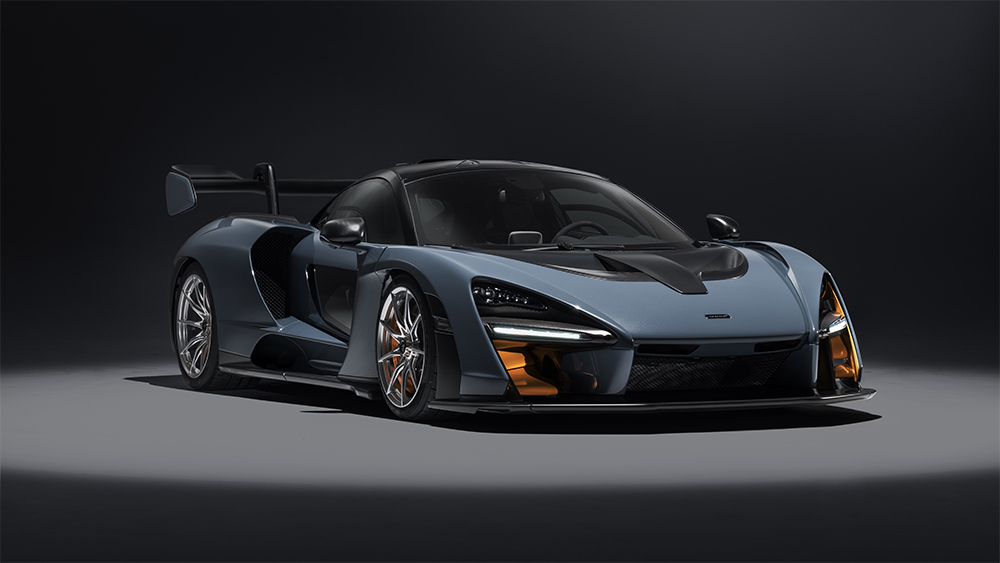 A measure that is quite common to increase car desirability, is the one applied by the likes of Ferrari and Pagani of allocating slots for the limited series only to top clients who already collect the brand’s cars. Ferrari uses this strategy for some production models too. They will not sell certain cars to clients who are more likely to sell them very quickly or have proven to not being loyal to the brand.

Finally, these two companies, along with others, also have a specialised pre-owned program in which they buy back cars from dealers, and once (if needed) these are serviced and restored to perfection they are put on sale again. This is a great solution not only to sell used cars at a premium compared to other platforms, thanks to the OEM’s certification but also to control the supply. Deliberately limiting the presence of used vehicles on the market is a ‘manipulation’ that can help drive up their value.