As of now, India is the fourth largest automotive market in the world. The luxury segment though accounts for less than 2% of the total due to high import tariffs that can be as high as 100% and due to the unique peculiarities of the Indian market. This subsequently hampers the growth efforts of high-end foreign automakers. 2021 has even seen this percentage drop below 1%.

The pandemic further exacerbated this situation as in 2021, imported vehicles’ sales were down by over 51%, to a mere 19,781 units (Zigwheels.com) compared to 2020.

However, there might be opportunities for these car manufacturers to establish a more solid presence in the Indian market, and it starts with electrification. But first, let’s back up a bit and see what is happening and how these automakers can hope to secure a foothold in this part of Asia.

Despite the huge population and the size of the mobility sector, the market composition is extremely different from that of other large countries in Asia, Europe, or America. Over 80% of the market, in fact, is composed of two-wheelers. Passenger cars instead do not reach a 15% share of the market. As for sales they peaked at 3.4 million in 2019, as did the market overall with 26.8 million vehicles sold. The remaining percentage is accounted for by commercial vehicles and three-wheelers. This balance has remained pretty much unchanged over the last 15 to 20 years.

Passenger car sales in India by Year (in million units) 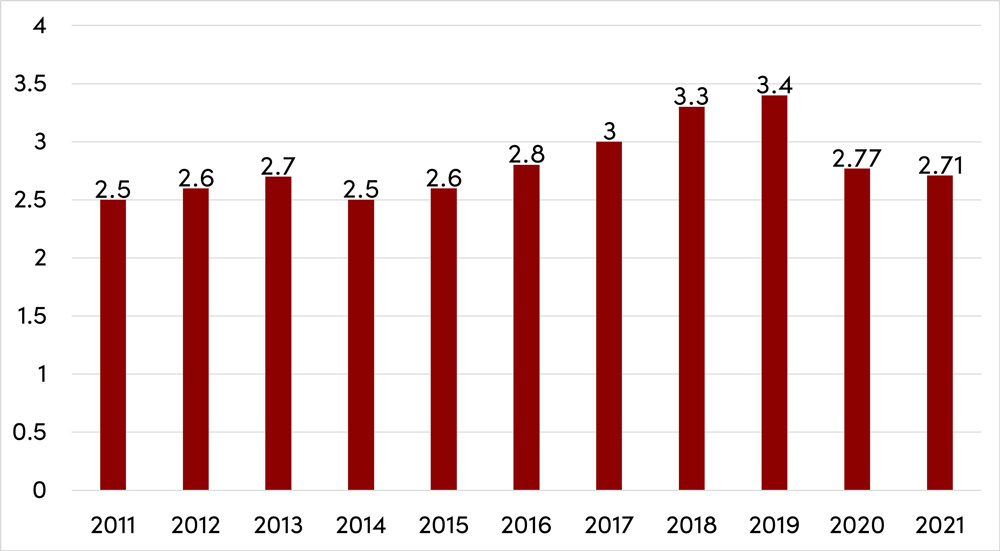 The government expects the market to grow to reach third place behind only China and the US pushed also by a CAGR of 44% of the EV segment between 2020 and 2027. But again it is probably not the EV segment that many can imagine. India so far has a per capita income of around $2000, but it has increased rapidly since the 2000s. Over the last 20 years, it increased by 374%.

India GDP Per Capita by Year

Also, in 2020, India recorded a 5.9% growth in the High-net-worth individuals (HNWI) population, which was higher than the whole Asia-Pacific region. But the country is still far behind other large developed or developing nations. In the US, which has the highest number of HNWIs and represents the single largest national market for several luxury automakers, this group of people accounts for 2% of the entire population. In India, right now, it only reaches 0.02% of the population.

High-Net-Worth Individuals population in India (in '000) 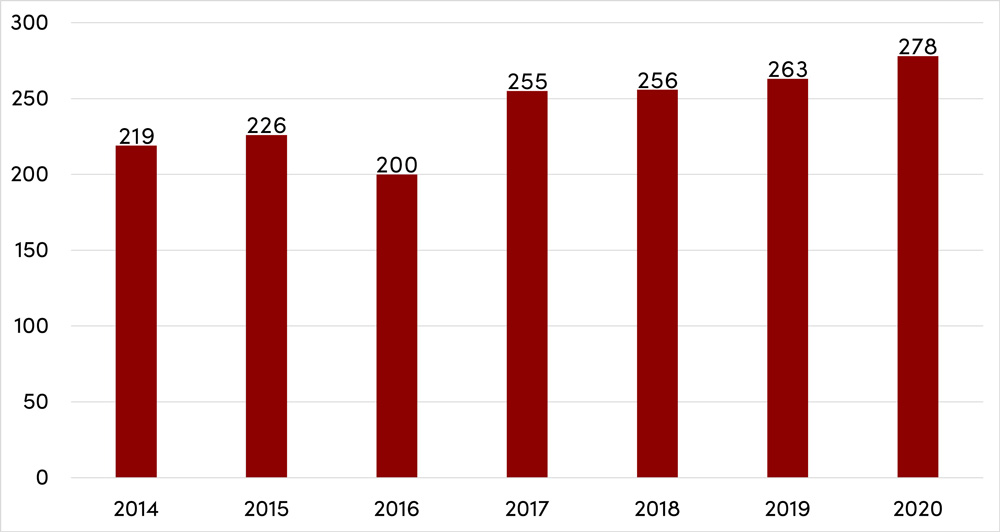 Adding Goods & Services Tax (GST) and Compensation cess, the duty can go up by another 50% on large SUVs and luxury cars. And here is also where the difference with Electric vehicles starts. GST on EVs in fact is only 5%.

In 2015, the Indian government started a scheme called Faster Adoption and Manufacturing of Hybrid and Electric Vehicles (FAME), dedicating INR 8.95 billion (£88.5 million, €106 million) for subsidies on every category of electric vehicles, from two to four wheels. Incentives can reach up to €1,775 (£1,480) under this scheme.

FAME has been subsequently revised in 2019 and called FAME II. The second phase of the program instead established an INR 100 billion (£988 million, €1.183 billion) investment with around 85% dedicated to incentives for the purchase of EVs and the remaining 15% for the infrastructure development. Incentives come in direct price reduction for the consumer which is then reimbursed by the Government to the OEM who has registered at the National Automotive Board of the Department of Heavy Industry. They are calculated as INR 10,000 (£99, €118) per kWh for passenger cars (and they are 50% higher for two-wheelers).

The Indian Ministry of Heavy Industries reports an INR 8 billion (£79 million, €95 million) of incentives claimed so far with 225,011 EVs sold.

As far as import duty, electric vehicles right now do not enjoy any preferential treatment. And this, a few months ago, attracted the concern of Tesla’s CEO Elon Musk. Despite being invited by different Indian States Government representatives to set up production locally, Musk has called for import taxes cut more than once. 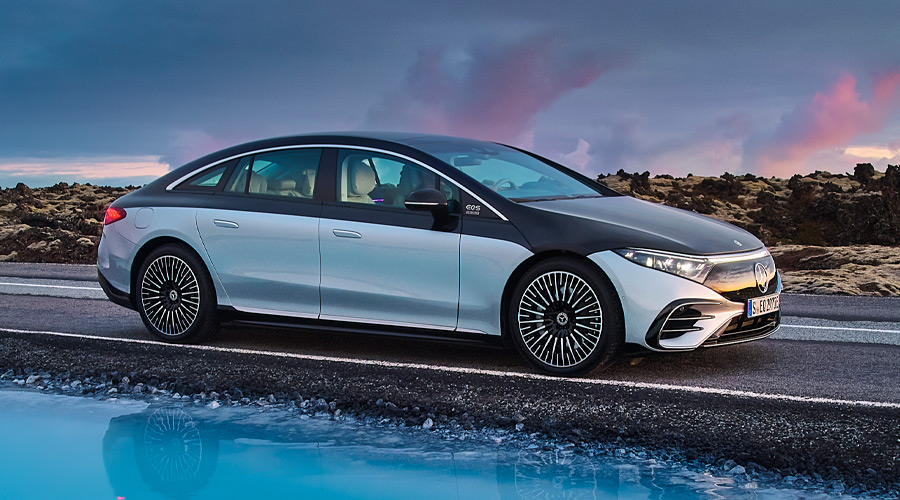 Reuters reports that discussions between the company and the Indian government are stalling as it seems that no tax reduction is to be expected anytime soon. At the same time, Musk refuses to commit to any plan to set up factories in India as long as the Government does not grant any tax relief. So, from the outside, it looks like a vicious circle for now.

Other companies too have been outspoken regarding this issue. Mercedes-Benz India MD Martin Schwenk told the Economic Times that this policy hinders the market development and introduction of new technologies. Also, Mercedes which in 2020 sold 7,893 units in India, reckons that despite some locally assembled models, localising the production locally is not a viable option. The low volumes do not justify the investment required to set up production in India, and Indian Finance Minister has further increased by 5-7.5% the import duty on several components. Nonetheless, the company plans to expand its line-up bringing the full-electric EQS to India in 2022.

Is there an opportunity for Luxury Automaker?

The scenario for foreign OEMs is quite complicated, and with the change to electrification, it probably will not improve for ICE cars. Right now, the Government’s push to develop an EV market though is an important opportunity for those companies that assemble CKD vehicles in India.

Thanks to much lower GST (only 5%) and import duty compared to CBU cars, selling EVs is not going to be as expensive. This also means less commitment to the market which, as of now, could not have a wide enough target audience, as observed earlier. So, even though it has developed rapidly over the last 20 years, it could still be a risky bet for the future. For this reason, it seems unlikely that any of these OEMs will decide to directly establish production locally. And right now competitors like Audi, BMW, and Volvo too, along with Mercedes are mostly looking at imports or local assembly. 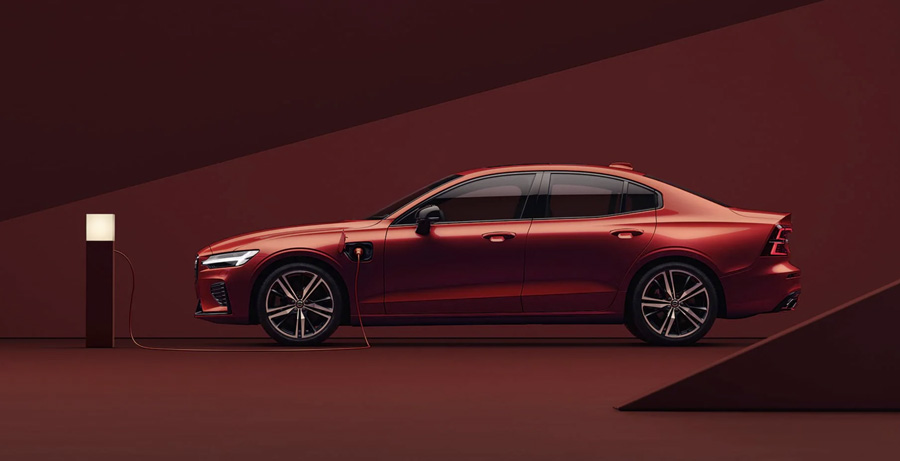 This, of course, represents an even bigger obstacle for manufacturers at the top of the segment, such as Aston Martin, Ferrari, McLaren, or Lamborghini. Even the pre-owned market, which is a big part of this industry segment and one that many new owners approach first is not a viable option due to even higher tariffs. Since they can only resort to importing, potential opportunities lie in the Government's decision-making first, and then in the EV market development that is arriving later in this segment anyway.

Ultimately in fact, even if the economic growth will continue as it did so far (except for these two years of pandemic), it will be up to the Government to stimulate the sector development in the right way, attracting investments and favouring a healthy competition.