Ahead of the 2022 season, which will bring significant changes to the rules, Formula 1 reaches half of its longest season with 23 races initially planned.

Thanks to an agreement between the owner Liberty Media and the FIA, the sport has recently changed its rules introducing the budget cap of $145 million that was teased for a while. Its introduction initially thought to be gradual was accelerated due to the pandemic impact. Furthermore, the current limit should receive more gradual cuts in the next two years.

Teams over the years have applied different strategies and business models to ensure their survival and thrive in the most technologically advanced sport of all. This might seem a fairly straightforward task for larger teams owned by big automotive manufacturers, especially after the budget cap was introduced to level the playing field. But that is surely not so for smaller, independent teams. So, as the sport became more complex over the years, these firms have used different solutions.

Let’s see what they are and how effective they have been so far.

Naturally, part of the revenues of each team comes from the sport itself in the form of the Concorde Agreement. According to this agreement, every team at the end of a season gets an equal share of the F1 earnings’ percentage, for participating in the two previous seasons. Additionally, another part of the F1 teams’ revenues is calculated according to the ranking order at the end of the season, with the winner taking the largest share and the others getting less at each step of the ranking.

FORMULA 1 PRIZE MONEY SHARE DEPENDING ON THE FINAL CHAMPIONSHIP STANDING (%) 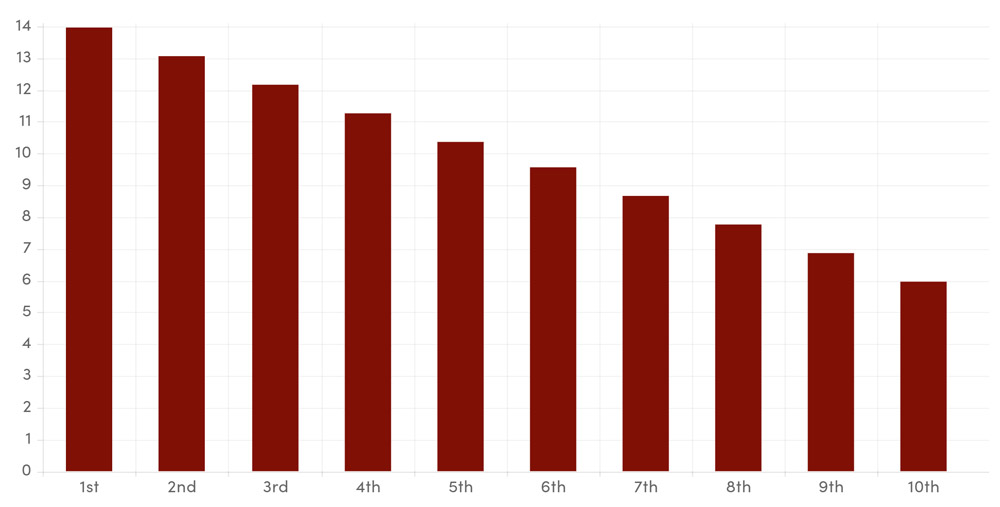 Along with these two shares of the F1 revenues, some teams have access to other money thanks to their status within the sport. While specific details of the agreement are not disclosed, some others have been made public.

According to The Race, Ferrari as the longest-standing F1 team earns an additional share, being the only firm that has taken part in every single season. Its political and marketing influence on the sport is significant. Along with that, with the new rules, teams that have a special heritage in the sport, or have classified among the best three over the past few years, have access to a 20% share of what F1 earns above the $650 million threshold. These teams are Mercedes, Red Bull, McLaren, Williams, Renault (now renamed Alpine), and again Ferrari.

Overall, despite still having larger teams earning significantly more than others, the system should ensure a much fairer distribution.

The second source of income that every team enjoys, even if to a different extent, are the sponsorships. Every team each year receives money from 10 to 20 sponsors that pay money to have their name displayed either as a title partner or simply in different spots on the car. These deals are negotiated individually with the teams depending on the kind of exposure a company is looking for and the time the car is shown on TV or social media (naturally, this again goes in favour of larger and winning teams).

But there is more. 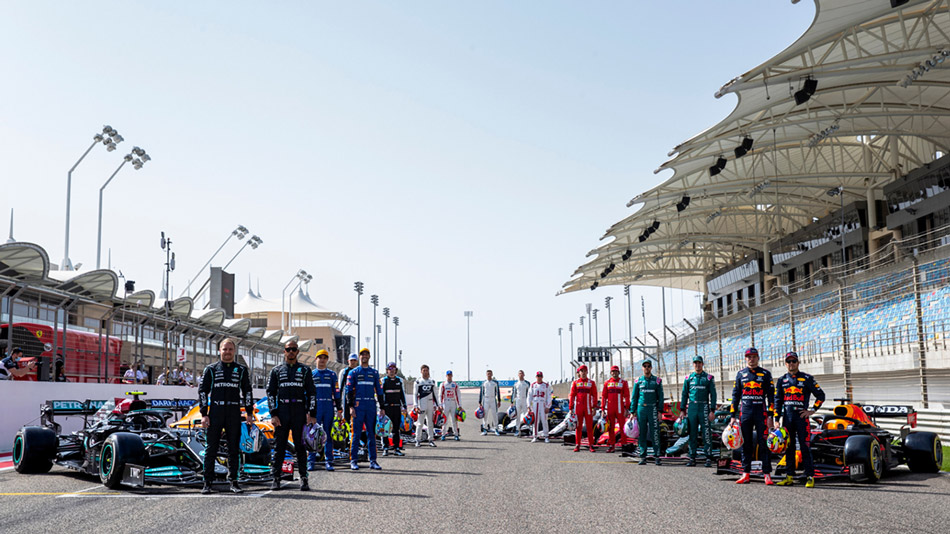 Different teams throughout the years have employed different solutions to improve their businesses and ultimately their competitiveness and income.

The most obvious, at least for automakers, is the technology transfer. For companies such as Ferrari, Mercedes, Alpine, Aston Martin, and McLaren, the Formula 1 team along with being a powerful marketing tool, is also an important platform for technology development to transfer and apply to their respective road-legal vehicles. Especially for luxury performance vehicles, the examples are numerous throughout the years.

The second role that is, once again, applied mostly by automakers and in some cases by larger teams is that of suppliers. The most common component is, of course, the engine. Once again automakers provide engines for their teams, and sometimes also for others. In 2021, Mercedes produces engines for McLaren, Aston Martin, and Williams, while Ferrari does it for Haas and Alfa Romeo. Alpine, naturally uses a Renault engine, which in past seasons supplied them for numerous other teams as well. The last two, Red Bull and Alpha Tauri, instead use Honda engines. Honda is now present only as a supplier, while it participated in the championship too in the past.

However, engines are not the only component that is supplied by big teams in F1. Wealthy firms, even without a proprietary engine, can become suppliers too. Satellite team Alpha Tauri uses chassis parts from Red Bull’s previous cars, even if the rules state that the whole car must be developed by the team itself. Apart from those, brakes, suspensions, fuel system, steering and gearbox are developed with Red Bull Technology.

A third method that some teams use to create an additional income stream is the external technology transfer. Throughout the years, teams such as Williams, McLaren, and Sauber (now called Alfa Romeo Racing), developed technology for third parties that were not even involved in the Formula 1 championship. The innovation produced in this sport has been applied to aerospace, materials engineering, IT, and telecommunications.

Last but not least, there are the driver academies. Over the last two decades, almost all the teams involved in the championship have established their own young drivers’ training programs. 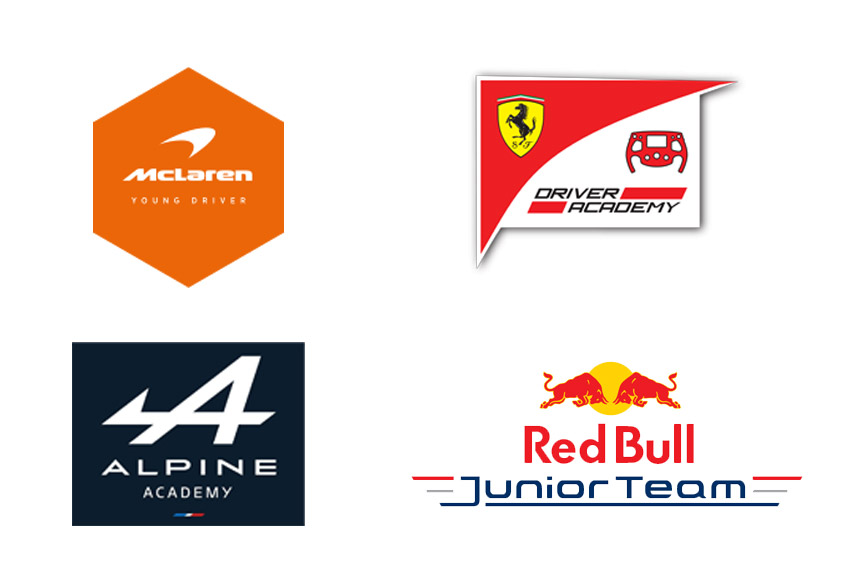 FORMULA 1 DRIVER ACADEMIES, YEAR OF ESTABLISHMENT, AND CURRENT DRIVERS TRAINED IN EACH PROGRAM

This kind of initiative brings several advantages to a team. First, they can get in contact with potential future stars very early on. Then, these drivers can get used to the working environment as well as the technology within the company creating a better synergy.

An interesting research by Aversa et al. (2015) about business models employed by F1 Teams, analysed how the different combinations of activities in a highly technologically advanced environment contributed to high or low business performance.

Through a three-phase framework, and qualitative comparative analysis (QCA) the research, covering the 2005-2013 period, identifies the synergies, and complementarities of different configurations of business models, and ultimately which of these are connected with a specific performance.

The results show how the most common combination of factors connected to high performance is the delivery of supplies to other teams paired with the talent development program. Different from the Internal technology transfer, directed at a different unit, and the external technology transfer, directed at third parties operating in different industries, the other two models both contribute to an F1 team core activity: racing. So, both these activities have capability-enhancing complementarities.

The supplier activity allows teams to test their components and get data related from more cars at once, instead of just two. This translates into an invaluable testing knowledge and data resource that are highly limited by today’s regulations. At the same time, the talent development programs give more control over the potential future team, along with the benefits mentioned earlier. Financially speaking, the paper highlights how, often, academy drivers tend to accept contracts with lower salaries by their teams. Finally, in case a driver is transferred or loaned to another team, the academy owner gains from the process, and if it works as a supplier as well it can also sell a bundle.

Finally, the research finds evidence of how these two business models are often connected with high performance, while the same cannot be said for the others, bringing the examples of the decline of both McLaren and Williams in the 2005-2013 period. The technology transfer, instead of a capability enhancement, in the majority of cases, brings financial advantages.

The evidence found by the research, despite a few exceptions, is consistent with the current results too over the last six years. 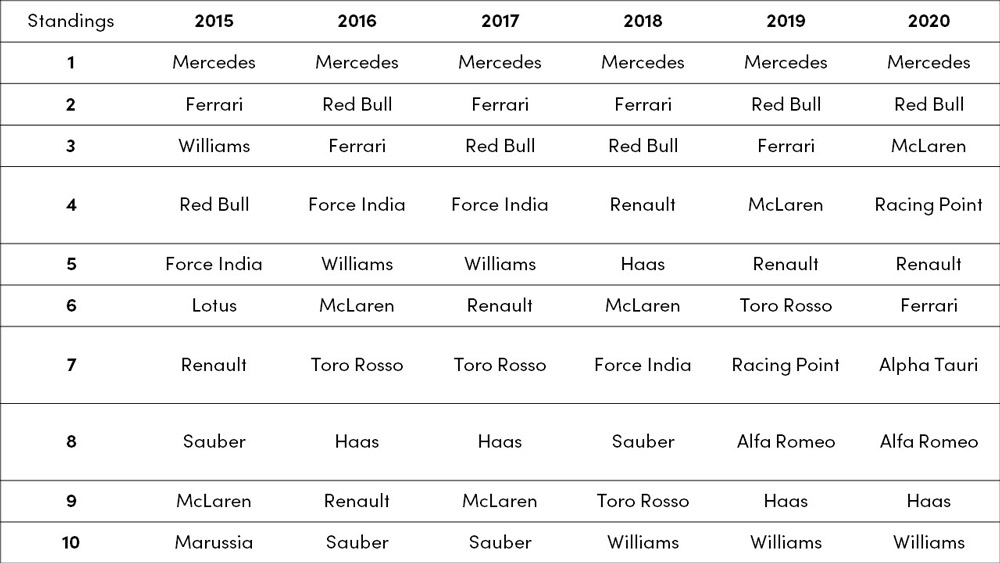 The evidence is supported by the fact that over the last two years even minor teams like Alfa Romeo (Sauber) and Williams created their own driver academy, likely looking to close the gap creating that unique synergy with future drivers.

Overall, there are many factors that can contribute to the success of an F1 team, and even luck might not be the last of them, especially when rules changes are involved. The current landscape is shaped by automotive companies, satellite teams, and a few independent ones. Future regulations should level the playing field giving more unpredictability to the championship and more opportunities to smaller teams. As shown by Aversa et al. (2015) research, the employment of specific activities not applicable by all gives a consistent competitive advantage to certain teams. However, some are trying to close the gap by expanding and refocusing their activities. And this with the new regulations could bring a real opportunity.