Last weekend at Ferrari’s Finali Mondiali held at Mugello Circuit in Tuscany, the company presented the highly anticipated new entry in the Icona Series started back in 2018 with the presentation of the Monza SP1 and SP2. This time made its first appearance on stage (and on track) the Daytona SP3.

Back in October 2018, Ferrari introduced the new Icona Series Concept as tapping into “a leitmotif of the most evocative cars in the company’s history to create a new segment of special limited series cars for clients and collectors. The intention is to use a modern aesthetic to reinterpret a timeless style, with technologically advanced components and the highest performance possible through continuous innovation”

So, whereas the Monza SP1 and SP2 modernised the concept of speedster, or barchetta in Italian, taking inspiration from (iconic) models such as the 166 MM, 750 Monza, and 860 Monza, which also inspired the name of the model itself, the Daytona SP3 draws design cues from legendary Ferraris sports prototypes, such as 330 P3/P4, 350 Can-Am, 512 S, and Dino 206 S.

In an Interview with Motor1, Ferrari Chief Design Officer Flavio Manzoni, with regards to this project, says:

“This wasn’t a simple retro-design project based on a single model. The thing we were most passionate about was the evocative concept of a Sports Prototype […] The Sports Prototypes were designed for the track, but at the same time they were extremely beautiful, proper sculptures, very sinuous and powerful.

We were inspired by this evocative power, but we projected these stylistic cues into the future”

But what else is there for the Daytona SP3? And what does this model mean in the context of the luxury performance automotive niche?

The name, like the car, takes inspiration from the events that happened at the Daytona 24 Hours of 1967 where Ferrari took the first 3 places with 330 P3/P4, 330 P4, and 412 P. These were also the cars that influenced the 1968 Ferrari 250 P5 Berlinetta Speciale shape (visible especially in the Daytona SP3 rear) later used for the Alfa Romeo 33 Speciale and inspired the commission of the 2006 one-off Ferrari P4/5. Both were designed by Pininfarina and confirmed the fascination for those historic models. 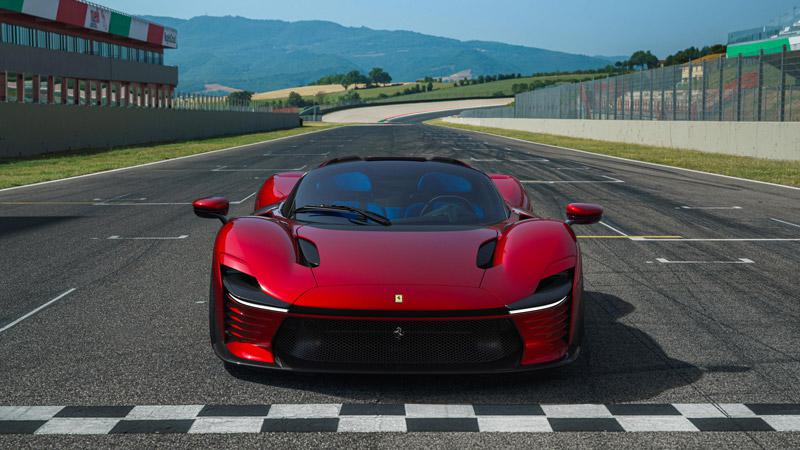 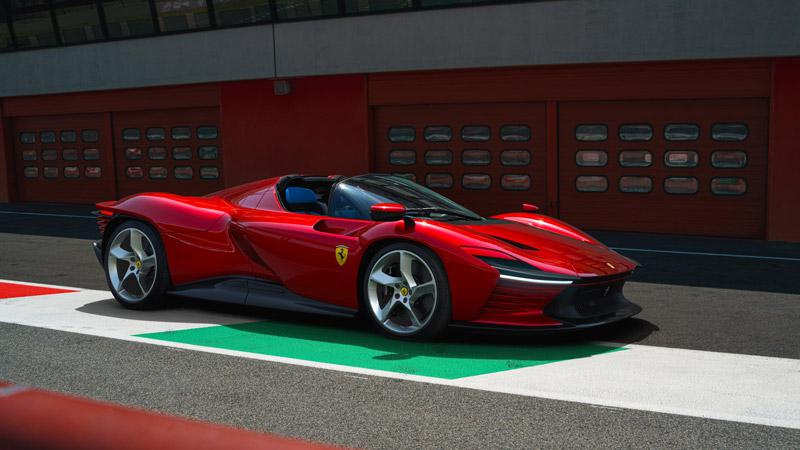 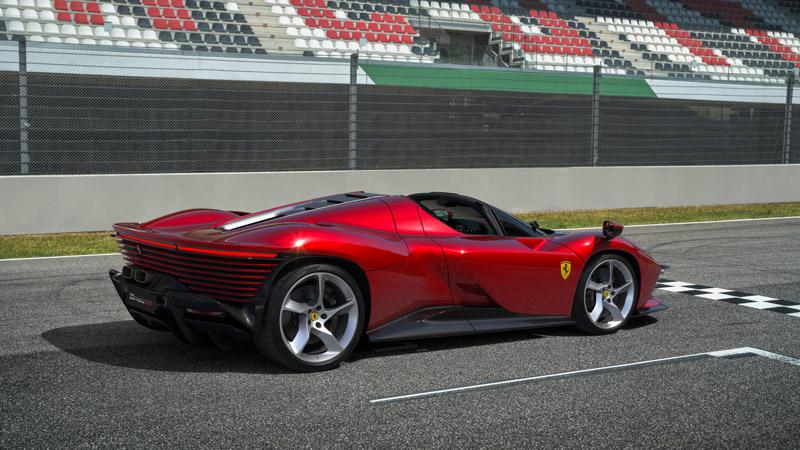 The car preserves the targa top of some of these models as well. The powertrain too celebrates that heritage. The Daytona SP3 features, in fact, the rear-mounted naturally-aspirated 6.5 litres V12 seen recently in the 812 Competizione, but tuned here to produce 840 cv (829 hp), 697 Nm of torque, and revs up to 9500 rpm. The chassis is derived from the LaFerrari, but no hybrid or electrical components have been added.

The driving position is also reminiscent of those racing cars, with seats completely integrated into the tub and the pedals board sliding to adjust to the perfect position. Several innovative aerodynamics solutions allowed the design to remain as clean and streamlined as possible while also being enriched by details such as mobile panels recalling classic supercars’ pop-up headlights. 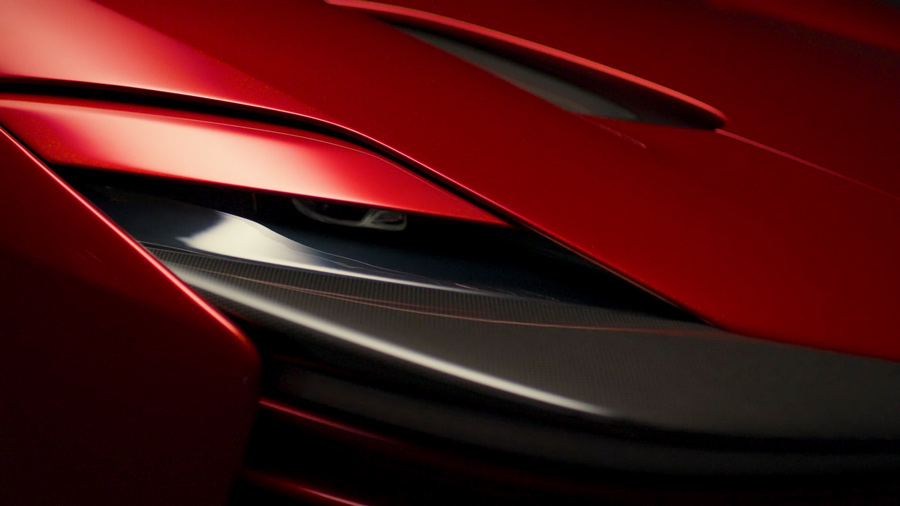 The final result anyway is as futuristic as possible. From the overall exterior sculpture to the interior featuring every bit of engineering and digital technology seen in the latest Ferrari models.

To different extents and with different levels of success, the celebration of automotive heritage through special limited-edition models has become an important component of the brand strategy for several companies in the luxury performance market segment. Both because it enhances brand equity and it is the one characteristic that cannot be replicated in any way by any of the numerous new players entering the market helped by the electric technology that significantly lowered certain entry barriers.

The examples are a lot and in pretty much every competing company that can ‘afford’ such strategy.

There have been a few examples of this strategy in the past like the aforementioned 2006 P4/5, or sometimes just produced as a concept like the Lamborghini Miura Concept designed the same year by Walter De Silva.

In just the last five years though, there has been an increasing number of releases of such vehicles. Much like it is happening for the One-off trend, this is also about strengthening the brand and offering a rarer product and a more unique customer experience. In some cases, the two even coincided. Like for Aston Martin’s Victor, which is a one-off but also an explicit celebration of its 70s and 80s ‘British Musclecar’ phase with the Vantage. 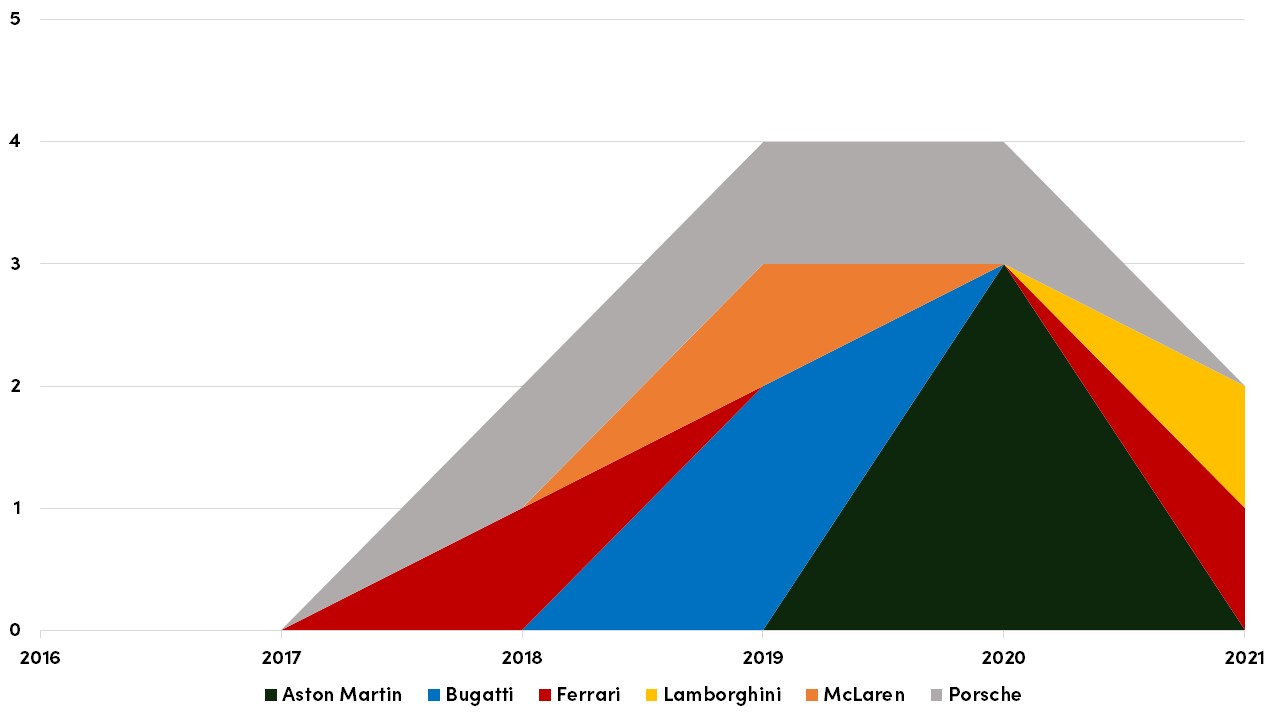 Heritage and branding are some of the most important factors in the modern luxury automotive company strategy as seen a few times before. For this reason, throughout the years, strategies have always been carefully crafted around them, but this is important today more than ever before.

The increasing number of these models directly inspired by the companies history suggests an ever stronger interest in rare and highly customisable vehicles, as well as the will to feel a sense of belonging to a brand. Additionally, they bring various advantages to the manufacturers.

First, they represent an important resource for the OEMs because they offer an opportunity to set themselves apart from any new competitor, and also a great resource to reinforce brand identity and develop new projects.

Ferrari itself has been applying a similar formula to its production models. The last two entries in the line-up, Roma and 296 GTB incorporate clear design cues from the companies history. The first takes inspiration from the 50s and 60s GTs, such as 250 GT, and GTB/4 (Daytona), while the second recalls models like the 250 LM but also some 80s cars especially in the rear.

Second, margins also will naturally be much higher. Most of the time, these limited editions sell between €1 and €2 million. Some for a lot more, like in the case of Bugatti (around £10 million and much more for the one-off). A  few, like the two Heritage Edition Porsches for a lot less. But considering the average lower prices Porsche charges compared to its competitors, and the higher production numbers of the two models, they too sell at a significant premium between £25,000 and £30,000.

Going back to the Daytona SP3, by looking at the numbers in the last few years, it is evident how Ferrari’s stronger reputation and customer loyalty are making the difference when it comes to limited editions. Except for Porsche that sells in a different price bracket, all the other heritage models are produced in much smaller numbers.

Clients are approached way early in the process, and the cars are (most of the time) all sold out by the time of the unveiling. Manufacturers are able to plan these numbers to make sure the car sells out, and Ferrari in the “speedsters run” delivered 499 Monza, while Aston Martin limited the V12 Speedster to just 88 models and McLaren slashed the production number twice. This number was most likely even less than what it could have been because the car without a windshield is not homologated for road use in the US and Asia. The Daytona SP3, in fact, is set for a production of 599 units.

The fact that just these two models selling for over €2 million each total a production of almost 1,100 units is remarkable, and it is something that no other company in this market is managing to achieve. The Daytona SP3 represents another success in the celebration of one of the strongest brands in the world, and one that will fortify its position even more.