In today’s luxury automotive sector Porsche is one of the most influential and successful brands on the market. This is due to its long history of excellence, its achievements in motorsport, and the overall status that the brand has reached.

But there is more to it. On the marketing side, in the last 30 years, the company and its decision-makers’ ability to anticipate and likely influence massively important trends are not only what saved it in the 90s, but what pushed it even further to become the powerhouse it is today.

Naturally, these trends have come in many forms. Starting from the idea of a small more approachable and daily driveable vehicle such as Boxster, to the bold approach to the gaming industry, and now by being ahead of the curve with the EV development while investing in E-Fuels as well.

The other tool that is supporting Porsche’s popularity and the focus of today’s marketing presence is Social Media. So, how does Porsche fare against its competitors on social media? And what are the main characteristics of its social media strategy?

The market of social media at the top is mostly unvaried from my previous analysis with, in order, Facebook, YouTube, WeChat/Weixin, and Instagram leading the way. All with at least 1 billion active users and the top two reaching 2.7 and 2 billion.

What makes the news these days is definitely TikTok, the app from the Chinese ByteDance. The numbers are impressive. In 2019 the number of downloads globally reached 738 million, with a spending of $50.4 million (£37.01 million) (Statista). In its largest market for IOS, the US, the app has grown by almost 800% since 2018, reaching around 100 million monthly users and 50 million daily (CNBC). The rest of the world has seen similar growth. The demographic though remains largely young or very young. 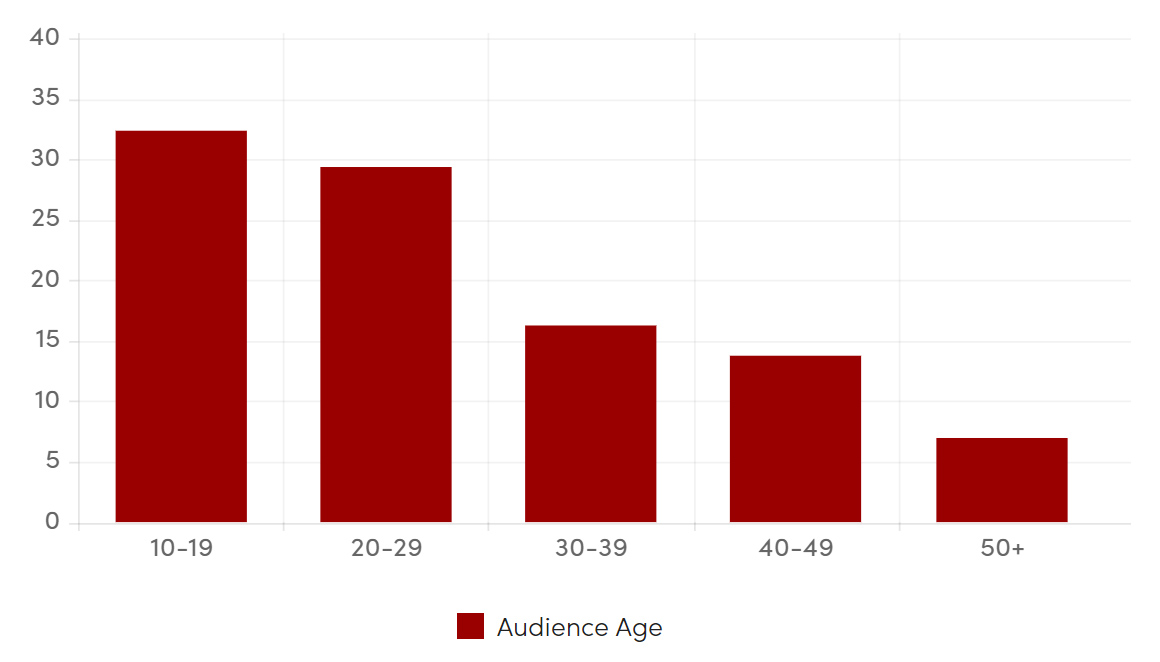 This data, along with controversies and security concerns surrounding TikTok, despite indicating the presence of a sizable audience even in higher age brackets, is likely one of the factors that stopped many automakers in the luxury niche from entering the app.

These numbers did not go unnoticed anyway as Instagram, as it did before with Snapchat and the Stories, just rolled out a new feature. The Reels. These 15-30 second full-screen swipeable videos are pretty much an exact copy of what TikTok is all about. While this worked before, it still remains to be seen if Facebook through its “younger” Instagram will manage again to pull this off.

HOW IS THE COMPETITION ON SOCIAL MEDIA?

Below are the graphs that show the following and engagement for all the major companies in the luxury and luxury performance market niche. 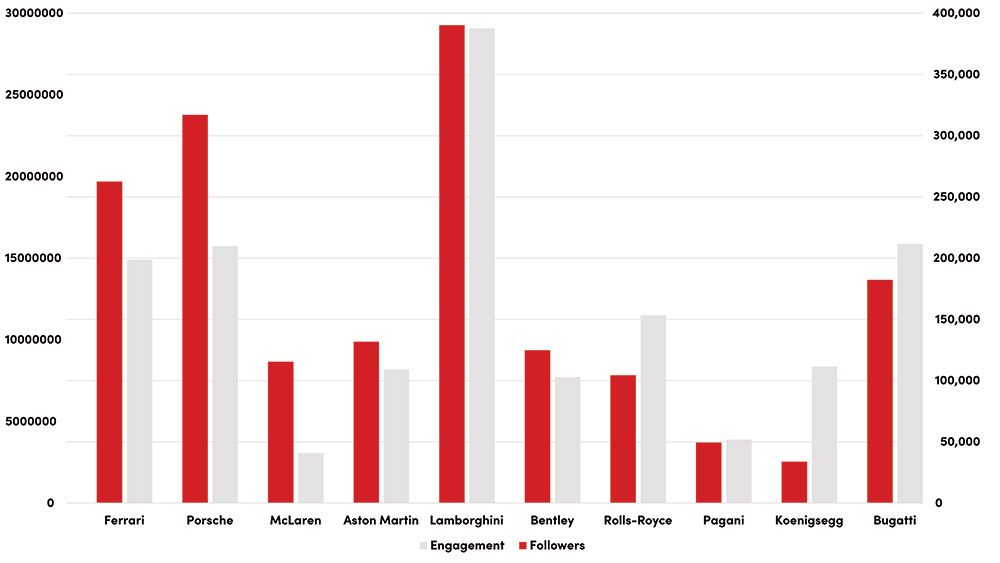 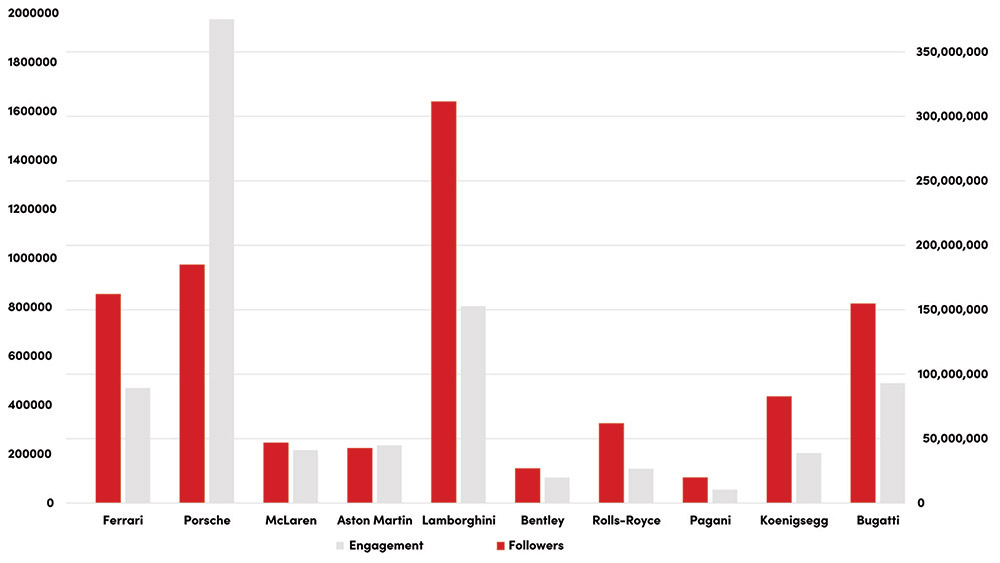 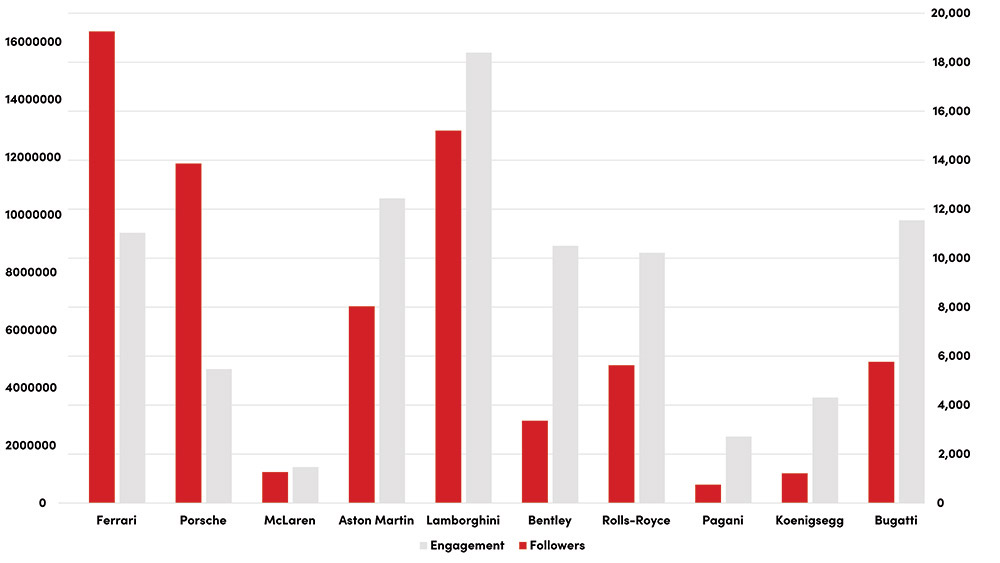 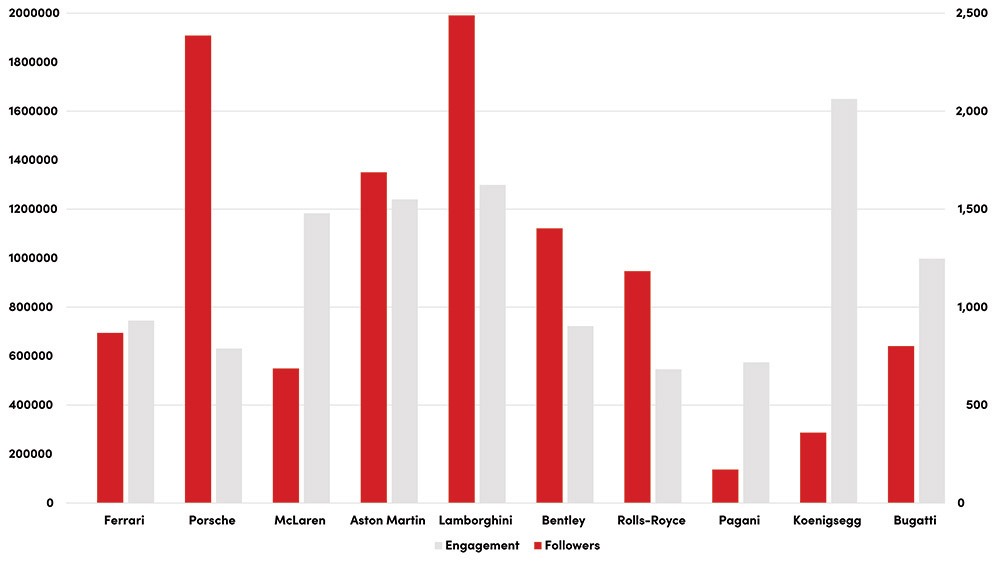 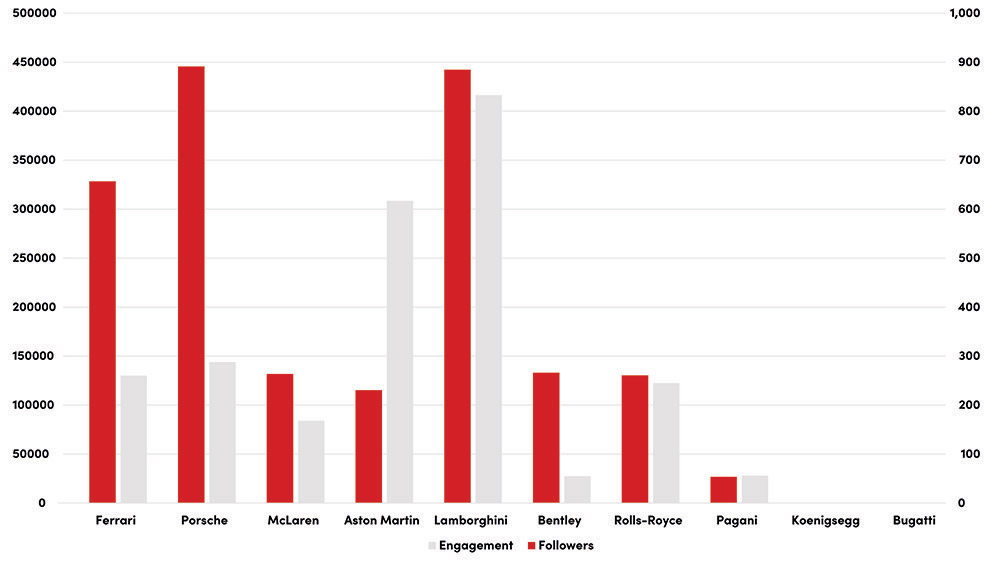 It must be noted that especially when it comes to engagement data, the results can be affected by the specific time of the year, such as this one which includes the holiday period.

Nonetheless, if compared with the graphs reported in my previous Social Media Analysis from March, some interesting insights emerge. First the growth difference between platforms. Facebook for example presents an average following growth of 1.4% in almost 1 year, while YouTube and Instagram have grown on average by 16.8% and 10.5% respectively. The growth on LinkedIn reaches a shocking 48.7% on average. Of course, the absolute numbers have to be taken into account. Numbers on LinkedIn for instance are massively inferior to those on Instagram, which makes a 10.5% audience increase even more impressive.

The balance in the competition remains mainly unchanged on platforms with “clear winners”, but overall, brands such as Aston Martin that so far had a smaller following are closing the gap.

So, what about Porsche?

Porsche maintains a consistent presence on all the major social media platforms, leading the way on several of them or being a close second. But let’s go a bit more into details.

As mentioned at the beginning of the article, Porsche looks to be always two steps ahead of the rest, setting trends instead of chasing them. One way to do that, in this case, is gaining exposure with the right demographic. A young one that will eventually grow up becoming a future potential customer base. As it happened with motorsport gaming before. Right now, the two platforms to achieve that are definitely Instagram and TikTok.

Since March, in fact, Porsche’s largest following increase, except for LinkedIn where the company page has just exceeded half a million, is on Instagram. Its Instagram profile has grown by 15.5%, so way above the average, and topped only by Koenigsegg with +21.8% which anyway started too from a much lower basis.

Secondly, Porsche is the second company of the ones analysed here to join TikTok. With the other, arguably not casually, from the VW Group too. Lamborghini opened an official account on October 30th, 2020, and Porsche entering too on November 16th.

On most platforms, posting frequency does not have statistical significance in relation to engagement or following. For YouTube though, where Porsche does not have the biggest channel but has by far the highest number of videos, a linear regression shows a strong positive correlation between content published and engagement. 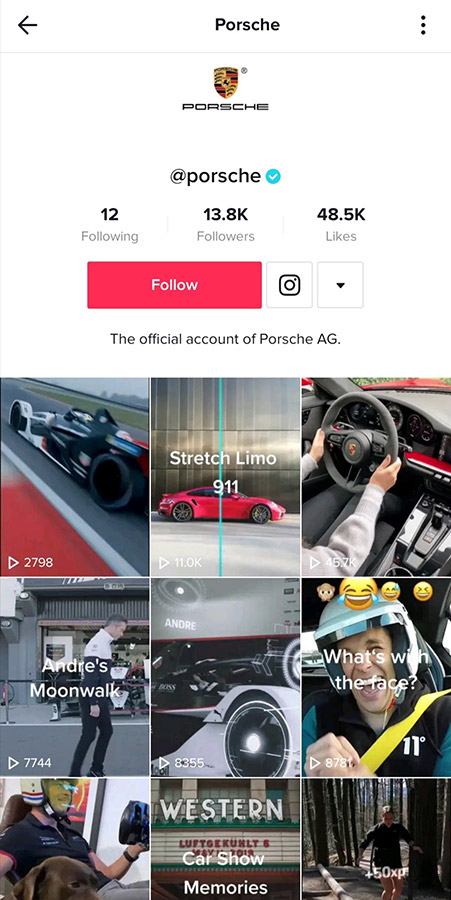 Finally, in terms of content, Porsche's recipe for success is a unique mix of Storytelling, motorsport, ranging from GT Endurance Competitions to LMP Competitions, Clients’ Racing, automotive heritage, Formula E, and, of course, Electrification, whose popularity is growing massively today. This is properly developed tuning the message and the delivery according to each platforms’ characteristics. 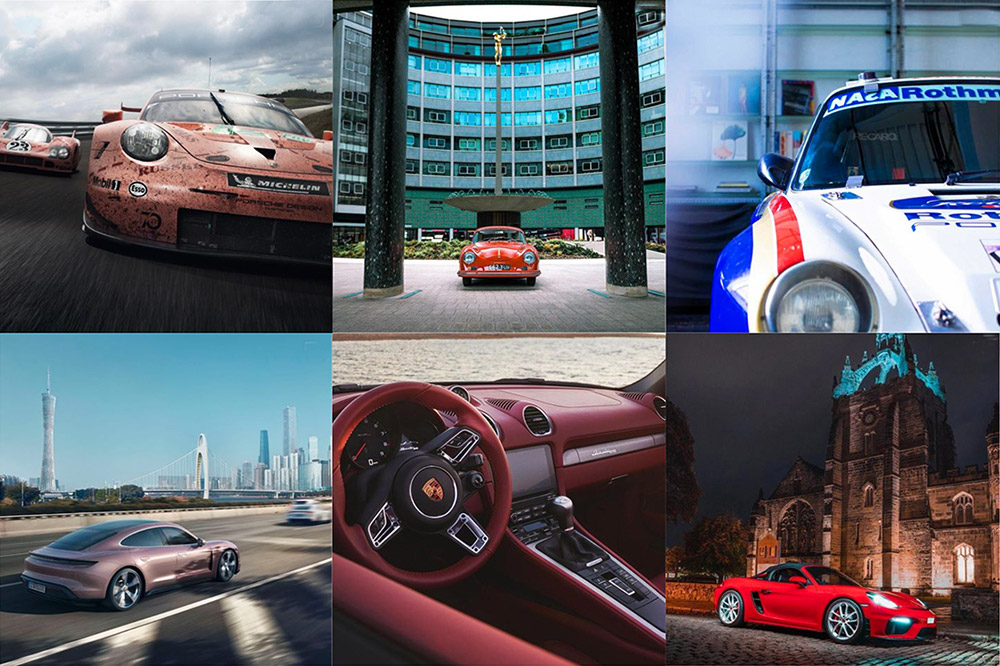 Additionally, a relevant factor is the positive coverage the brand receives from third parties and motor journalists. Started in 2013 with the 918 Spyder and continuing today with records and big achievements. Whether is some good review from Top Gear’s Chris Harris, the outstanding series of drag-race records on Carwow (one of the largest automotive-related channels on YouTube), or praise coming from other online personalities. It all contributes to strengthening the brand reputation as one of the top performers in the world and constantly at the top of the game.

Porsche enjoys the fruits of bold steps taken in these last 30 years and that continues to take today. And it does that while celebrating its long history, not only through its iconic design, that with 911 is arguably the most consistent in the industry, but also through a constant marketing work. It is evident also the focus on a younger audience and fast-growing platforms, which often coincide. This translates into Porsche’s constant presence on Instagram, LinkedIn, and YouTube, as well as the recent entry on TikTok.

This daring and forward-looking strategy gave it a competitive advantage that is well reflected in its social media presence, and that no one else can quite match. Taycan and its upcoming siblings are only the last ones on a long list, so far.