How VW turned Lamborghini into the success it is today?

Lamborghini today is a strong and fast-growing company. In the last two years, its already growing sales have literally skyrocketed as the firm took advantage of the SUV craze that dominates every segment of the automotive market.

*2011-2018 - the numbers reported refer actual sales, not car deliveries, except for 2019 as the full-year annual report has not been published yet

Many automotive enthusiasts though also know that Lamborghini has a troubled history. After its initial fame sprang from the international success of the Miura, the majority stake was sold by Ferruccio in a moment of crisis in 1973. After this first sale, in around 20 years the company changed owners three more times up until 1998 when it was finally acquired by Volkswagen and placed under the Audi group.

From then on, the automaker started growing more and more steadily, affirming itself as one of the most iconic brands in the luxury performance segment. Despite being a low-volume manufacturer, it remains at the bleeding edge of performance and technological innovation.

HOW DID VW TURN THIS STRUGGLING COMPANY INTO THE SUCCESS IT IS TODAY? WHO WERE THE ARCHITECTS OF SUCH ACHIEVEMENT AND WHAT STRATEGY DID THEY ADOPT?

In 1993, Volkswagen Group Chairman and CEO Ferdinand Karl Piëch entered a company in serious financial distress. He was one of the main figures behind VW resurgence thanks to its aggressive international expansion strategy. He was also the decision-maker behind VW Group acquisition spree of 1998.

Investing a sum around today’s €2 billion (adjusted for inflation) in a single year, the German manufacturer acquired Rolls-Royce/Bentley (that was later split with BMW taking the rights on the Rolls-Royce brand), Bugatti, the engine manufacturer Cosworth and of course, Automobili Lamborghini.

The main reasons behind this strategy were consolidation, with wider market coverage, and Research & Development.

Along with VW AG’s then Finance chief and strategist Jens Neumann, the expansion plan served as diversification within the mobility sector. The interest was not diversifying for resilience purposes but covering as many market segments as possible to satisfy the highest number of customers. 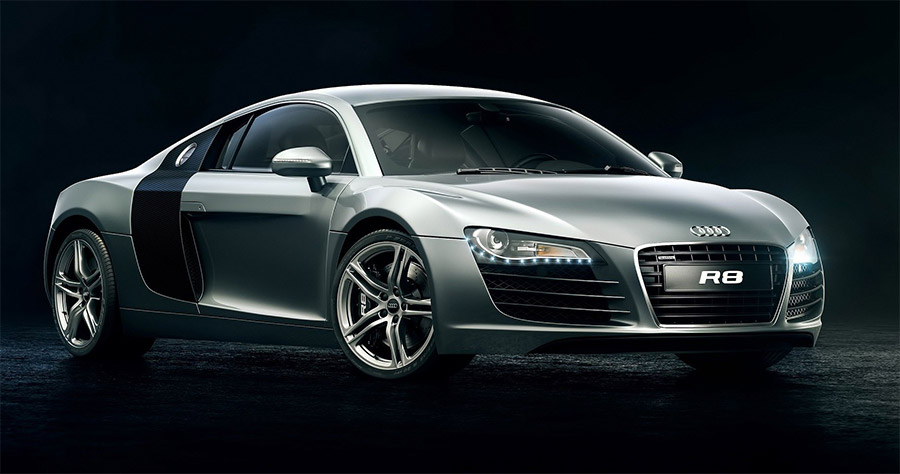 Also, the luxury and design expertise, as well as the technological know-how gained with these acquisitions, have been a huge contributor to VW’s strategy. To vitalise its product lineup and get Audi to compete in the same segment of BMW and Mercedes. That year two major additions were the new Beetle, showing a renewed, fresh design language, and the Audi TT premium yet sporty. The knowledge transfer became even more evident in the mid-2000s with the R8 which was taken straight from the Gallardo platform before, and from the Huracán later.

In a really concentrated industry, Piëch knew where to invest, even more considering his previous experience in the sports car segment with Porsche.

WHERE DID LAMBORGHINI START UNDER THE NEW MANAGEMENT?

The first new Lamborghini release under the Audi ownership was the Murciélago, with project manager Maurizio Reggiani and CEO Giuseppe Greco. Launched in 2001, in its first full year increased Lamborghini’s sales by 42%, with 442 units sold. Up until then, with the Diablo, annual sales were around 200 vehicles per year, but the model had already been around for over a decade. Murciélago was overall a big success for the company selling 4099 cars in a decade. The previous flagship, Diablo, reached only 2884 and the Countach before 2049. 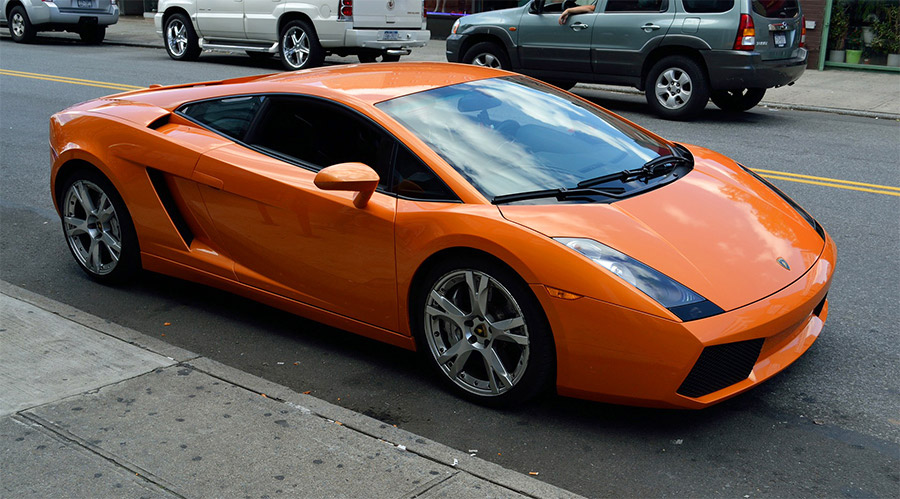 In an economy affected by the 2000s economic recession, Murciélago’s success was mainly due to improvements in its daily usability. Even today, car enthusiasts don’t appreciate much this performance ‘democratisation’ that for many took away Lamborghini’s true Italian soul. Murciélago was developed to offer improved performance, over its predecessor, but in a more sensible way. Reliability, practicality, dynamics, and drivability were the main differences. This philosophy gave Lamborghini access to a broader customer base.

The same concept was later adopted for the development of Lamborghini’s real game-changer: The Gallardo.

Audi was not the first to envision the little, more affordable Lamborghini destined for a wider market. This path was taken three times before, with the Urraco, the Silhouette, and the Jalpa. 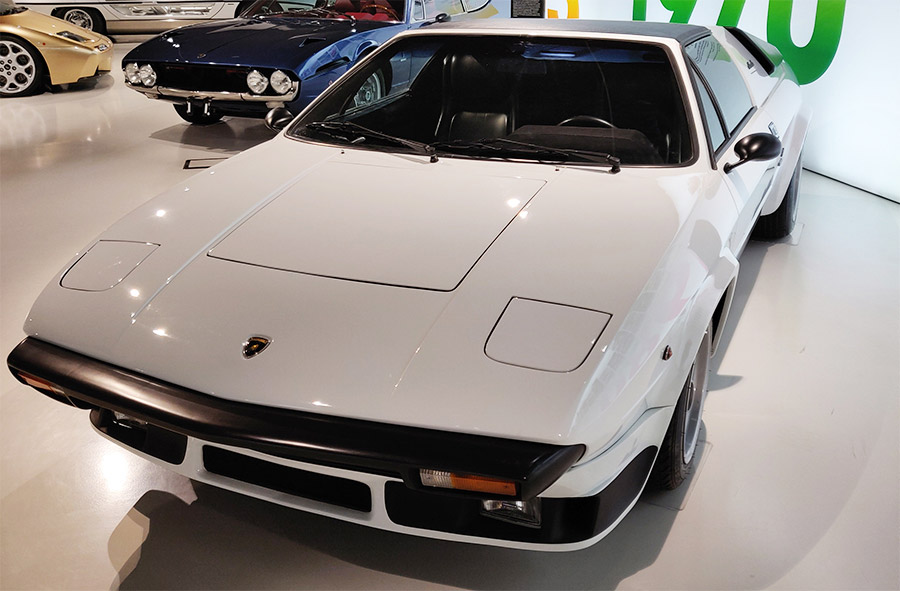 *Lamborghini Silhouette from which the Jalpa was developed

While the first was a good success, the second had just a short production run. The Jalpa seemed the car with all the requisites to be the big hit the then-owners Mimrans were hoping for. But a combination of factors hindered its success. Differently from its flagship sister, the Jalpa looks, still designed by Bertone, was not as outstanding and attractive for the average Lamborghini clientele.

Also, the car felt heavy even with its small size, and to top it all comfort was below the expected standard and some components had reliability issues.

Finally, an external factor that made the situation even more complicated was the fierce competition in the industry. Lamborghini’s main competitors at that time, Porsche and Ferrari, over the same period from the mid-70s to late 80s reached huge success with their respective models Porsche 911 Turbo (930) and Ferraris 308 and 328 producing around 20,000 units each.

A little later, it was Porsche also, that in the 90s on the brink of bankruptcy saved the day through the same formula. It is called Boxster and it was a huge hit right from the start. Naturally, the price was much lower than the Lamborghini’s that followed a few years later.

So, despite the failed attempt in the past, Audi decided to stick with the idea of a ‘Baby-Lamborghini’. The plan was developed in a more efficient way, thanks to Audi and VW’s market trends knowledge and expertise in sales which was a clear competitive advantage over smaller low-volume manufacturers.

The car was, of course, smaller in size and engine compared to the Murciélago. Only 4.3 metres long, 1.9 wide, and equipped with 5 litres V10 engine (5.2 litres for later versions). 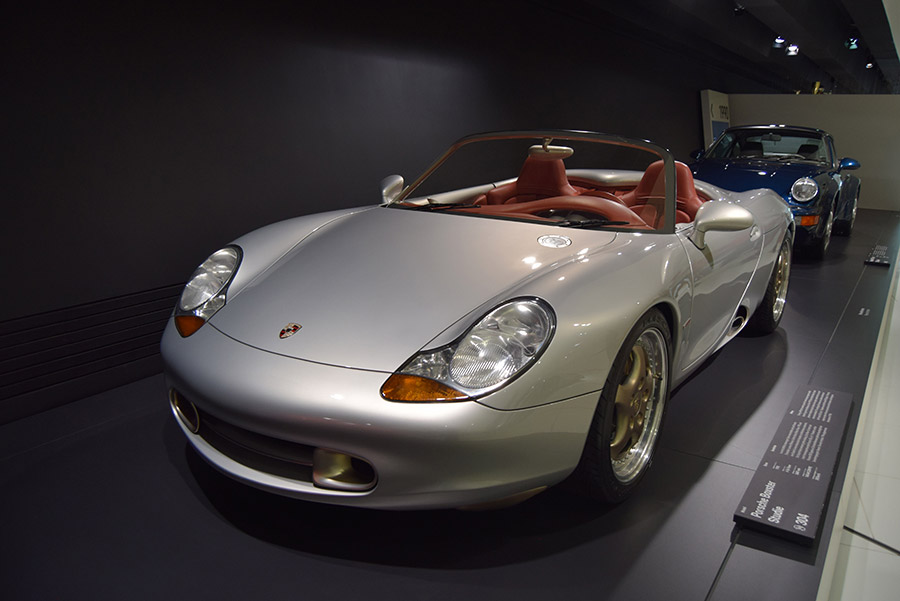 *1993 Porsche Boxster Concept. It was the basis for the 1996 production model

It was more affordable around £50,000 less than the big sister in the UK, below £150,000. Under Audi’s supervision the final product was also more reliable and easier to drive, but still with a distinctive styling. These factors made Gallardo a huge success. In the first year, it sold an unprecedented 829 units for a total of 1,251 overall. The trend remained positive throughout the 2000s except for 2009 and 2010, where sales halved following the financial crisis.

Gallardo, anyway, went soon on to become the best-selling model of the Bull’s house, with 14,022 cars sold. The substitute, Huracán, in only 6 full years of production is likely to surpass this record (13,313 sold until 2018). The flagship V12 Aventador is already the best-seller of its line as well too.

Audi, in fact, created a perfect synergy. A strong and established design language, high performance and innovation are supplied with state-of-the-art technology and electronics which are some of the most difficult components for a small manufacturer to develop. To this, it has added also the ‘common sense’ of a mass manufacturer when it comes to drivability and everyday practicality.

WHAT ELSE DID LAMBORGHINI’S NEW MARKETING MIX INCLUDE?

Along with the core products and exclusive events, in recent years, numerous initiatives contributed to shaping the brand to what it is today.

From 2008, under Stephan Winkelmann and later with current CEO Stefano Domenicali, six different projects of limited editions or one-offs have been released. Reventón, Sesto Elemento, Centenario, Veneno, SC18 Alston, and Sián. Along with these, concepts like Asterion, Egoista, and Terzo Millennio. All these vehicles are powerful statements of technological and performance innovation. 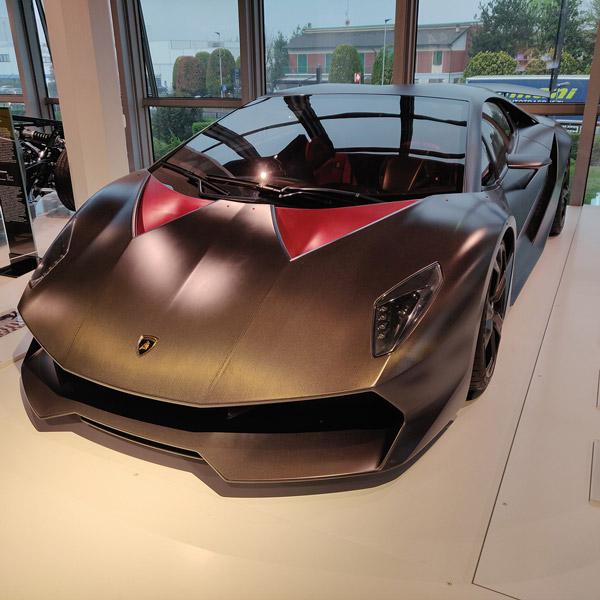 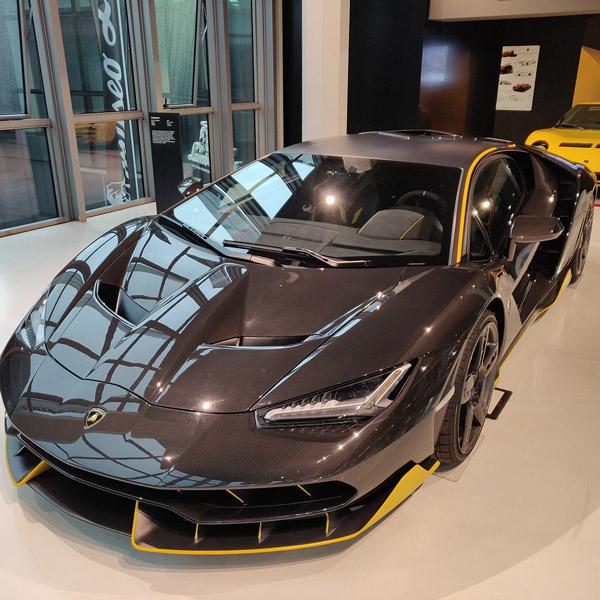 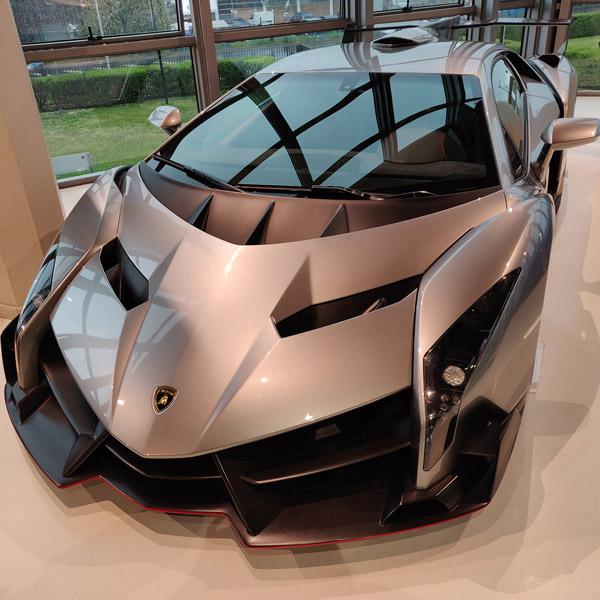 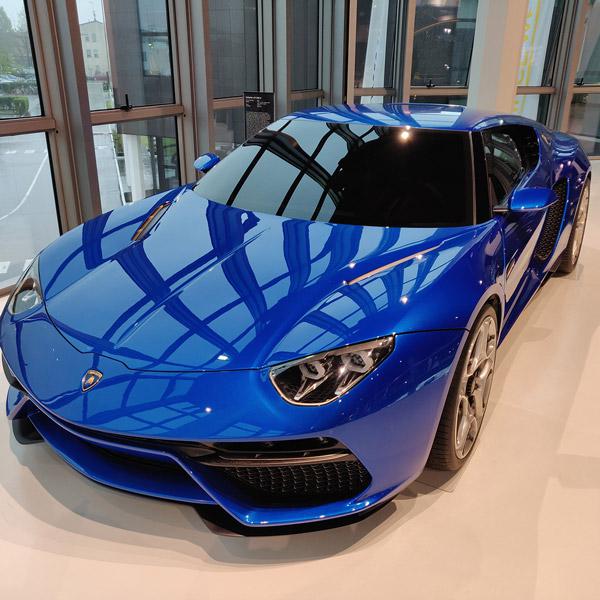 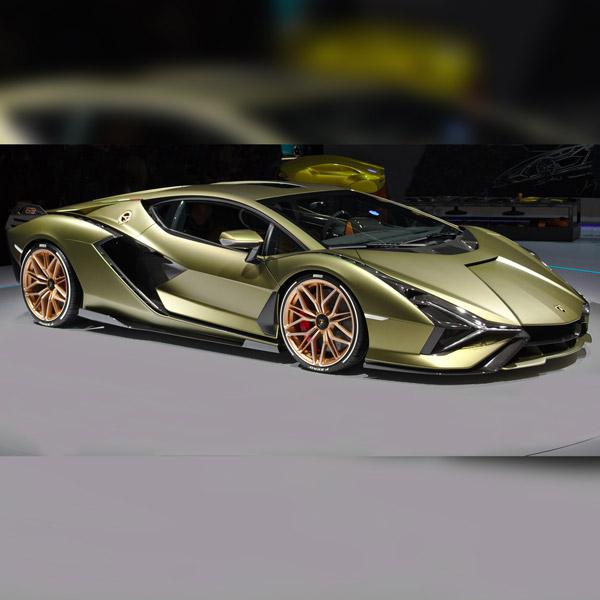 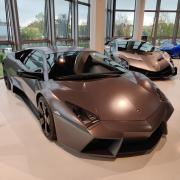 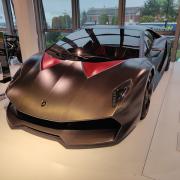 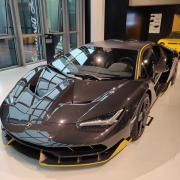 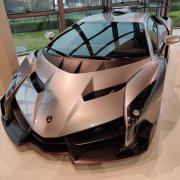 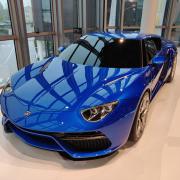 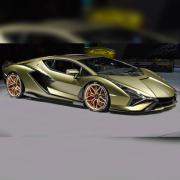 *Some limited editions and concepts developed from the late 2000s at Lamborghini. From left to right in the gallery: Reventón, Sesto Elemento, Centenario, Veneno, Sián, Asterion.

A major strategic effort has been establishing Lamborghini’s presence in the Motorsport world. From the late 2000s, the newly founded Squadra Corse (Racing Team in Italian) overtook the management of all the motorsport activities, from the GT3 to the Lamborghini Blancpain Super Trofeo Championship. To the monomarque championship followed track-only versions of Gallardo first and Huracán after. Part of this plan regards also the road cars division, where Huracán Performante and Aventador SVJ (who took the record for the fastest lap at the Nürburgring Nordschleife for road-legal cars with 6:44.97) have been strongly (and successfully) advertised as cars developed to perform better than any competitors on the track. The successes of these models improved the reputation of the company beyond the recognition for the flashy looks and exclusivity of their cars. They made Lamborghini a serious competitor in its niche.

Also, since the early 2000s, there was a consistent presence of the brand in important videogames, which left a lasting impression on a generation that has now grown up and counts numerous enthusiasts and potential buyers.

High-end merchandise has further expanded the products offering. Collaborations with lifestyle brands like Oppo with the Find X phone and important personalities such as star chef Carlo Cracco in 2011 further contributed to the Lamborghini’s marketing mix.

VW Group is well-positioned in today’s market, with almost 11 million vehicles sold in 2019 but also for its strong commitment to technological innovation and electrification which affects Audi Group as well. This ensures a low-volume manufacturer such as Lamborghini to remain ahead of the changes with resources and up-to-date supplies.

Since 2010, the market has experienced unprecedented growth. But even now, in a slowing automotive market, Lamborghini’s strategy is working. The timing in releasing new models, as well as its improving reputation seem flawless. With the exception of Porsche, which came first both on an entry-level car and on the SUV market, Lamborghini itself has set the trend since the 2000s. Others like Ferrari followed releasing the Gallardo competitor California in 2009 at a similar price and lower than the mid-engine 458 Italia. Its outstanding success confirms Audi Group’s decision-makers’ ability in understanding this market and the likelihood of a continued positive trend, at least in the near future.