“The new era has officially begun” reads Aston Martin's announcement of its Formula 1 Team Title Sponsor Cognizant, a provider of digital products and services. The new partner will not just have a sponsorship role, but actively contribute to the F1 Team infrastructure development. 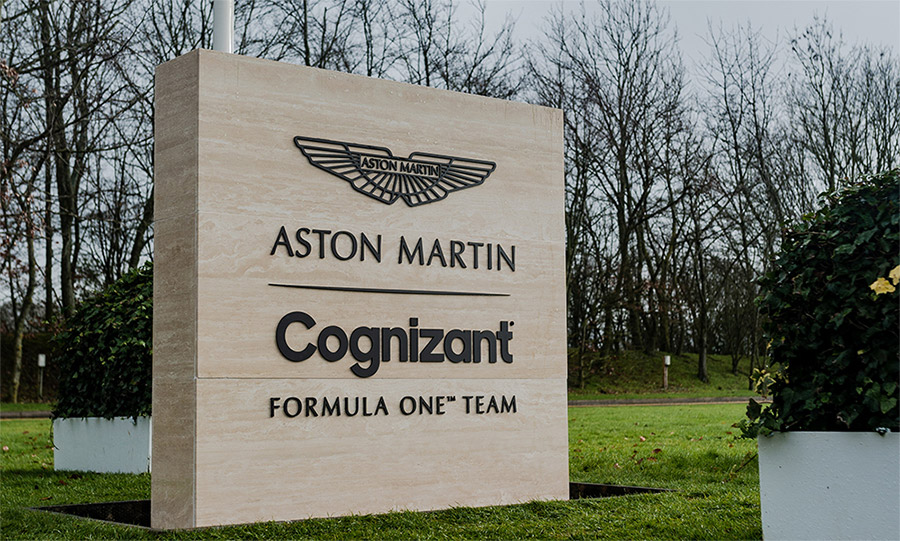 This comes just a few weeks after the Social Media Rebranding and the announcement of the departure from the WEC GTE Pro class.

From a marketing standpoint, the decision clearly makes a lot of sense, and the results are already showing. But let’s see how and why.

LET’S BACK UP A BIT

The news of Lawrence Stroll rebranding his team Racing Point as Aston Martin was announced even before the start of the 2020 Formula 1 season.

Since then, the new drivers’ line-up has been confirmed. The addition of 4-time World Champion Sebastian Vettel is a huge contributor to the general buzz around the team. As one of the most experienced drivers on the grid and a highly respected personality in and out of the track, his new start will be one of the most closely followed as the new season starts. 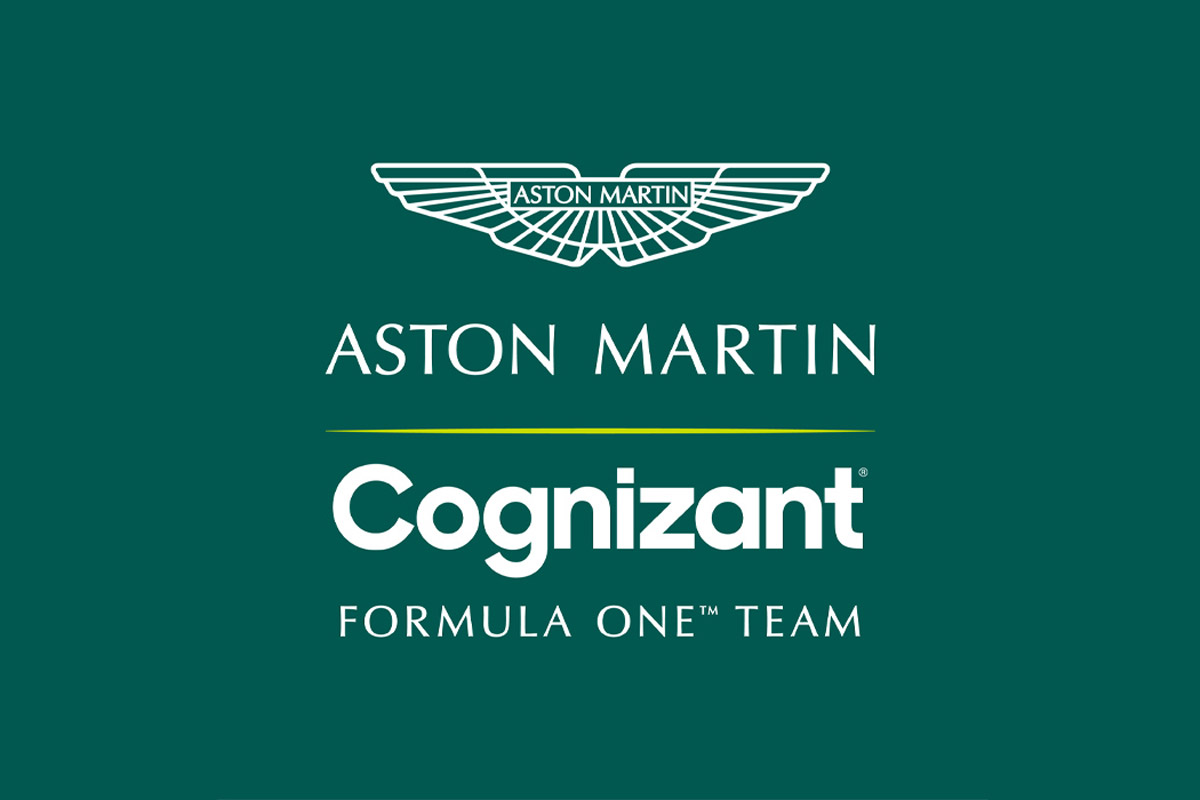 In December then, Aston Martin Racing confirmed that it is leaving the WEC GTE Pro Championship after another victory in 2020 and a really successful campaign overall since 2012. The participation in the new upcoming Hypercar category with the Valkyrie has been postponed too.

As for the GT competitions this year, Aston Martin’s focus will be on customer racing and partner teams for other championships.

The shift toward F1 represents the best opportunity not only financially, but also strategically after a difficult year for the company, with slow sales despite some good signals coming in Q3 with the new DBX (345 units out of 660 total in Q3). In 2021, Formula 1 teams will have a budget cap of $145m (£107m), and focusing its resources can only strengthen Aston Martin’s position. 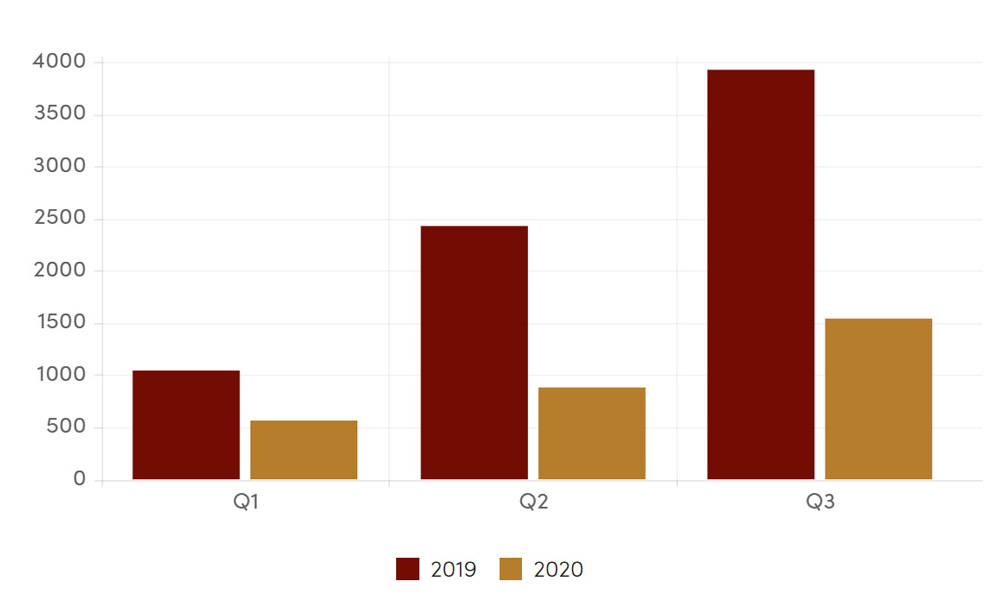 But what about the reception by the public?

A survey of over 300 supercar owners, shows that over 55% follow Formula 1, while only 8.5% watch WEC. These percentages change among Aston Martin owners though. Of the respondents, 58.8% watch Formula 1, and 22% WEC. This increase in WEC audience compared to the overall survey is likely due to the significant effort sustained by Aston Martin in the FIA championship until 2020.

While their successes had a significant effect though, it must be noted that of the 22% of Aston Martin owners following the WEC Championship, 73.3% also follow F1. 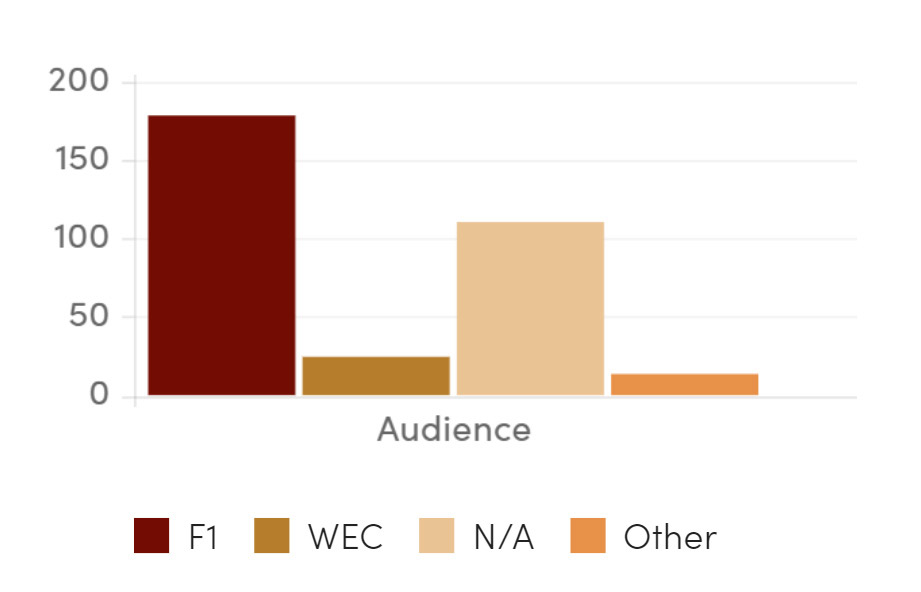 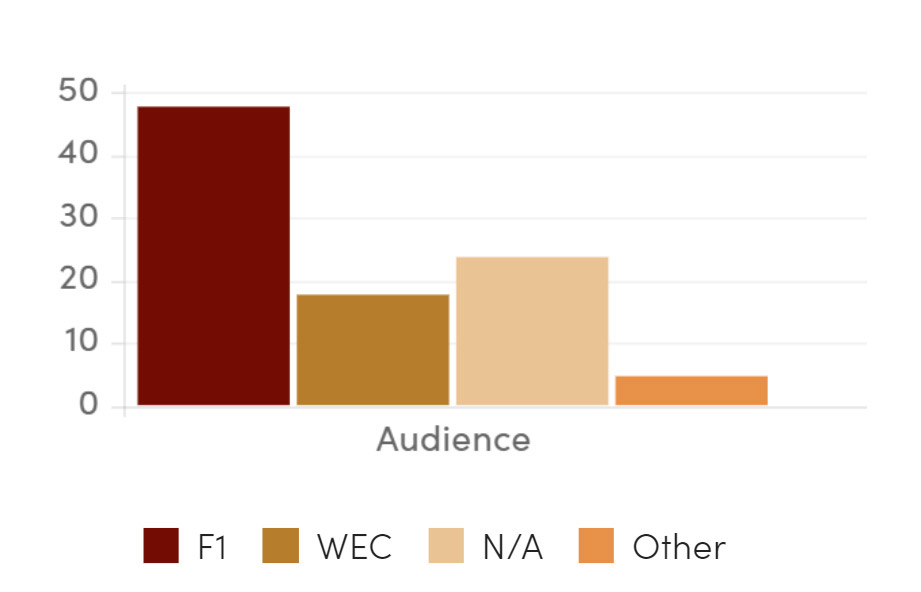 In 2019, Formula 1 experienced a 3.9% decrease in viewership accounting for around 20 million people, to a total of 471 million. Even after a difficult year, during which the overall viewership has probably decreased due to a predictable ending (considering the effect of the majority of Grands Prix behind closed doors), Formula 1 remains by far the most followed motorsport championship.

Additionally, the rise of Official E-sports Championships during the lockdown period has likely helped the sport's popularity.

Aston Martin F1 Team pages have experienced a sharp engagement increase. This has shown through the fast growth of the Aston Martin F1 Twitter and Instagram that both reached over 1 million followers in a short time with a consistent engagement increase, as displayed by the graphs below. This level of attention will likely drop once the excitement passes and the new car is unveiled, but the brand will surely have a long-term effect. 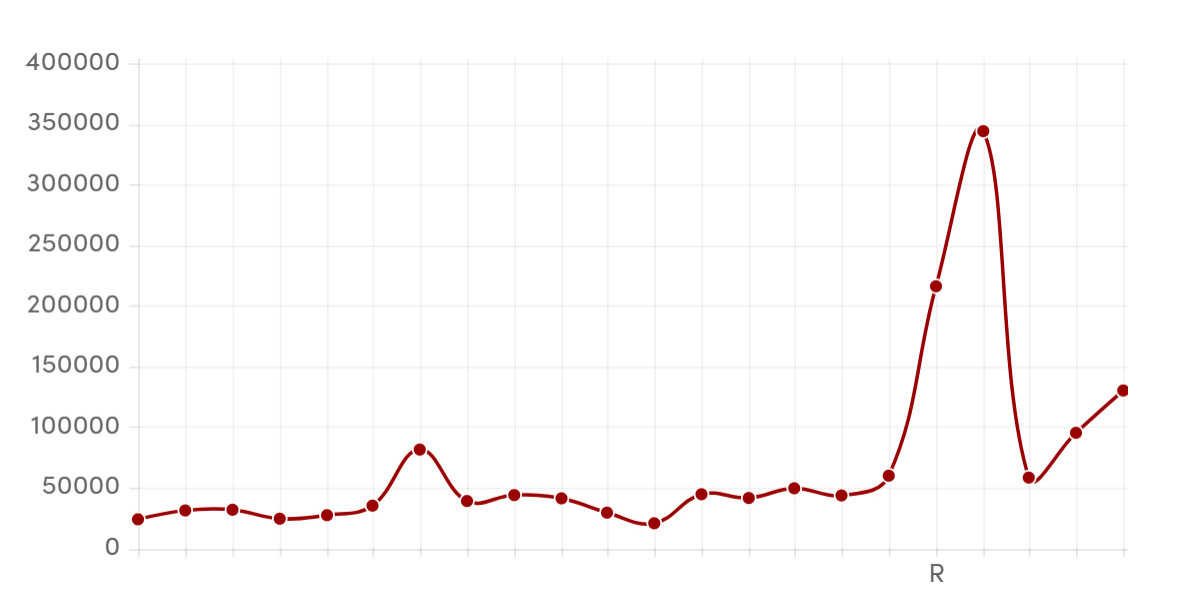 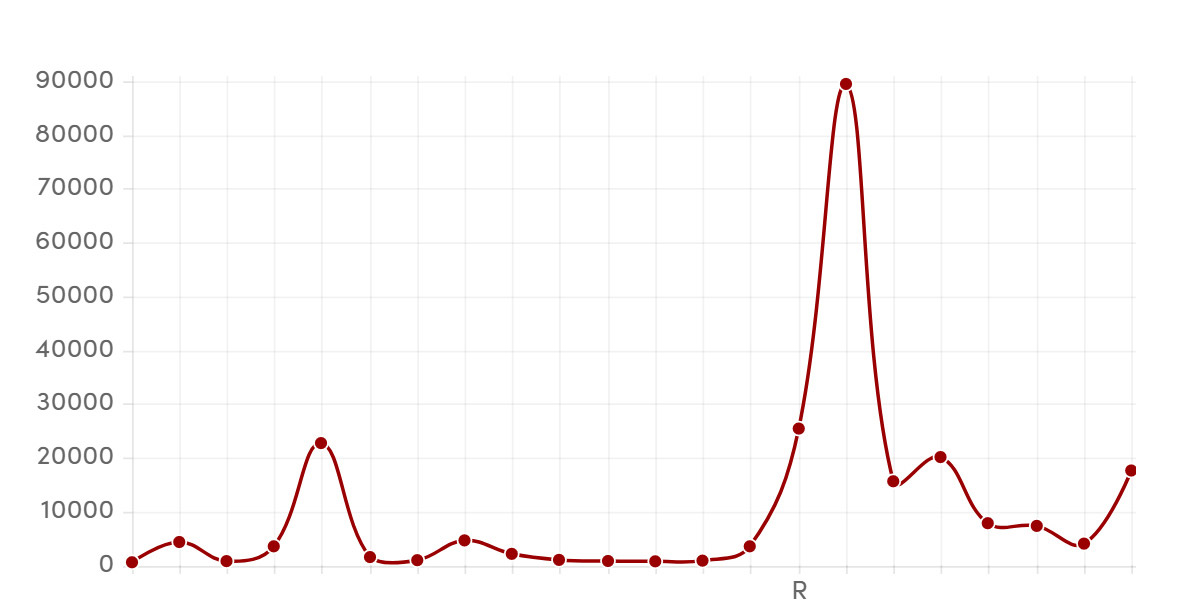 Along with this, Aston Martin has also announced they are going to expand their online presence and insights in the team adding a Tik Tok Channel. So far only Mercedes-Benz, Lamborghini, and Porsche have entered the platform.

Adding to the general enthusiasm, yesterday the first two photos of Sebastian Vettel and Lance Stroll wearing the green suit have been published too. 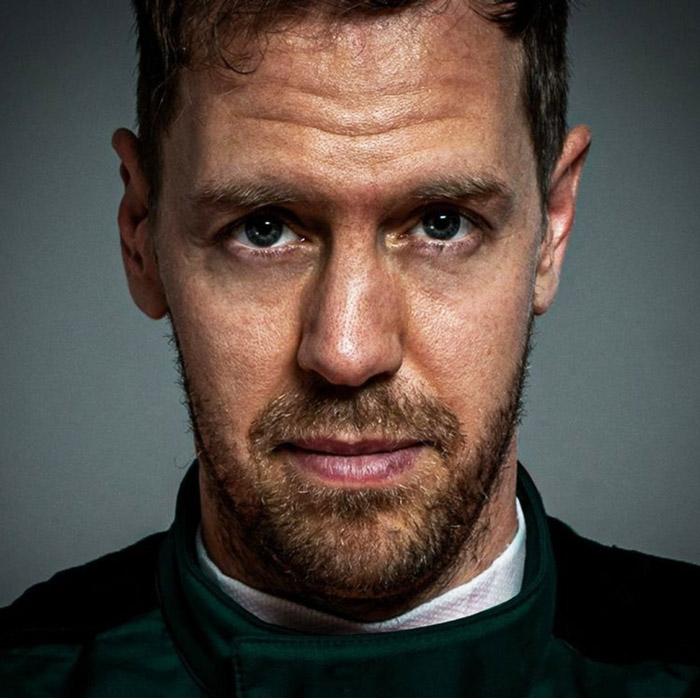 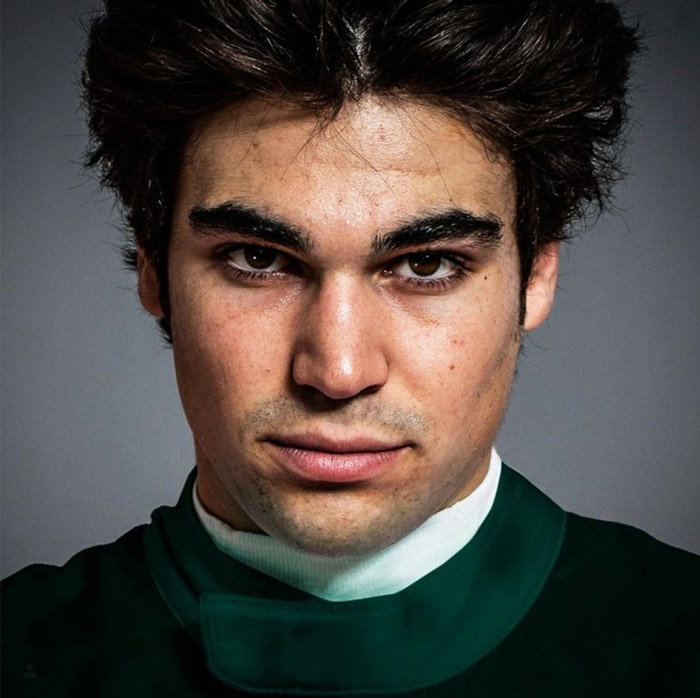 Overall, Aston Martin will enter its first Formula 1 season in over 60 years in a very good starting position. Not only they will start from a car that came remarkably close to the 3rd position in the constructor’s championship but will have the continued support of Mercedes.

From a marketing perspective, it is already one of the most awaited surprises of the new season. Both for the presence of a multiple world champion and for the return to the sport of one of the most beloved luxury automotive brands. A solid season, paired with Mercedes’ agreement and the strong reputation it achieved in motorsport in this decade, will be the best tool to regain the lost ground in the automotive business and boost their products’ appeal.

At the same time, the official Aston Martin Racing Team will not take part in the WEC GTE Championship, but GT racing enthusiasts will still be able to enjoy the new Vantage competing. So that the brand will not lose that important part of its racing heritage and history as well.