Rolls-Royce CEO Torsten Müller-Ötvös has just announced the release of the new Rolls-Royce Ghost that will come in Autumn.

Rolls-Royce is the quintessential expression of luxury in the automotive industry. In terms of attention to details, opulence, and pure focus on a luxurious experience, whether driving or being chauffeured, very few come close, and usually they do with just a single model in a wider lineup. It is the case of Bentley’s Flying Spur or Mercedes with some of its Maybach models.

Otherwise, all the other OEMs in the space have, at least partially, a stronger focus on performance, knowing their cars will be actively driven by their owners. Generally, the Ghost makes no exception to this trend even if, according to Torsten Müller-Ötvös, some owners actually do drive their own and look for an equally exciting driving experience.

The Ghost was launched first in 2009, and price-wise sits in the low part of Rolls-Royce range at £245,790 in the UK (according to H.R. Owen for the 2020 model), with the closest being the SUV Cullinan at £272,190. This manufacturer's suggested retail price (MSRP) naturally excludes options which can easily bring the total well over the £300,000 mark.

It is a fully fledged four-door luxury car, much like the top of the line Phantom, which is bigger, more luxurious, and slightly more powerful. The Ghost though has a more rounded, flowing, and fresh styling, likely aimed at a younger audience. The massive price discrepancy with the Phantom starting at around £350,000 and with even more personalisation options, is the biggest difference. This ensures better market coverage and accessibility while retaining every bit of the brand’s luxury and exclusivity status.

The strategic success of this model is demonstrated by its sales since its introduction in 2009. Over the last decade, with a total of 17,270 units sold, Ghost is by far the most successful model produced by the house of Goodwood up to Q1 of 2020. The strong sales right from its first full year of production allowed Rolls-Royce to jump from around 1000 units per year of the 2000s to 3000-4000 during the 2010s. 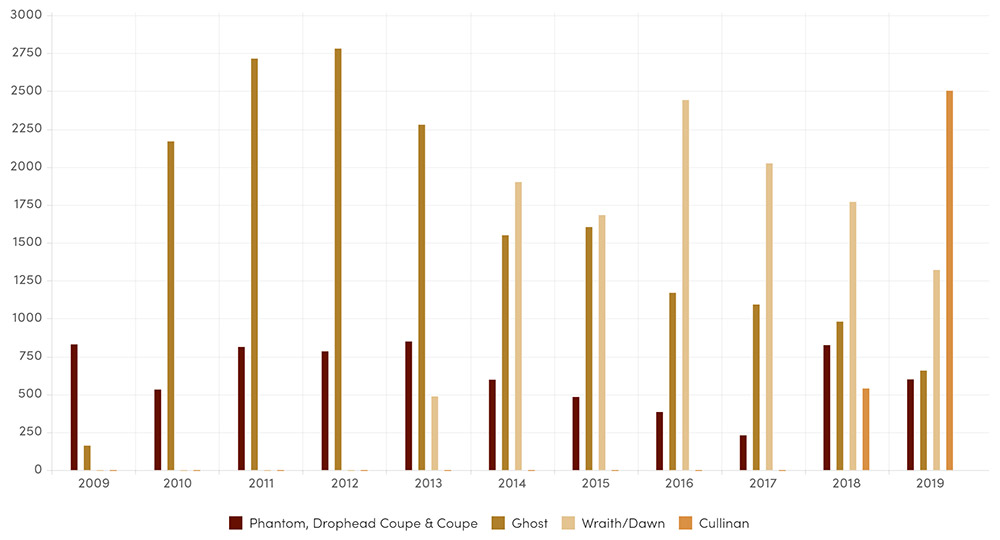 Similar to what the Ghost did, the SUV Cullinan introduced in 2018 is expected to do the same. In 2019 in fact, it outsold all the other models of the range contributing 49% of the total to the best year of the company yet that reached 5100 units sold.

The Ghost significance to the company is also shown by an unprecedented update in Rolls-Royce’s marketing strategy. Up until then and since the very beginning of the 20th century, the firm complemented its business with highly refined printed Ads. Back in 2010 instead, the Ghost was the first car from the British manufacturer to receive a dedicated video Ad published online. And still today it is their oldest video on the official YouTube channel.

The model’s had sharp decline in sales over the last years though with its cycle ending. The upcoming new iteration should reversed it. Mr. Müller-Ötvös claimed that great attention has been paid to changing trends in clients’ preferences (which are discussed in the last paragraph), and the new Ghost should incorporate all of them while still representing the purest Rolls-Royce experience.

Rolls-Royce’s most important marketing tool, as for almost all of the companies in this niche is the brand. In the survey I conducted among luxury car owners, Rolls Royce clients, on a scale from 1 to 10, not only indicated a Brand Satisfaction of 8.3 but also highlighted the Brand as one of the main reason for the purchasing choice with 8.6, second only to Design at 9.3.

Being part of a large group such as BMW is also a relevant strength in this fast-changing automotive industry. Connectivity and software technology development which would be difficult for a low-volume manufacturer to achieve at the industry’s pace, are supplied instead by the parent company. Technological development will be crucial in the next decade as all manufacturers, even low-volume ones go through major changes in powertrain development, IoT, and autonomous driving introduction. 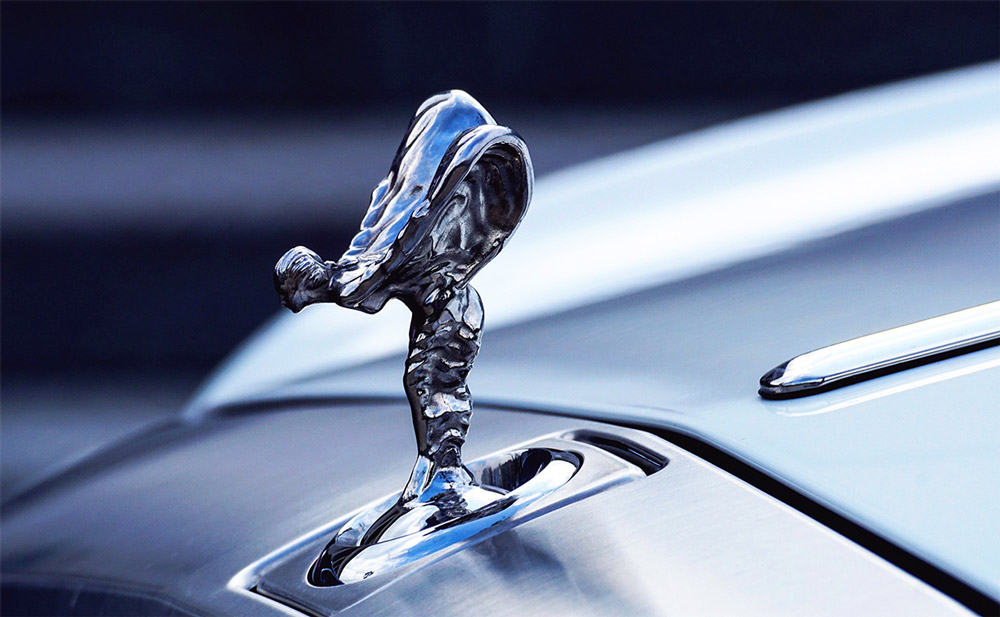 Granted a gradual recovery of the Automotive industry from the pandemic, the concerns that could worry a company with Rolls-Royce status regard mainly the potential loss of brand value. The wrong interpretation of future trends or a loss of exclusivity due to overproduction could compromise the manufacturer’s image. By looking at its closest competitor Bentley, for instance, whose strategy I’ve discussed in a previous article, it is quite evident how their vision differs. Rolls-Royce definitely did not show the emphasis on green technology and sustainability that its British counterpart did. Could this be Bentley’s winning card? It is too early to know, but Rolls-Royce has its own recipe for the future.

Despite not showing a focus as strong as others toward electric technology, at the beginning of 2020 CEO Torsten Müller-Ötvös in an interview for CNBC claimed that Rolls-Royce too will go electric within the next decade. The first examples should come around by 2023. Much like the parent company BMW, which started early with i8 and i3, but at this stage, even with coming EVs planned, looks behind its direct competitors Audi and Mercedes, Rolls-Royce also seemed to overlook this industry revolution for a while.

Going back just a few months, during the summer of 2019 the company let the public know that they would have produced an EV ‘when the time was right’. It was also claimed that they will skip completely the hybrid technology, something on which other companies have been working for several years now. Similarly, there seems to be no interest in developing sustainable interior materials like other manufacturers.

All in all, Rolls-Royce remains extremely consistent with its brand values, regardless of the changes within the industry. Throughout the years though it has given some hints about its renewed vision. 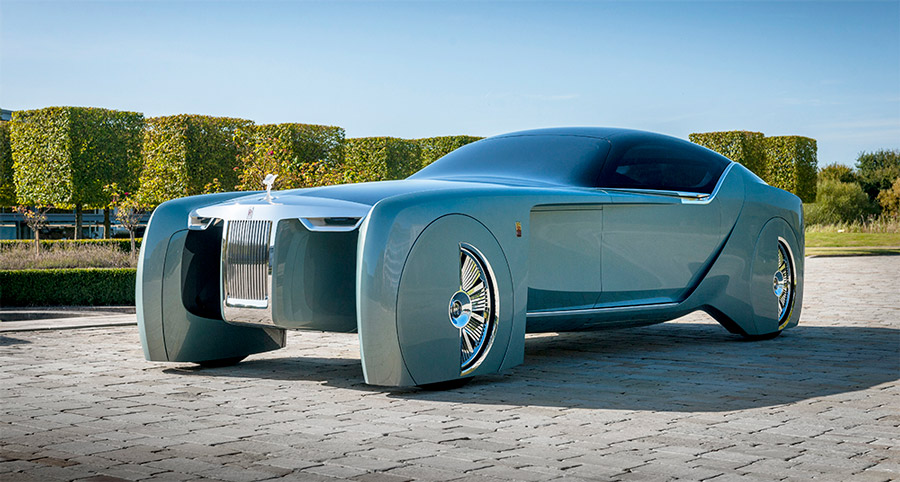 The first, which is about long-term future came in 2016 in the form of the 103EX concept visible in the photo above. A full electric self-driving car that brings to the extreme many company’s values. Starting from the imposing design to the luxurious materials and the absence of a steering wheel. In this Vision Next 100 Concept, the car is, even more, a place to spend time surrounded by the highest luxury possible while being driven around (this time not by a driver).

Then, with the teaser of the new Ghost, Rolls-Royce also introduced a new concept. One that, despite the continued focus on uncompromising luxury, seems a partial departure from its traditional idea of opulence. It is in fact referred to as Post-Opulence and according to it, customers are now looking for more understated and minimalist luxury. So, the company’s aesthetic research this time goes in the direction of a more pure, linear, and light design. The communication style used to introduce the new ‘current’ is also vastly different from older videos such as the one shown previously for the 2009 Ghost. This also suggests a changing approach to the company’s pillar values.

Rolls-Royce is a unique company in its core product and interestingly, it maintains an equally unique course of action during this important time for the automotive industry. While the race for sustainability, hybridisation and (eventually) electrification takes the spotlight even among low-volume manufacturers, the company of Goodwood does not shift its focus one bit. This is Rolls-Royce’s vision for its highly demanding clients over the coming years. Will it hold up, or will the manufacturer be forced to implement a greener outlook into its luxury portfolio?