Maserati strategy: back to the origins to look at the future

Numerous announcements popped up on Maserati’s marketing channels lately, and especially since the beginning of the year. The company is going through a major restructuring process. The developments involve a wide range of business aspects: marketing and customer relationship, top management, production, and of course, product line.

So, what is the best first step for an Italian luxury car manufacturer to signal the beginning of a new era? Producing a highly exclusive, high-performance luxury supercar. This is Maserati’s formula for the entrance in a new decade and in a new phase of its history.

Let’s back up a little first, to review the company’s recent history and most importantly why Maserati needs such a bold announcement.

Maserati is laying the foundation for its recovery after two years of decline that have reached the lowest point in 2019. Financially, the last few weeks are heavily affected by the Covid-19 outbreak as shown by the graphs.

The brand has changed quite a lot in the span of just 20 years. First acquired by Ferrari in 1999, it was handled as a luxury marque, selling low volumes of vehicles every year throughout the 2000s. In 2005 the brand’s ownership was passed to Fiat.

After a sharp decline of almost 50% due to the 2008 financial crisis, the brand restarted climbing up the ladder. Its strategy in the new decade was shaped to drastically increase the sales number to compete directly with big brands in the same segment such as BMW and Mercedes. Huge results, in fact, arrived in 2013 and 2014 thanks to the updated lineup with the new Ghibli and Quattroporte that brought the deliveries from the 5,675 units of 2010 to 36,000 in 2014. Then delays with updates and production of the SUV Levante caused a contraction in 2015, the year for which the new vehicle delivery start was intended. As predicted though, the Levante significantly improved the numbers in the two following years as it happened for every luxury manufacturer. Coming into 2018 and 2019 a late product-cycle, with dated technology and luxury features that did not keep with the competition in terms of value for money, along with big investments for the new generation caused another sharp decline. 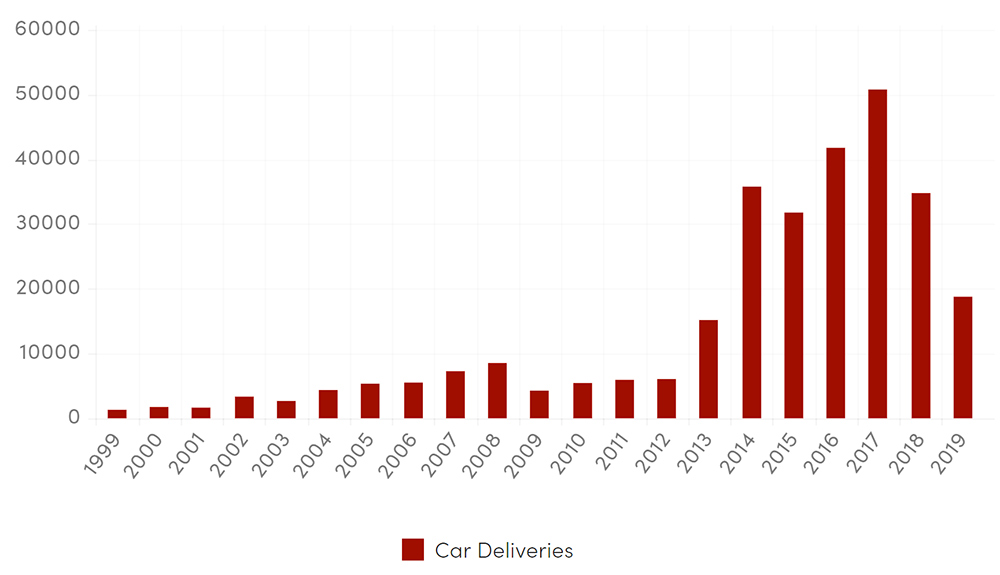 BACK TO THE ORIGINS

Since the second half of 2019, a brand’s refocusing, and a clear vision of its future started to take shape in Maserati’s communication strategy. A large mix of measures has been taken to ensure the survival of the marque in the ‘new luxury automotive industry’. So far, they seem to strike a perfect balance between future vision and celebration of the Trident heritage and prestige, an asset of crucial importance that not many modern manufacturers can boast.

It all started with some relevant marketing initiatives, first of which is the reveal, as mentioned at the beginning, of its new luxury supercar named MC20. The new mid-engine car is the spiritual successor to the successful MC12, supercar based on the Ferrari Enzo, produced only in 50 units that marked Maserati’s return to racing. The name itself MC stands for Maserati Corse (Italian for Maserati Racing), while the 20 recalls the year of production as did the first Maserati racing car Tipo 26.

This is already a return to the roots, but it is even more apparent in the big launch event scheduled initially for May and now delayed to September due to the Covid-19 outbreak. It is called ‘MMXX: The Way Forward’. The intention to reiterate heritage and ‘Italianness’  is clear from the decision to use roman numbers, to the choice of Modena as setting for it, to strengthening the brand’s identity with messages such as ‘Maserati has 100% Italian DNA and is in continuous movement’. The last part of this statement though is also really relevant, so let’s look at the ‘continuous movement’.

WHAT ABOUT THE FUTURE IN THE MARKETING MIX AND STRATEGY?

The restructuring goes indeed even deeper. First came the announcement at the end of 2019 of the appointment of a new leadership team with new CCO and CMO Bernard Loire and Paolo Tubito. Then, the press releases regarding the restructuring and updating of the Italian industrial plants in Modena and Turin, with the last one, in particular, receiving an €800 million investment from FCA for a new EV production hub. These, of course, regard mainly plans for the development of hybrid powertrain that will be applied to the upcoming Ghibli and the full electric one to the GranCabrio and GranTurismo further down the road. Part of another €5 billion R&D investment by FCA for Italy is also directed at the development of autonomous driving from level 2 to 3.

The marketing activities continued also through Maserati’s sponsored Multi 70 Trimaran which in one if its last regattas displayed the MC20 logo on the sails. Trimaran regattas might seem an unusual choice for marketing promotion but digging a little deeper is sufficient to see that it is not. Being a very niche sport and, especially for those who practice it, mostly linked to the world of luxury, speed, aerodynamics, and technological evolution, it is closer to the automotive sector than one could expect. Brands in the same market segment such as Aston Martin, Mercedes, Volvo, and Land Rover have all some degree of involvement in the nautical niche, whether it is through luxury yachts or regattas.

Finally, on the customer care and engagement side, there are also interesting updates. First is the new personalisation program which is a really important requirement in today’s luxury industry, and it is being applied more and more even by premium manufacturers, not just those in the top luxury segment. A new workshop in Modena will be built for it. Secondly, the Modena factory will also have a modern paint shop that will carry out a double function: the implementation of eco-friendly technologies and a special structure that will allow clients to follow their cars being painted.

The overarching strategy put in place by Maserati involves numerous aspects of the business and addresses different issues. Mainly the dated product line and the loss of Italian prestige due to the close link with mass-produced Chrysler cars. This along with the ‘obsolete’ technology and lack of luxury features put Maserati at a disadvantage in comparison with its competitors in the same market segment.

The new plan instead shows a clear vision for the company’s future and employs a smart balance of Italian heritage, racing spirit, and pursuit of innovation. All the actions will be delayed due to the current situation, but the pieces are in place on the chessboard. Whether the strategy will be well-executed remains to be seen but the starting position is certainly good.