The Porsche Taycan has been a big deal for the industry since its first appearance as a concept under the name Mission E. It was the first long-standing established luxury manufacturer to start the production of an electric vehicle, which is something that very few do even today.

During its first year, Taycan has been a commercial success too, selling 20,015 units. It prominently entered Porsche’s lineup, exceeding the Boxster/Cayman 19,263 sales of 2019, which was a year of general strong growth. Additionally, as of today, outside of China, EVs have been mainly sold in the premium segment of the market. Mostly due to battery pack costs and customer habits.

For a while now, China’s customers, in fact, have seemed to be less concerned with maximum range and tend to favour more affordable cars instead, to move mainly in the city as highlighted in the Chinese Market Research. 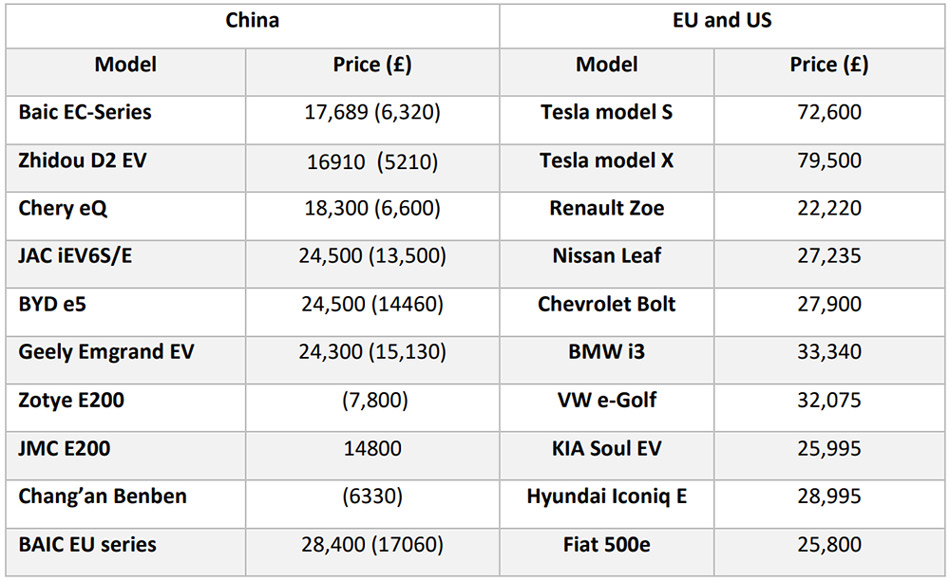 In western countries instead, the range is generally considered one of the most important features for EVs and one of the main stages of competition between companies. And the trend is still partially unchanged, but with signs of balancing. Especially with the popularity of Tesla’s Model 3 in the EU and US. Tesla so far has been the dominant player in the premium-luxury EV segment. At least until Porsche’s entry. 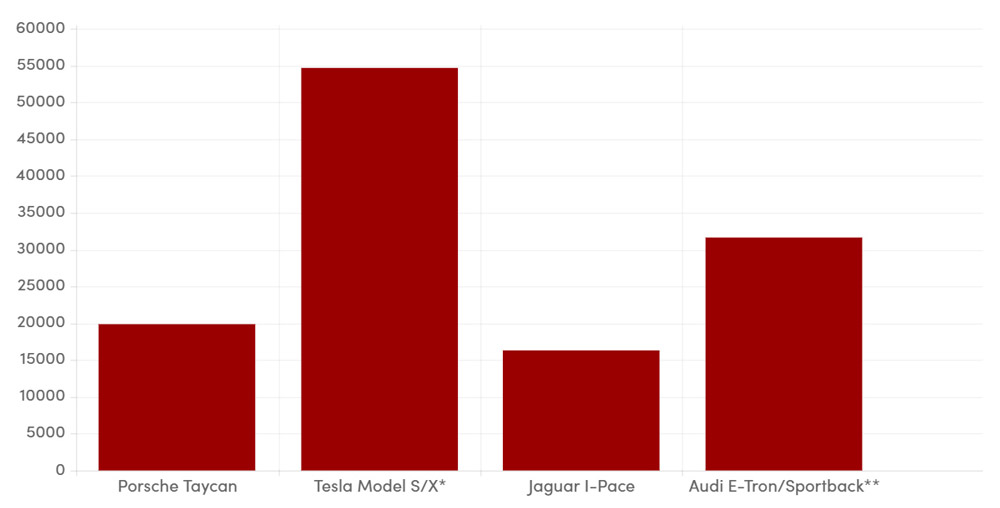 Along with the good results shown in this graph, there are two important factors to keep in mind. The first is that except in its base version, Taycan is generally much more expensive than the competitors listed here (the new Tesla Model S and X Plaid come closer to it). Secondly, Model X, Audi E-Tron, and I-Pace are all in the small SUV or Crossover segment which is definitely more sought after these days. These two factors make the Taycan results even more impressive and more interesting the potential for the upcoming Cross Turismo.

This scenario is likely to change significantly in 2021 as a number of high-profile competitors have entered the market in mid to late 2020. Polestar 2, BMW iX3, Ford Mustang Mach-E to name a few.

Determined the Taycan noteworthy success, even within a competitive segment that is not the most popular nowadays, let’s have a look at how Porsche achieved this success. What kind of campaigns did Porsche employ for its first EV Promotion?

Taycan like many other luxury vehicles, especially during 2020 with lockdowns and restrictions got a lot of visibility thanks to online reviews and driving tests. Since its release, in fact, it made the first page of pretty much every automotive social media outlet, not only for the novelty of being an electric Porsche but thanks to its characteristics. From the overall build quality far superior to that of its competitors to its driving capabilities.

Chris Harris, like others, in his review points out how the car driving dynamic and agility is superior to other electric vehicles and actually extremely close to the one in a regular Porsche ICE Sportscar despite its considerable weight.

Additionally, a consequence of the interest in the new drivetrain and technology started by Tesla’s success is that Taycan too caught the attention of a new audience that does not necessarily overlap with that of car enthusiasts. EVs have in fact grown in popularity among the tech fans community. Satisfying the needs and wishes of this new (and generally very young) audience can benefit Porsche by bringing in new potential clients and increasing brand loyalty.

These are crucial components of modern marketing for any luxury car. In the case of the Taycan though, there is more…

I previously discussed the success of The Heist, the second most-viewed automotive video on YouTube, and a great example of the power of storytelling in automotive marketing that many other automakers are following. This is already quite a unique achievement and a display opportunity for Porsche.

The second one-of-a-kind initiative to promote Taycan has been realised in Seoul on the occasion of its launch in Korea. The show itself featured an extraordinary light show symbolising the futuristic look and technology employed for this car. What is even more surprising though, is that in the days leading up to the event, a lorry carried around through the city an installation with a 3D Hologram representing running horses. The idea comes from the name of the car which according to Porsche ‘can be roughly translated to mean soul of a spirited young horse’. 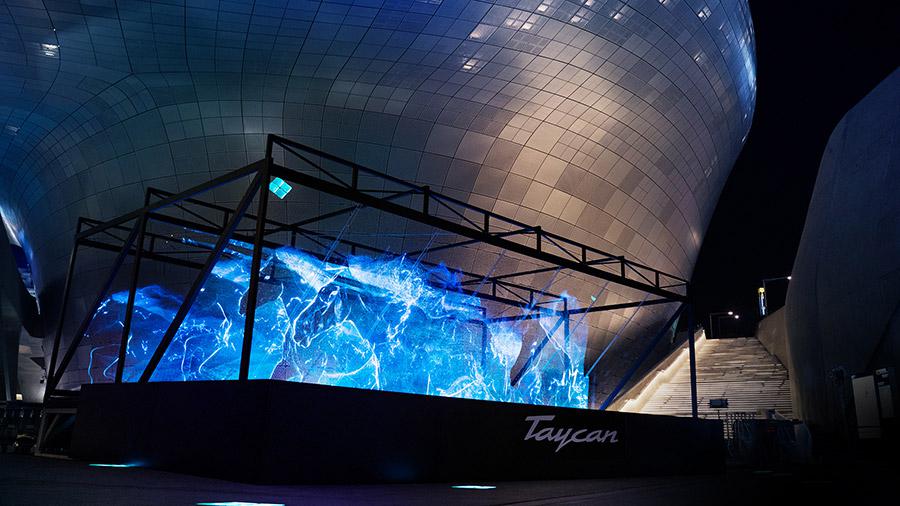 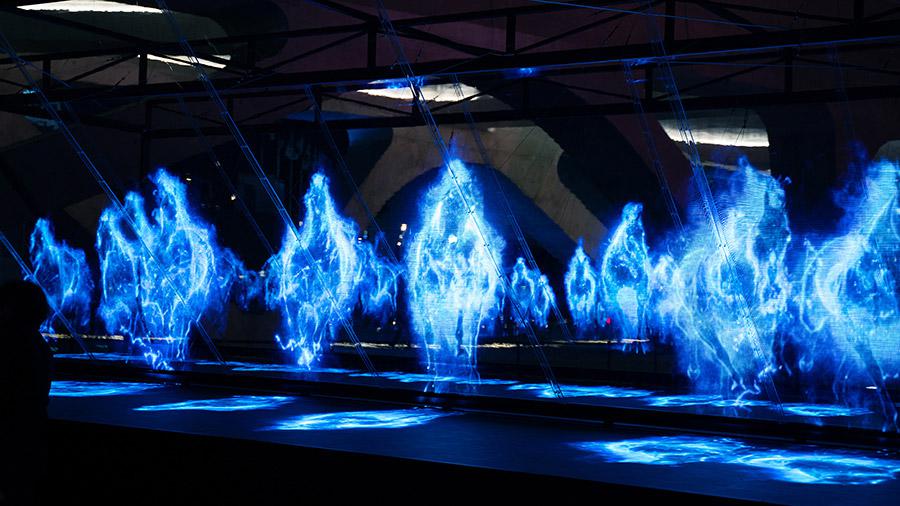 While very impressive, this is not the last unusual campaign organised by Porsche to push the EV to maximum visibility. So here comes the Guinness World Records.

On two separate occasions, Taycan achieved World Records for the longest drift with an electric vehicle and the highest indoor vehicle speed.

On the first, driving instructor Dennis Retera completed 210 laps of a 200 metres circle, for a total of 42,171 Kilometres covered in 55 minutes. This specific record served also to showcase the potential of the rear-wheel-drive Taycan, produced exactly to enhance the fun and feeling of a true sportscar. 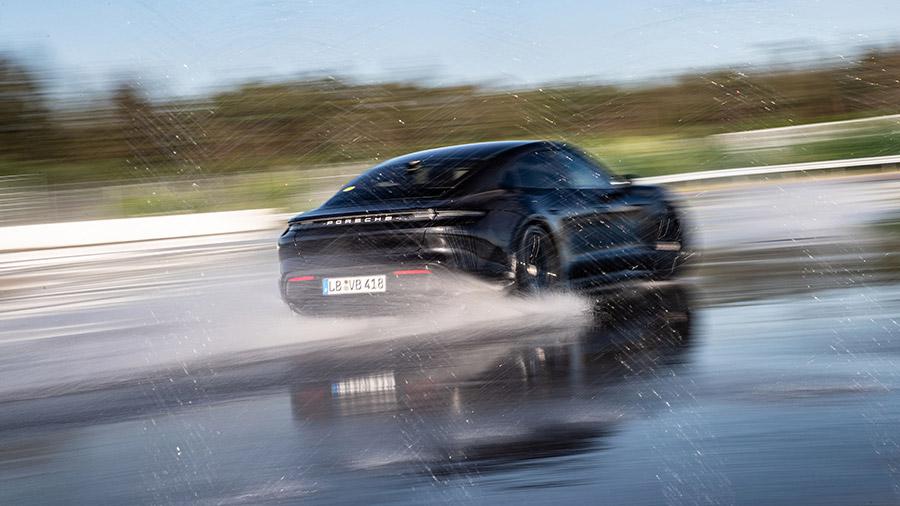 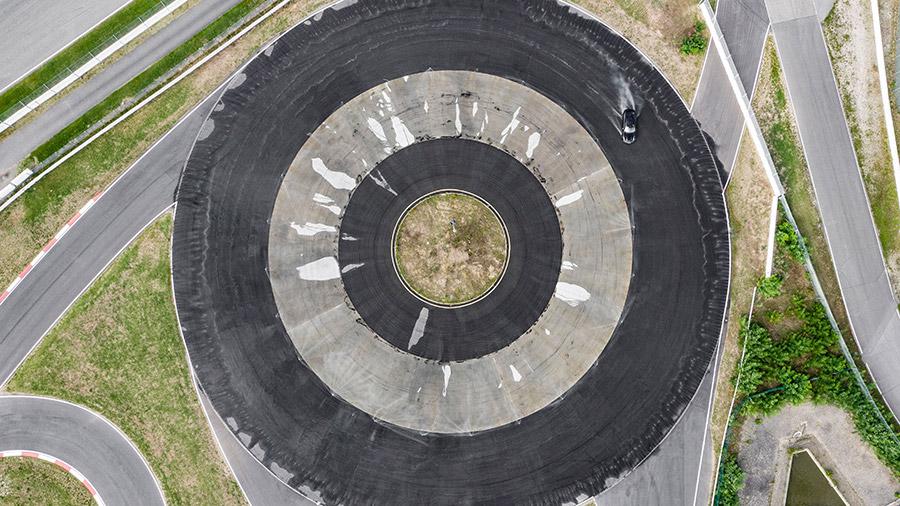 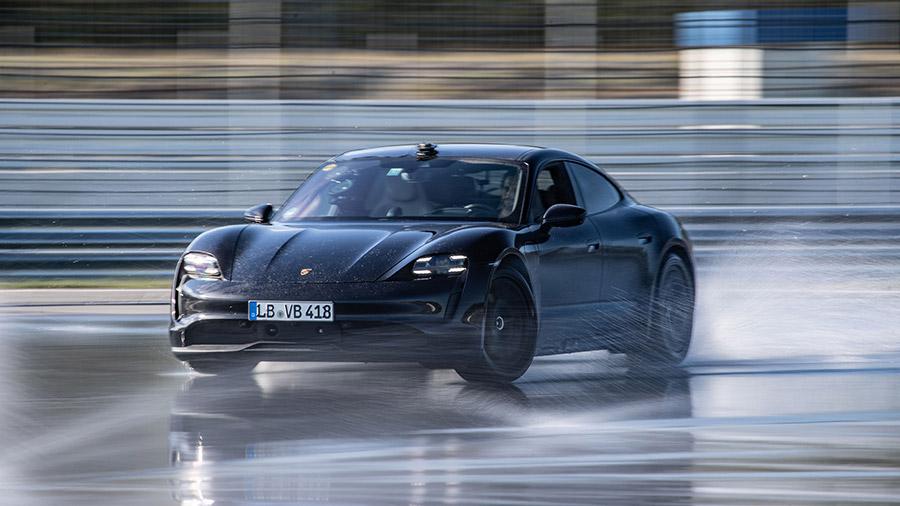 The second record instead was set by racing driver Leh Keen reaching a top speed of 165.1 Km/h in an enclosed building. This time the AWD Taycan was used to maximise grip, acceleration, and crucially, deceleration, as the space available was limited by the Guinness World Record rules.

This was an important showcase of top performance. Complete trust in the vehicle’s capabilities on a tricky slick surface, allowed the driver to achieve the record on the first attempt. 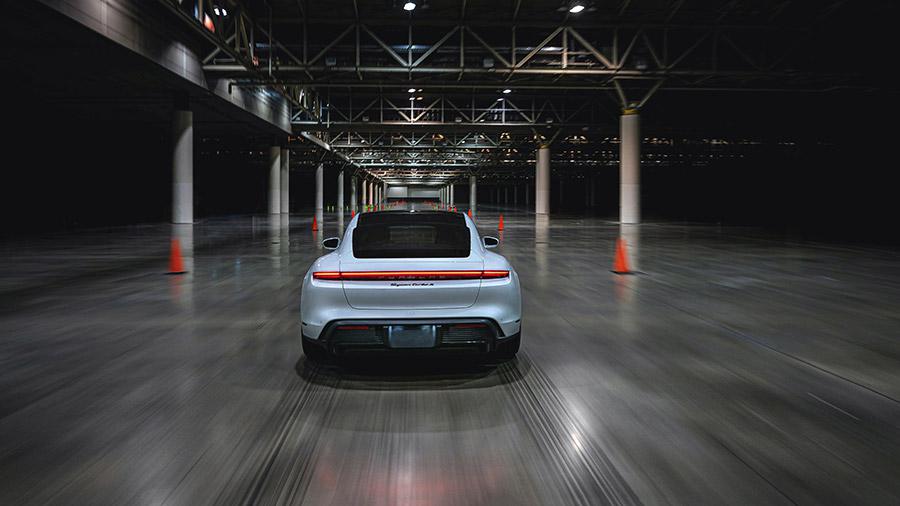 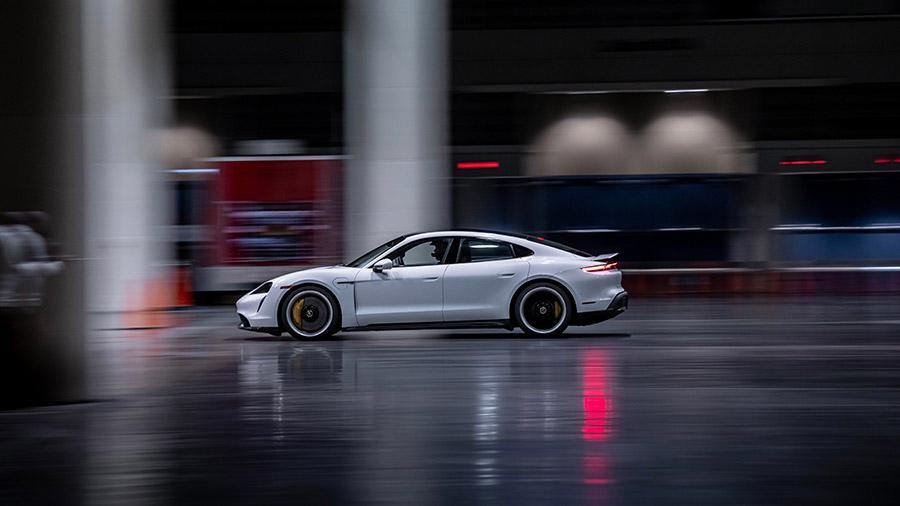 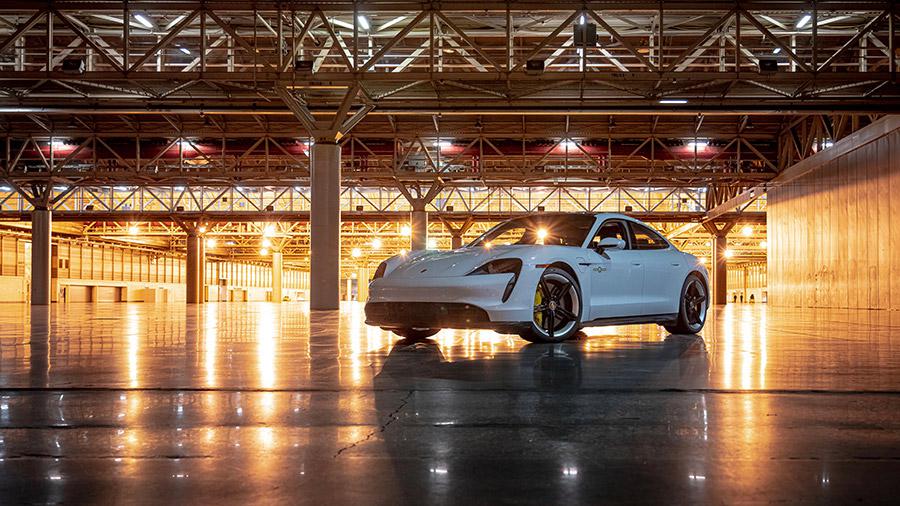 Even though from an everyday performance perspective these achievements might not seem to mean much, this is different for car enthusiasts and will likely prove to be a smart move. Proving that a good electric sportscar is more than just straight-line speed, might help to convince current luxury performance car buyers that generally meet EVs with a certain scepticism.

If all the rest was not enough, this will at least be another way to record the Taycan on the history pages.