By now, the chip shortage has been going on for longer than many people may think and has affected pretty much everyone in different ways.

You might have tried to purchase a product and either got the message that severe delays would occurr or simply the good you were after is out of stock.

A constant stream of news has been published in the past months about phones, gaming consoles, and the likes being delayed, or simply extremely rare to find, with soaring prices on some marketplaces. The same has been happening to automakers and dealers. Interviewed by CNBC, AlixPartner’s automotive and industrial practice managing director, Dan Hearsch claims this is a critical issue for the industry as modern vehicles, on average, need around 1,400 chips. This number is also going to increase with new vehicles, especially the electric ones, packing more and more integrated technology for ADAS, connectivity, and autonomous capabilities. The same source forecasts a loss of $210 billion for automakers in 2021, with a decrease of 7.7 million vehicles’ production. Several companies are, in fact, being forced to shut down at least parts of their production plants.

HOW DID THE SHORTAGE COME ABOUT IN THE AUTOMOTIVE INDUSTRY?

The first cause for the auto industry was the slump in sales in the first half of 2020 due to the pandemic. But not the only one.

Automotive groups delayed or cancelled parts of their orders for microprocessors when the factories went into lockdown and certain markets lost as much as 60% in sales over the first two quarters. At the same time though, consumer electronics saw a sudden rise as people, forced to stay at home, had to upgrade their home set-up to keep working, or simply spend more on digital entertainment.

Arguably, the two most important factors in this picture however are that the concentration of the semiconductors market and the extreme difficulty of the production process. While lots of companies design their own chips, in fact, the vast majority outsources its production to very few manufacturers. 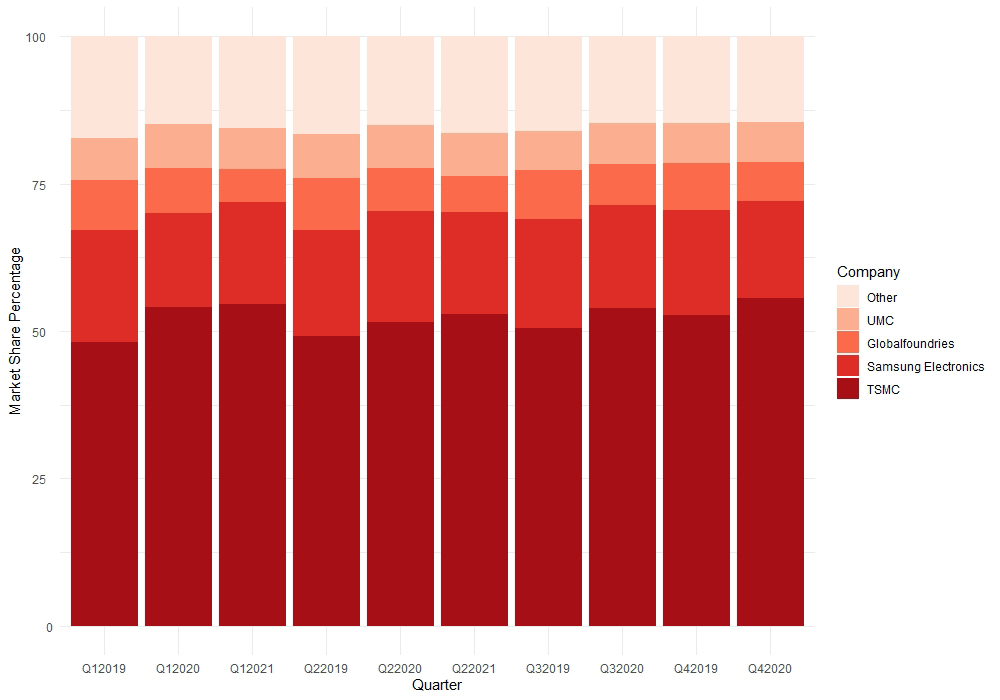 Over the last two years, Taiwan Semiconductors Manufacturing Company (TSMC) had an average share of over 50% of the global market. For companies focusing more on automotive, the market is less concentrated, but the number of players is still quite limited, with the 5 top companies accounting for over 50% of the total $33.5 billion revenue of the segment in 2020. 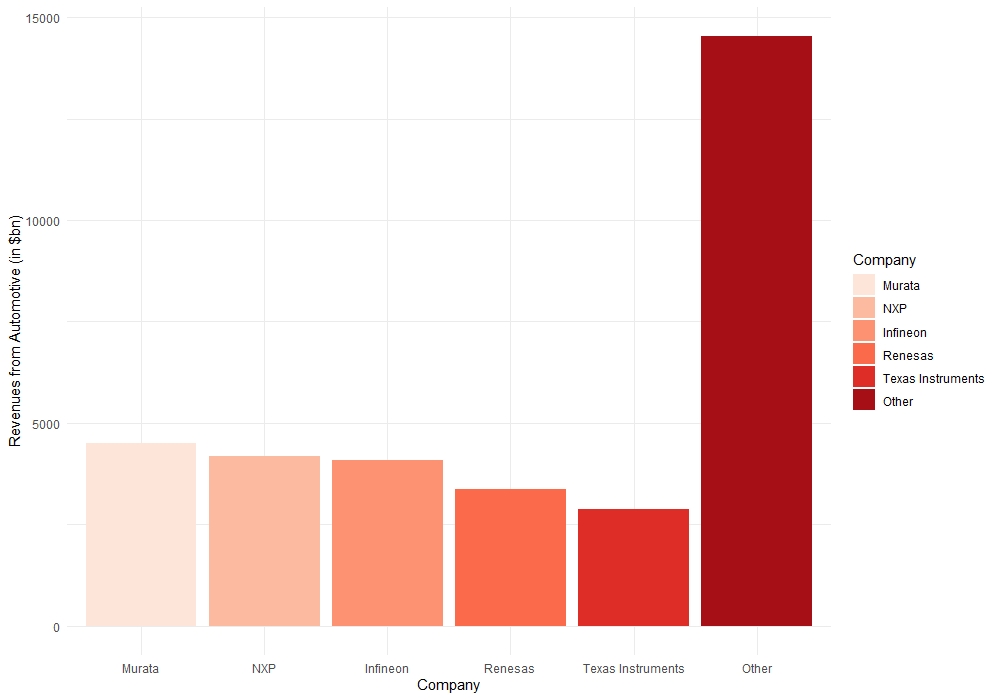 This is a significant structural risk that will surely change in the future (as a matter of fact, it is changing right now already).

So, as automakers reduced their orders in 2020, semiconductors manufacturers shifted their production to focus on the rising demand from other markets. However, because the production is so complex, these changes can take months. When the automotive sales started to recover faster than expected automakers found themselves exposed to a severe lack of supply.

Three more are the factors that most likely exacerbated the current situation. One is the continued rise of cryptocurrencies, with miners driving an increase in chips’ prices due to the higher demand for equipment. Second, the fire at Renesas (the fourth company in revenue for automotive chips as shown in the graph above) in Japan, that back in march burnt 600 square feet of machinery. The full recovery alone took over three months.

Finally, instances of Chinese dealers and firms stockpiling chips are a contributing factor as well. TSMC’s Mark Liu, talking with Time claimed that several companies in China had been stockpiling chips due to fear of being targeted as it happened to Huawei. The Taiwan manufacturer, in fact, halted its supply when the US accused the Chinese giant of being a proxy of the Chinese government.

Another side of the same medal is Chinese companies hoarding these semiconductors to drive up the prices. Bloomberg already reported that the China’s state of Administration for Market Regulation launched an investigation to verify this behaviour and punish companies found to be at fault.

To top it all off, as mentioned in the beginning, BEV's new and developing technologies will require more and more semiconductors in the future. 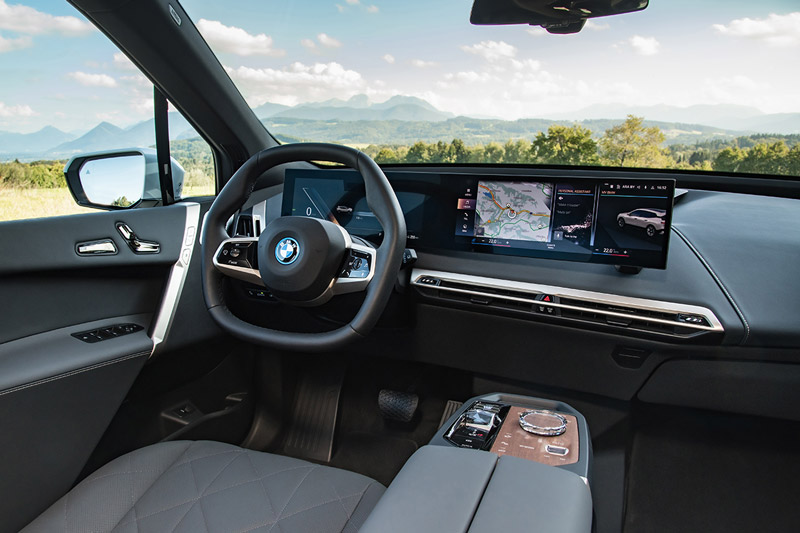 FURTHER RISKS FOR THE FUTURE

The shortage is not over, yet there are additional risks for the future of the sector. Even if production capacity goes back to match the industry demand, there is another risk that could endanger the industry in the next years.IHS Markit senior automotive analyst Phil Amsrud told Euronews that semiconductor suppliers require now longer firm orders. Susquehanna Financial Group told Bloomberg that back in July, lead times reached an all-time high of 20.2 weeks between order and delivery.These difficulties, along with the current low supply may induce automakers in hoarding chips too. This seems to be the case as another representative from IHS Markit claimed that suppliers received orders corresponding to well over 100 million vehicles which they already know is far above what the industry will achieve this year.The stockpiling could cause a new imbalance in the future. And it would not be anything new. A similar situation happened already in 2019. The forecasts of 2018, which had been a positive year for the automotive market, led to larger orders of semiconductors by automakers for 2019. That year though, the slowdown led by the Chinese market meant that big suppliers, such as German Infineon and Japanese Renesas, incurred serious overproduction issues. As a result, Infineon had to lower its revenue guidance for the year twice, due to a stagnating second half, and Renesas had to halt production.

Industry experts suggest that the shortage is not ending anytime soon, and as highlighted there are no true short-term options. McKinsey suggests that automakers, suppliers, and manufacturers review their contracts for semiconductors sourcing, making more binding commitments, and establish a balanced risk-sharing plan. 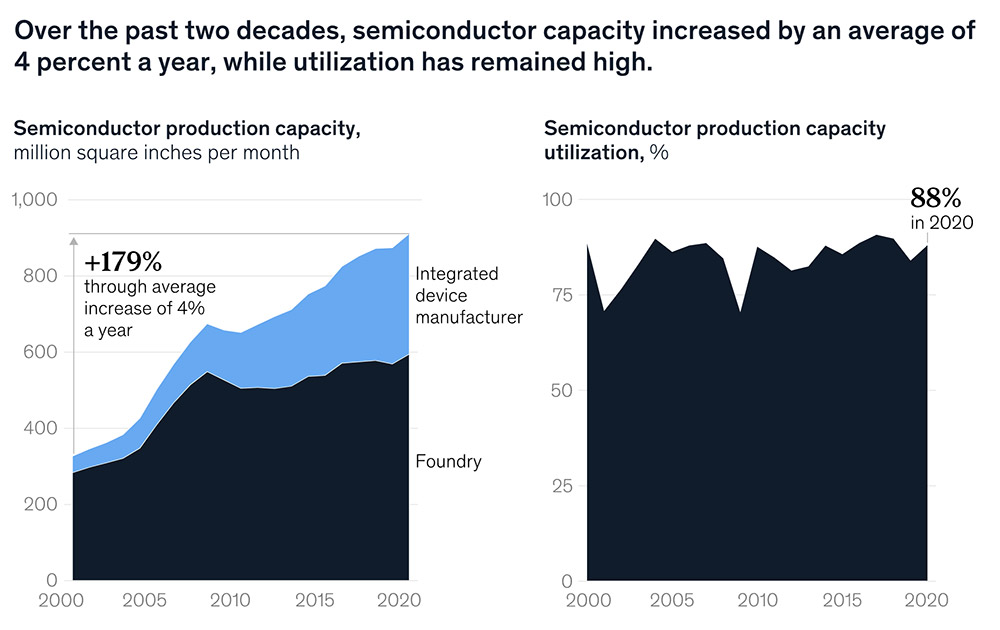 For luxury automakers, the possibility to focus on high-margin vehicles is an important advantage in the face of reduced supply and increasing prices. As for low-volume manufacturers, the build-to-order strategy, or in general the ‘just-in-time’ supply chain popular in automotive, can be a double-edged sword. Lower supplies requirements can expose to risks in case of a shortage, but can also mean more ease in finding the resources needed and management efficiency.

In Europe, Bosch as a major supplier that collaborates with different luxury automakers was not affected as badly as other companies. However, its issues prompted a warning for the entire industry stating that the current supply chain is no longer suited for the modern automotive industry.

For this reason, the German company has built a new €1 billion plant, and many other manufacturers, such as TSMC, Samsung, and Intel, are doing the same, investing tens of billions to localise their production and reduce the reliance on third parties. Automakers then could consider sourcing part of their supplies from other parties. This strategy would not work in the short-term though, but could in the medium to long-term, as moving a product design to another manufacturer can easily take up between six months and a year, even to a factory already established. Increasing the production capacity while spreading the activities to various local regions seems the best way to avoid the market concentration that has been arguably the most important strategic factor causing the supply chain failures along with the pandemic.

In a news article published a few days ago by various sources but not reported by major outlets, Mercedes would have announced that to reduce the impact of this shortage, upon requests, it will sell vehicles with reduced technical equipment at a lower price. As for ‘regular’ vehicles, the only option for clients right now is to wait for the arrival of the components needed.

If feasible, this would be an interesting decision to try and limit the damages of the crisis in the second half of 2021, the news, however, is not confirmed by the Mercedes Media website and other major automotive-related websites.