China's EV Challenge: Are foreign Automakers up for it?

The favourite slogans of a certain part of experts or news outlets about the automotive industry, especially those involved with Asian markets has been quite ‘menacing’ lately for well-established firms.

It is quite common to see titles such as “China is coming” and the like. We always get the feeling that not only China is way ahead of the competition when it comes to the opening to new technologies such as electric vehicles (EVs) and autonomous driving but also that it will soon dominate the global automotive industry. As China gives up its quest for competition in Internal combustion engine (ICE) cars against established foreign companies that up until today have dominated its domestic market and focuses on EVs, it seems that foreign automakers do not realise that they will soon be overpowered by EVs manufacturers.

Could these companies be so blind? Automakers plans and numbers in the last two years tell a different story.

By looking at the R&D spending in 2017, it is evident a huge gap between the commitment of major long-established car manufacturers and Chinese competitors.

This trend continued in 2018. All the top manufacturers have increased their spending (some just slightly). Despite many Chinese automakers not having released their official figures yet, the equilibrium established in 2017 seems to be the same with the exception of SAIC Motor which consolidated its business and registered a good increase in sales. 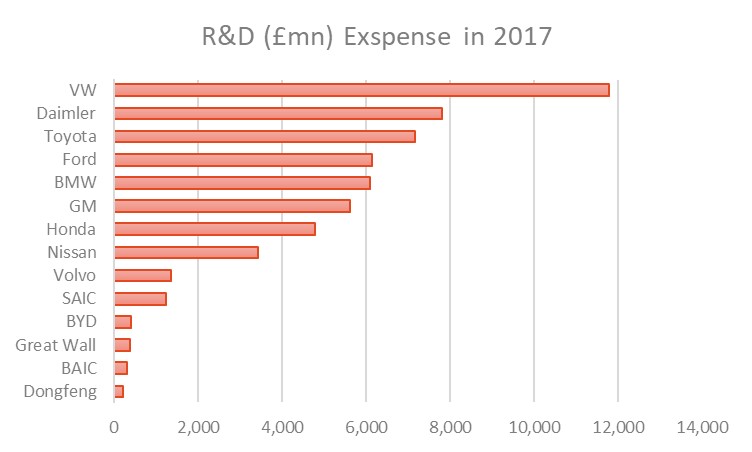 The majority of these resources, employed in the development of more efficient hybrid or fully electric powertrains, autonomous driving, and connectivity technologies are an indication of how seriously big automakers are taking this challenge.

The conclusion anyway is not so obvious, and there are a couple of points to consider. First, many of these big multinationals have a consistent R&D presence right in China, which is creating the perfect environment for this new market rise thanks to the push of government investments. Naturally, all these companies entered this market several years ago under the obligation of establishing a 50-50 Joint Venture with a Chinese partner. Despite Beijing talking about dropping this regulation, numerous high-profile Executives expressed their will to keep these partnerships going. It would be too risky, money, and time-consuming to dismantle such agreements and proceed alone. In the end then, this gives Chinese companies a great opportunity to take advantage of the know-how of their foreign partners and of the potential knowledge spillover of this new ‘EVs-Silicon-Valley’.

A second factor that plays an important role in this estimate is that many of these newborn Chinese EV start-ups are still fairly small. Thus, they surely could not yet challenge giants such as VW or Toyota in terms of resources. Despite receiving investments from Chinese champions like Tencent, Baidu, and Alibaba, their R&D spending is unlikely to be comparable as well. The mere size though does not automatically translates into success if the firm’s efforts are well-directed. There are remarkable examples from both large and small automakers like SAIC Motor, Nio, or Volvo’s sub-brand Polestar that either with continued long-term efforts or with new and original projects have gained a lot of attention and good profits.

But a large pool of resources also means that big car manufacturers have much more disposable income to rapidly catch up (if needed) in this race for innovation, and they are not wasting time. According to research conducted by Reuters, Global automakers predict a $300 billion (£230bn) spending on EV technology of the next 10 years, mostly directed at China. VW which represents the lion’s share in the last weeks revealed its plan to reach the production of 22 million EVs in the same timeframe by reaching a total of 70 different models (EVs and Hybrids) worldwide. 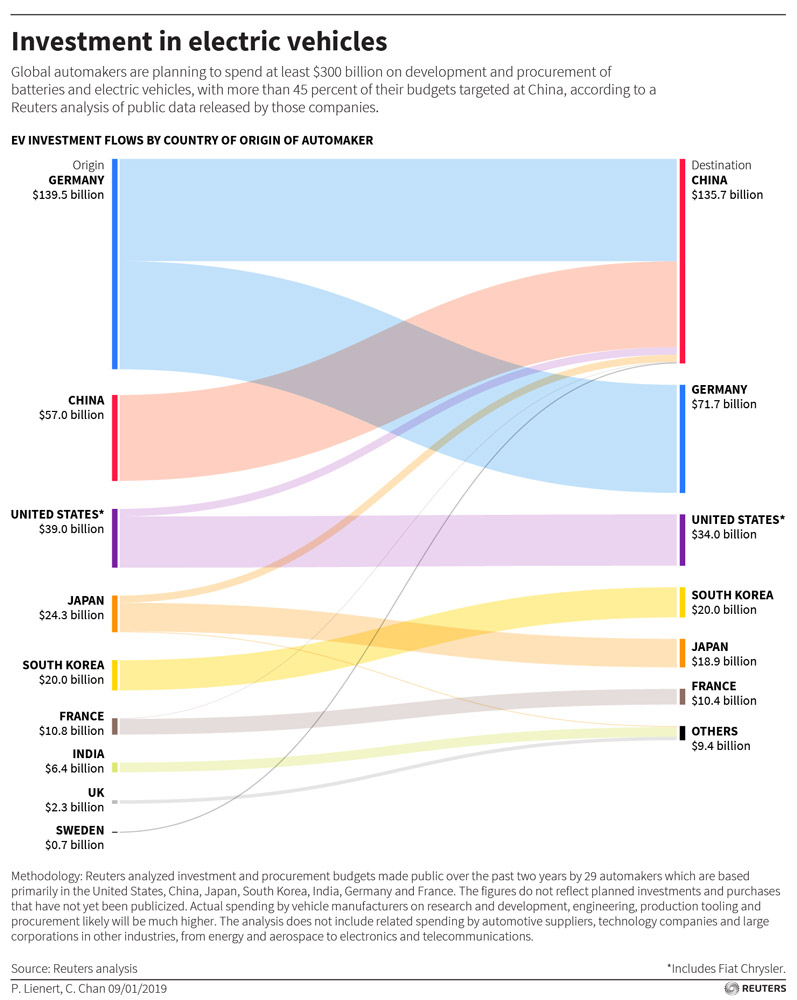 The numbers reflect not only that foreign automakers can cope with the competition but that they also have a clear understanding of the global sector’s direction. Two are the factors that are bound to have a real impact on the future balance of the automotive industry.

The first one is the renewed nationalistic trust of Chinese citizens in their domestic companies. This is a trend that is increasingly evident in different consumer products’ markets. One example is the smartphone sector that saw Apple’s share decreasing in favour of domestic firms like Huawei, Oppo, and Vivo. The government decision of relaxing the 50-50 Joint venture regulation in the automotive sector looks also like an indication of the Party officials' trust in their domestic champions' potential to sustain and win the competition at least in the domestic market. 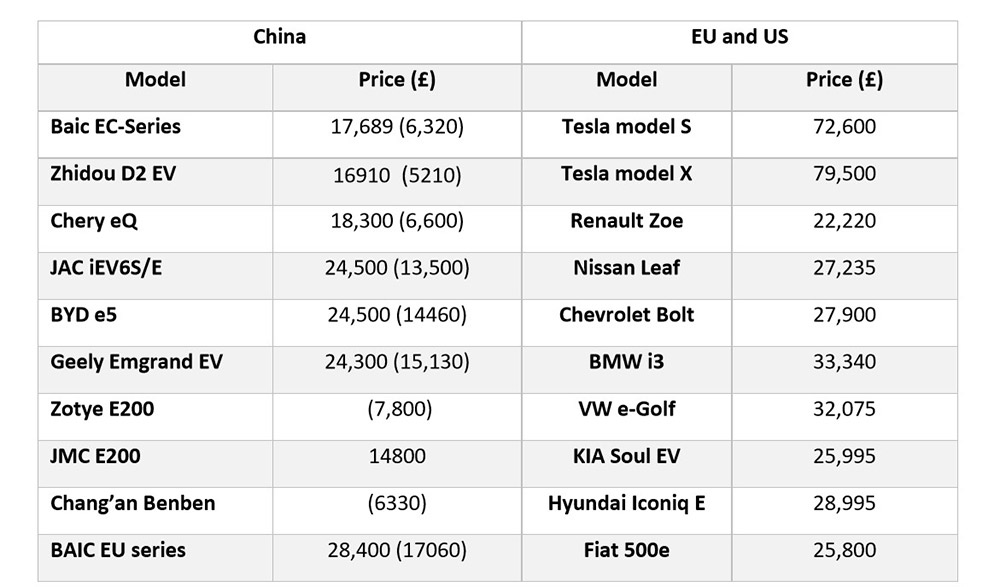 *prices in the brackets are after incentives

Related to this are a slowing economy and a middle class (especially younger generations) that is way less inclined to spend big amounts of money on cars. The price sensitivity represents an additional concern for American automakers caught in the trade war and up against a fierce price competition from their Asian best-seller counterparts.

As the expert, Shaun Rein said in an interview with Forbes, in his survey on 5000 consumers in 15 cities in 2011, 85% of the interviewed claimed to always prefer foreign brands. Only 5 years later, in 2016 this percentage has shifted to 60% in favour of domestic ones. The real challenge ahead then is how to provide a higher value for the Chinese customers in order to overcome this nationalistic sentiment more than the technological development aspect.

Finally, the other major influencing factor is the government's action. China is fully committed to creating the best condition possible for its champions to thrive and consolidate, reducing the dispersion of resources over hundreds of small start-ups. Beijing is doing so with huge investments in the sector (the economic incentives by 2020, if China meets its target of 2 million EVs sales might raise well over £11.5 billion) and in state-owned companies (FAW, Chang’an, Dongfeng, SAIC, BAIC, JAC among the largest). Other governments are taking a much more gradual approach. Naturally, these ‘softer’ policies reflect on domestic companies’ ability to keep the pace and in the long run could hinder their competition opportunities or even the motivation to do so. If they do not see a direct reason to radically change their business model, they could keep their course for too long finding themselves too far behind in the end.