Phase 2 approaches and automakers are starting to finally look ahead. Factories are gradually reopening even under strict controls for health and safety. In Europe, since the second half of April, several countries began the process.

In Italy, and especially in the motor valley, the major luxury automakers have put in place measures and plans to succeed in this risky task. If the Italian ‘experiment’ goes well, it would send a positive signal to other countries, and within May other important production hubs could reopen as well. 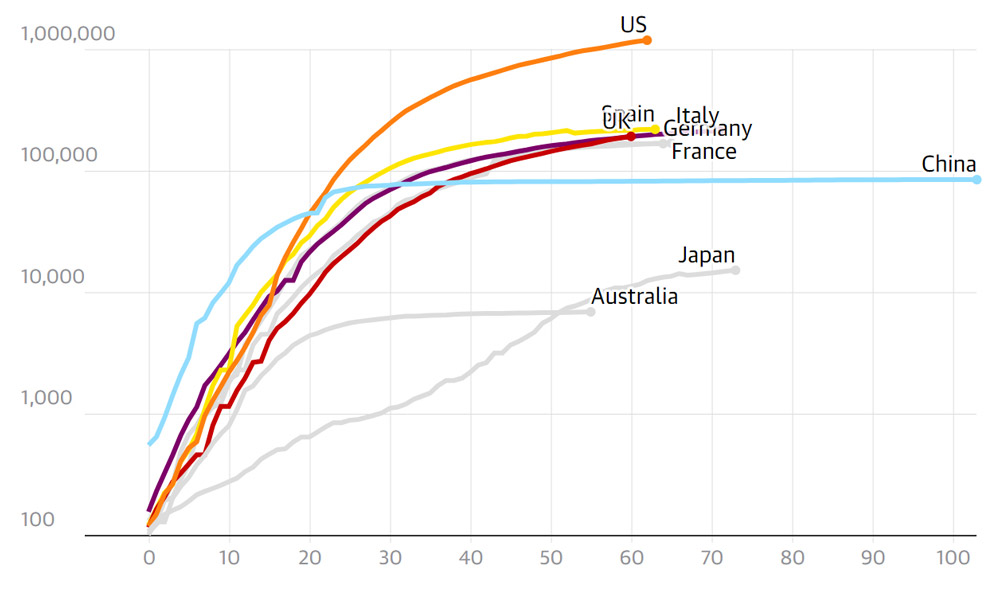 *Source The Guardian from Johns Hopkins

So far, all the companies in the luxury low-volume automotive space have, to some extent, brought examples of cooperation and sensibility to the current condition of our society. Technical knowledge and highly skilled labour allowed each firm to contribute to their respective countries’ efforts.

BUT FIRST, WHAT IS HAPPENING IN THE GLOBAL MARKET?

With regards to automakers’ core businesses, as mentioned in a previous article, low-volume manufacturers so far have suffered less from the impact of the pandemic. Ferrari and Bentley have even reported positive sales results. Nonetheless, even companies that maintained a good sales momentum were hit heavily by the crisis with significant losses on cash flows from all the operating activities.

By observing the data in the 2020 Q1 reports of various automotive companies and groups, a certain degree of correlation between the volume of cars delivered in 2019 and the decrease in sales since January can be identified. This correlation stems from the target customer segment of each company, showing how the luxury market has been affected in a minor way.

Naturally, there are a number of other factors at play. Apart from the resilience of the wealthier consumers, a major one is the geographic penetration and market balance. This is quite evident by comparing VW and Toyota’s data. The German group has a massive presence in Asia, and China being the first country affected by the virus outbreak has also suffered the most in Q1, with a -31% car deliveries, well above the global average of 23%.

Toyota, on the other hand, relies mainly on the US and Japan which have been impacted much later and where the manufacturer sells around twice the vehicles delivered in Europe or China. Similarly, low-volume manufacturers’ largest market is generally the US. This explains how some have even posted positive results in Q1 but could also indicate an increased risk for Q2 now that the American continent is the most exposed to the pandemic.

The other major exception to this trend among the marques included, this time in the luxury segment is Rolls-Royce. The company like its competitors sells mainly in North America, which accounts for a 30% share of the total. But the business in China which had grown fast in 2019 reaching over 20% of the company’s total sales had endured a hard blow. Rolls-Royce CEO Torsten Müller-Ötvös said that sales in the Asian country fell “pretty close to zero”, which would explain, if not all, at least the majority of this decline.

So, how have Italian automotive manufacturers reacted so far? And what measures are they preparing for the gradual reopening of the workplaces in Phase 2?

Ferrari manages to grow and report good sales results even in this difficult start of 2020. Its statement is aligned with the one of 2019 which was already very positive considering the fast growth of the brand in these last few years.

To face the crisis, Ferrari’s 2019 market rebalancing, which saw the fastest growth of the Mainland China, Hong Kong, and Taiwan region with 20.3%, also works in the company’s favour. In 2020, the sharp drop in shipments to the same region (-88.7%) is mainly a consequence of deliveries anticipated in 2019. This means that Ferrari’s in Asia could have offset any significant hit during this period, but is likely to see consequences later on, even if China is already starting its recovery.

In this difficult context, Ferrari is also arguably the company that has distinguished itself the most making the headlines for its help to the community in Maranello and not only, as well as its initiative and planning for the ‘Back on Track’ strategy.

The entire plan revolves around four main objectives. The first is preserving the wellbeing and welfare of the employees. ‘Back on track’ is a complex program to preserve the health and safety of the company’s employees. Put in place by a dedicated team, it consists of behavioural guidelines, medical screening and tracking with an app, and help and support to the families and suppliers within the factory premises. Along with this 3d printed respirator valves have been delivered to hospitals.

Second is the supply chain management, with the increase of inventories to avoid shortages in case of further disruption. The third factor considered is the dealership network support from financial burden, reduced pre-owned market operations, and special geographical allocations based on dealers reopening date. Finally, along with the stop of new hirings, expenditure limitations, and increased digital marketing activities, projects and investments will be reprioritised.

Lamborghini has also emerged quite positively from Q1 in 2020 as predicted by CEO Stefano Domenicali during an interview, with only a slight decline in sales.

In Sant’Agata Bolognese also the activities have been repurposed to focus on the production of medical supply. The automaker has produced every day 1,400 surgical masks and 300 protective shields. 3D printers instead have been used to build 30 new lung simulators.

Mr. Domenicali quoted in a Lamborghini’s press release regarding Phase 2 on May 4th also said:

”We are ready to restart with great energy, but also with strict protocols for safeguarding what is most precious to us: the safety of our people…” “We will constantly monitor the contagion’s evolution and be ready to adjust our protocols in accordance with the guidelines provided by the Italian government and the Emilia-Romagna Region…”

Then continues “We continue to nurture the dreams of our fans and customers, and on 7 May, through a virtual launch, we will present a new car in order to complete our model range. We closed the first quarter of 2020 despite the situation with very positive results…”

So, while working closely with Trade Unions to define a strict plan of behavioural conduct to ensure the safety of its employees, the company actively promotes its business. After almost two months of lockdown, the announced absence at what should have been the Geneva Motor Show looks more like a well-thought-out decision to have an exclusive event instead of just a lack of new models to introduce.

Other Italian companies in a similar market segment, such as Maserati and Pagani have released communication of factories, dealerships, and museum closure. They have not published detailed plan updates regarding Phase 2 though. FCA group is applying health and safety measures in its plants with sanitisation and behavioural guidelines regarding social distancing.

Italian luxury low-volume car manufacturers, coming out of a good 2019, have closed Q1 of 2020 positively in terms of sales, considering the difficulties. The luxury automotive segment, in general, has suffered less from the consequences of the pandemic, and its major players have laid out structured plans to restart production in Phase 2.

A heavier impact though is to be expected in Q2. Not only it started with all the firms in full lockdown but also with Western markets more heavily affected than China’s which instead is already showing signs of recovery. The improving Chinese economy could not be enough anyway to offset the potential loss of companies that rely heavily on the United States market, where the pandemic is still in full swing.